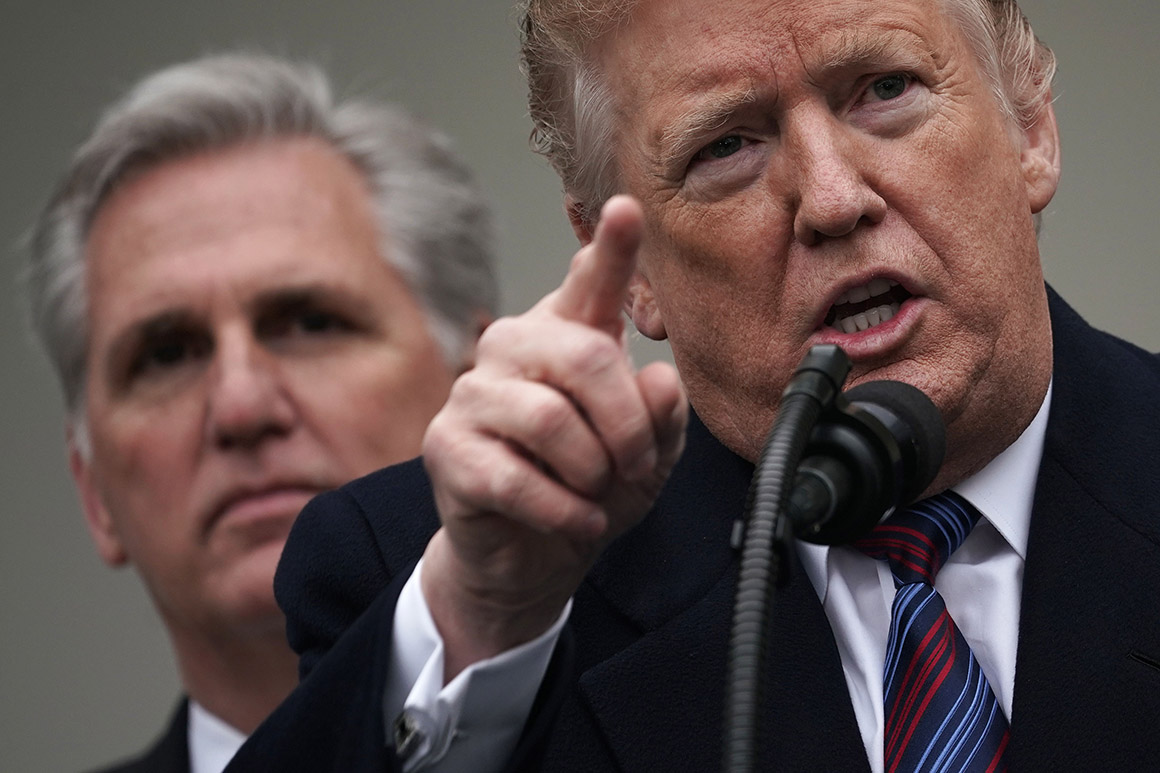 Former President Donald Trump on Friday denied that he had ever accepted any responsibility for the Jan. 6 attack on the Capitol complex.

Trump’s comments in an interview with the Wall Street Journal, while signaling a public détente amid a burgeoning controversy over leaked audio of Kevin McCarthy’s comments in the days after the insurrection, nevertheless put daylight between Trump and the House minority leader, who in a leaked Republican conference call said the former president told him he accepted some responsibility.

“No, that’s false. I never claimed responsibility,” Trump said in the interview at his Mar-a-Lago, Fla., residence, adding that his relationship with McCarthy remained solid following a phone call between the two Thursday evening.

Newly released audio showing McCarthy advocating Trump’s resignation in the wake of the Jan. 6 insurrection prompted speculation as to how Trump would react, and how McCarthy’s longtime bid to attain the House speakership if Republicans win the House in November would be affected.

In the leaked audio of the Jan. 10 phone call, first posted Thursday by The New York Times and aired on Rachel Maddow’s MSNBC show, McCarthy is heard saying he would advise Trump to resign. In a follow up audio release from a Republican conference call on Jan. 11, McCarthy is heard saying: “I asked him personally today, does he hold responsibility for what happened? … He told me he does have some responsibility for what happened and he’d need to acknowledge that.”

Trump told the WSJ that the California Republican had not personally advised him to quit in the days after Jan. 6.

“I think it’s all a big compliment, frankly,” Trump said of McCarthy and his Republican congressional colleagues rallying around the former president after initial public criticism of his actions on Jan. 6. “They realized they were wrong and supported me.”

McCarthy said Friday he had not ultimately asked Trump to resign. “That never took place and nor did it happen,” he told reporters at a California event, adding that he had talked to the former president twice on Friday.

Trump aides on Friday appeared to downplay the effect of the new revelations on Trump and McCarthy’s relationship.

“I would be highly surprised if President Trump allowed these left-of-center journalists and pundits to gain a victory by engaging in this warfare,” Jason Miller, a former Trump spokesperson, told POLITICO.

Trump this week endorsed Ohio senate candidate JD Vance, despite the author’s public criticism of then-candidate Trump in the 2016 presidential race. Vance has since become a bullish supporter of the Trump agenda.

In his endorsement statement, Trump lauded Vance’s position on closing the border and tariffs on China, saying that “unlike so many other pretenders and wannabes, he will put America First.”

Kyle Cheney contributed to this report.

Source: https://www.politico.com/news/2022/04/22/trump-responsibility-for-jan-6-attack-mccarthy-00027335
Droolin’ Dog sniffed out this story and shared it with you.
The Article Was Written/Published By: Craig Howie