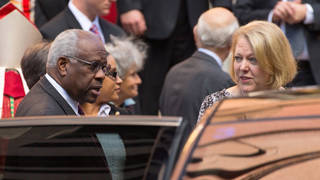 The January 6 committee investigating the deadly attack on the Capitol is reportedly deciding whether to interview Ginni Thomas — the Republican activist and wife of Supreme Court Justice Clarence Thomas — about her efforts to overturn Donald Trump’s 2020 election loss. The move comes after a series of Thomas’s texts were made public in which she urges Donald Trump’s then-Chief of Staff Mark Meadows in the weeks following the election to take action to prevent a Biden victory. Justice Thomas is the only justice who dissented in the Supreme Court’s decision a few months ago that led to the release of White House documents around January 6. We speak with Ian Millhiser, senior correspondent at Vox, who calls Ginni Thomas “a cheerleader at the highest level” for the attempt to overturn the election. “When you’re a judge, you can’t sit on a case where your wife has an interest,” says Millhiser. “If Clarence Thomas knew that his wife was potentially implicated in this scandal, I think he should have recused himself from this case.” Millhiser’s latest piece is headlined “Clarence Thomas’s long fight against fair and democratic elections.”

Source: https://www.democracynow.org/2022/3/29/ginni_thomas_clarence_thomas_democratic_elections
Droolin’ Dog sniffed out this story and shared it with you.
The Article Was Written/Published By: webdev@democracynow.org (Democracy Now!)