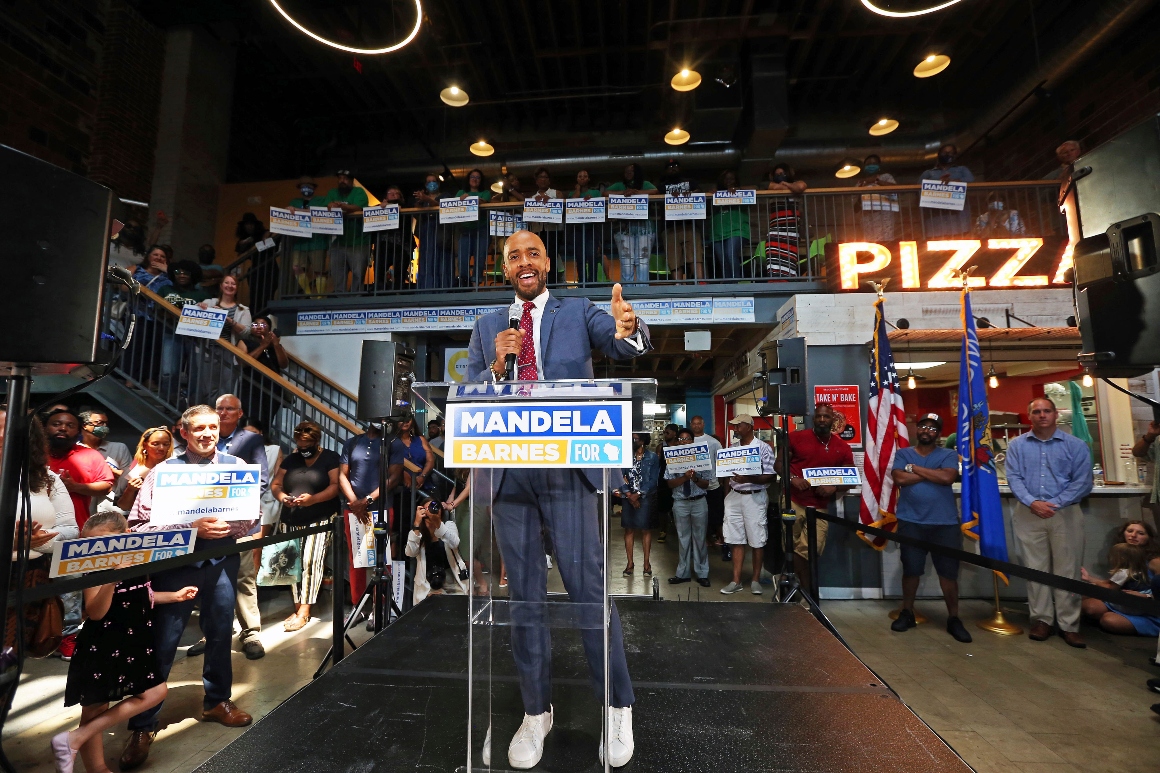 Flipping Wisconsin is a top Democratic priority to bolster their razor-thin Senate majority. But before the party gets a shot at GOP Sen. Ron Johnson, it will need to tackle a crowded, late primary.

Lt. Gov. Mandela Barnes became the latest — and highest-profile — Democrat to join the Senate race when he officially launched his campaign Tuesday. Barnes, 34, is the state’s first Black lieutenant governor and would be the first Black senator to represent Wisconsin if elected.

He joins a crowded primary field that includes seven other Democrats, including state Treasurer Sarah Godlewski, Milwaukee Bucks executive Alex Lasry and Outagamie County Executive Tom Nelson. The Democratic primary isn’t until next August, and whoever wins the nomination will immediately hurtle into a general election less than three months away.

Wisconsin is one of the most closely divided states in the country and is expected to be a top battleground next year. It has one of just two GOP-held 2022 Senate seats where President Joe Biden won narrowly — and with vulnerable Democratic seats in Arizona, Georgia and New Hampshire, it’s key to Democrats’ chances of keeping the majority.

Johnson hasn’t officially declared if he’s running again and has said that doesn’t feel pressure to make a decision anytime soon. But his fundraising ramped up in the past three months, and Democrats are eager to take him on.

Barnes served two terms in the state Assembly before being elected lieutenant governor in 2018 alongside Gov. Tony Evers, who is running for a second term. Evers praised Barnes in a statement but did not offer an endorsement in the race — a sign of Democrats’ broader hands-off approach to the congested primary.

The race marks the first competitive Democratic Senate primary in Wisconsin in three decades: Now-Sen. Tammy Baldwin was unopposed in the 2012 primary, and former Sen. Russ Feingold was essentially unopposed in the 2016 primary ahead of his rematch with Johnson.

In an interview, state Democratic Party chair Ben Wikler compared the upcoming effort over the next year to the party’s preparation during the presidential primary ahead of 2020. He said the party would do early organizing work and build a statewide apparatus to ensure the nominee “hits the ground at 100 miles per hour to sprint through the tape.”

“The key thing is to not allow the late primary to become a disadvantage. And we can succeed on that front if we do the organizing and investing work early through the state party and through all the other way people engage in these races” ahead of the general election, Wikler said.

Befitting Wisconsin’s history of progressivism, most of the Democratic candidates are touting their liberal bona fides. But Barnes got early endorsements from the Howard Dean-linked Democracy for America and the Collective PAC, which supports Black candidates.

Quentin James, a co-founder of the Collective PAC, said Barnes’ previous statewide success demonstrated that he was worth an early boost in the Senate primary.

“He is a current lieutenant governor of one of the most important states electorally in this country and has an amazing track record of implementing progressive change. Why wouldn’t we endorse him on day one?” James said in an interview.

In a video launching his campaign, which featured different shots of him jogging and meeting with voters on the campaign trail, Barnes focused on his working class roots and issues like health care, climate change and voting rights, which could become central to his bid.

“I believe we need to build a better America where the opportunity that I was able to find isn’t so rare,” he said during his announcement.

Barnes enters the race several months after the other high-profile candidates, who have already been fundraising and campaigning across the state.

Lasry, who is on leave from his job with the NBA franchise while running, led the field in fundraising over the past three months, hauling in more than $1 million for the second consecutive quarter without any self-funding (he gave $50,000 last quarter). Godlewski, who received an endorsement from EMILY’s List in late June, raised $513,000 in her first quarter in the race. She is the only other candidate, along with Barnes, who has won a statewide election. Nelson was the only other Democrat to raise six figures, hauling in $240,000.

The Democratic Senatorial Campaign Committee has not yet endorsed any candidates in primaries, a break from the committee’s approach in 2020, when it made early endorsements in several battleground races.

David Bergstein, a spokesperson for the DSCC, said Senate Democrats are “assessing the candidate fields carefully, holding Republicans like Sen. Johnson accountable and building the campaign infrastructure our nominee will need to win the general election.”

Johnson outraised all of the Democratic contenders last quarter, hauling in $1.2 million to give his campaign $1.7 million in cash on hand. He has repeatedly said he’s undecided on running for a third term, despite pledging to retire when seeking his second term in 2016.

He said during a June appearance at the Milwaukee Press Club that his past promise is a factor in his decision-making, but that Democrats’ complete control of Washington and his opposition to Biden’s agenda altered the circumstances of his decision.

Johnson also said he thinks campaigns are too long, and that he was doing “nothing to hamper our ability as the Republican Party” to hold the Senate seat next fall by delaying his decision. Republicans have competitive primaries in five other states where GOP senators retired, and they would likely face an equally tough nominating contest in Wisconsin if Johnson doesn’t run.

“While Wisconsin Democrats trip over themselves to prove who’s more liberal, Sen. Ron Johnson continues to work hard to bring common sense to Washington and fight for the people of Wisconsin,” said Lizzie Litzow, a spokesperson for Senate Republicans’ campaign arm.

Johnson has become a controversial figure in Washington, drawing Democrats’ ire for his strong defense of former President Donald Trump and comments playing down the Covid-19 pandemic and questioning the safety of coronavirus vaccines. Some Democrats want to face the GOP incumbent again.

“In that environment, I think it’s less about electability and more about who do Democratic primary voters like the most,” said Joe Zepecki, a veteran Democratic strategist in the state.

It remains to be seen how much of the crowded field makes it to the primary ballot in August. But given the 50-50 Senate, the importance of Wisconsin and the party’s success with small-dollar fundraising, Democrats aren’t worried about the primary winner not having enough money to compete against Johnson.

“Whoever it is will have a cheddar bomb of online donations waiting for them the next day,” Zepecki said.

Source: https://www.politico.com/news/2021/07/20/democrats-wisconsin-primary-ron-johnson-500370
Droolin’ Dog sniffed out this story and shared it with you.
The Article Was Written/Published By: James Arkin