The Russian Foreign Ministry has said that negotiations with the Taliban are an essential part of the internationally agreed strategy to end the decades-long conflict in Afghanistan, as American troops pull out of the country.

Speaking to the Russia-1 news channel on Sunday, diplomatic spokeswoman Maria Zakharova said that her country backs talks, despite having clear reservations about the Islamist militant group, which is banned as an extremist organization in Russia. “The Taliban movement is prohibited in our country,” she said, adding that Moscow “reaffirms in every possible way its determination to fight against international terrorist activity.”

“There is a small and important nuance,” Zakharova added. “The Taliban movement is part of the inter-Afghan dialogue. This is the very dialogue that the Security Council [at the UN] has called on all countries to facilitate.” She said that by holding talks with all sides, Russia would continue to champion that process. 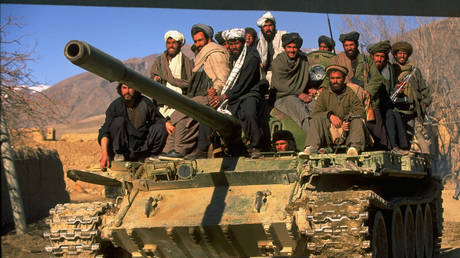 Sanctions against Taliban could be lifted as part of Afghan peace process, top Russian diplomat tells RT in wake of US withdrawal

Last week, a top Russian UN envoy, Deputy Permanent Representative Dmitry Polyanskiy, told RT that the country was prepared to work within the framework for peace talks agreed by the Security Council. “We support the inter-Afghan negotiations, and all our efforts are aimed at facilitating the start of substantive talks between the two sides.”

“For that reason, we supported the travel ban exemption… for Taliban representatives to let them participate in peace talks.” A delegation of Taliban political representatives visited Moscow for negotiations at the beginning of the month.

He went on to say that existing UN resolutions opened the door to sanctions against the Taliban being dropped, given the right circumstances and progress in peace talks. The body expressed “its readiness upon the commencement of the intra-Afghan negotiations to consider the start of the review of the status of designations of individuals, groups, undertakings and entities on the list.”

Last week, British Defense Secretary Ben Wallace said that London would be prepared to engage with the Taliban, “provided it adheres to certain international norms.” However, he warned that any such arrangement would be reviewed “if they behave in a way that is seriously against human rights.” 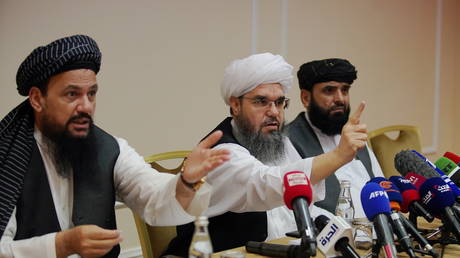 Britain willing to ‘come to terms’ with Taliban and work with enemy for sake of peace if it ‘behaves’, UK defence secretary says

The militant group has been gaining ground in the troubled Central Asian nation for weeks, with US forces ramping down their presence after two decades stationed in the region. American President Joe Biden has said that all of his country’s forces will return home by the 20th anniversary of the September 11 attacks this year.

Source: https://www.rt.com/russia/529628-taliban-talks-peace-afghanistan/?utm_source=rss&utm_medium=rss&utm_campaign=RSS
Droolin’ Dog sniffed out this story and shared it with you.
The Article Was Written/Published By: RT