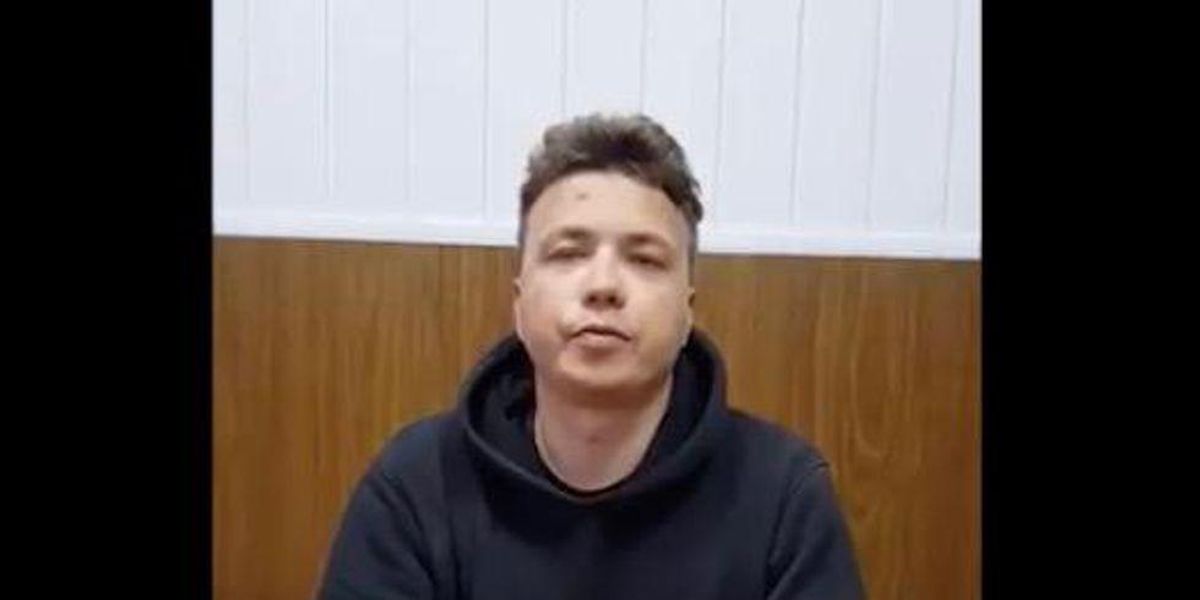 Roman Protasevich doesn’t look like much of a threat to Europe’s last dictator. A fresh-faced 26-year-old, he has never been elected to public office nor has he stood as a candidate. What this blogger and co-recipient of the European parliament’s Sakharov prize for freedom of thought has done, however, is regarded as just as dangerous by Alexander Lukashenko’s regime. He has helped to ensure that the world knows about the pro-democracy movement in Belarus.

The Belarusian journalist and activist was on his way back home to Lithuania when his Ryanair flight was diverted from its route on the pretext of a security alert and “escorted” to Minsk airport by military aircraft. It was clear that Protasevich was the target of this operation when police arrested him along with his Russian girlfriend, Sofia Sapega, a law student, before allowing the flight to resume.

Nexta, the channel on the social media platform Telegram that Protasevich co-founded and formerly edited, has become one of the main tools in the Belarusian resistance movement that developed since last summer’s disputed presidential elections in which Alexander Lukashenko claimed victory. Pro-democracy campaigners use the channel to inform supporters of the details of protests as well as to publicise reports and images of brutal attacks on protesters by the security services.

Within Belarus, the government’s control of digital as well as traditional media is tightening relentlessly. Last week Minsk blocked the independent news website tut.by, the country’s most popular non-state media outlet. On Monday further restrictions on journalists were announced, including a ban on the live coverage of unsanctioned protests and on organising or participating in “mass events” that they report on.

The fact that Nexta has its offices in Poland means that Minsk has so far been unable to shut it down. But as Protasevich discovered on Sunday, Lukashenko’s regime is willing to break international agreements in order to catch, punish and silence those who defy him. There are real questions about the safety of leading Belarusian opposition figures living in exile – especially Svetlana Tikhanovskaya, the woman widely regarded as the real winner of the August 2020 presidential election.

Read more:
Belarus: opposition pressure continues inside and outside the country – will it work?


One of her strategies is to meet with world leaders in order to keep the pro-democracy movement on the international agenda and press for further measures against Lukashenko. The arrest of Protasevich makes it clear that travel, even between democratic countries, poses considerable risks for all Belarusian opposition figures. The manner of his detention serves as a stark warning that there is no safe refuge for Lukashenko’s opponents.

When it was clear that the Ryanair flight was going to land in Belarus, Protasevich reportedly turned to a fellow passenger and remarked that this would end in his execution. He was not exaggerating. His name has been placed on a list of terrorists by the state’s security forces, and the penalty for terrorist offences in Belarus is death.

Belarusian prison is a dangerous place for anyone arrested for political crimes, regardless of the official charges. Protesters who have spent time in detention have been subjected to severe physical abuse including torture and rape. Others die in suspicious circumstances.

Just last week, Vitold Ashurak, a member of the opposition party Belarusian Popular Front, is reported to have suffered a fatal heart attack while serving a five-year prison sentence for participating in protests.

Worrying reports of Protasevich’s condition began to surface only a matter of hours after his detention. The journalist’s mother received messages that her son had been hospitalized due to heart problems. His medical history lent these messages some credibility.

By Monday evening, however, a short video recording of Protasevich surfaced on a pro-regime Telegram channel. Looking tense and sporting what looks like bruising on his face, the journalist denied any ill-treatment or health problems and claimed to be cooperating with the authorities, including confessing to organizing “mass riots” in Minsk.

Tikhanovskaya also featured in a “hostage-type” video making a similarly unconvincing confession shortly before she fled from Belarus in August 2020. She later confirmed that her performance had been coerced, using threats to her family.

Attention has understandably turned to the measures that the EU and others might take against Lukashenko, but it is also important to focus on what this latest episode reveals about politics in Belarus.

While it may appear that Lukashenko holds all the cards, the lengths that the regime is willing to go in order to attack its critics is a sign of fragility rather than strength. A political leader who is fully in control of society does not need to arrest citizens for wearing the wrong color socks, let alone hijack an aircraft to kidnap a young blogger. The regime’s insistence on stamping out every manifestation of dissent, no matter how minor, is only matched by the determination and resilience of ordinary people who continue to mock and defy it.

Although repression and violence have so far enabled Lukashenko to cling to power, cracks are reportedly emerging within the security forces that are his ultimate tool against opposition. It is becoming increasingly clear that this regime has little left to offer that its constituents find appealing.

Source: https://www.rawstory.com/roman-protasevich-dissident-belarus-journalist-whose-defiance-enraged-europes-last-dictator-2653115142/
Droolin’ Dog sniffed out this story and shared it with you.
The Article Was Written/Published By: The Conversation