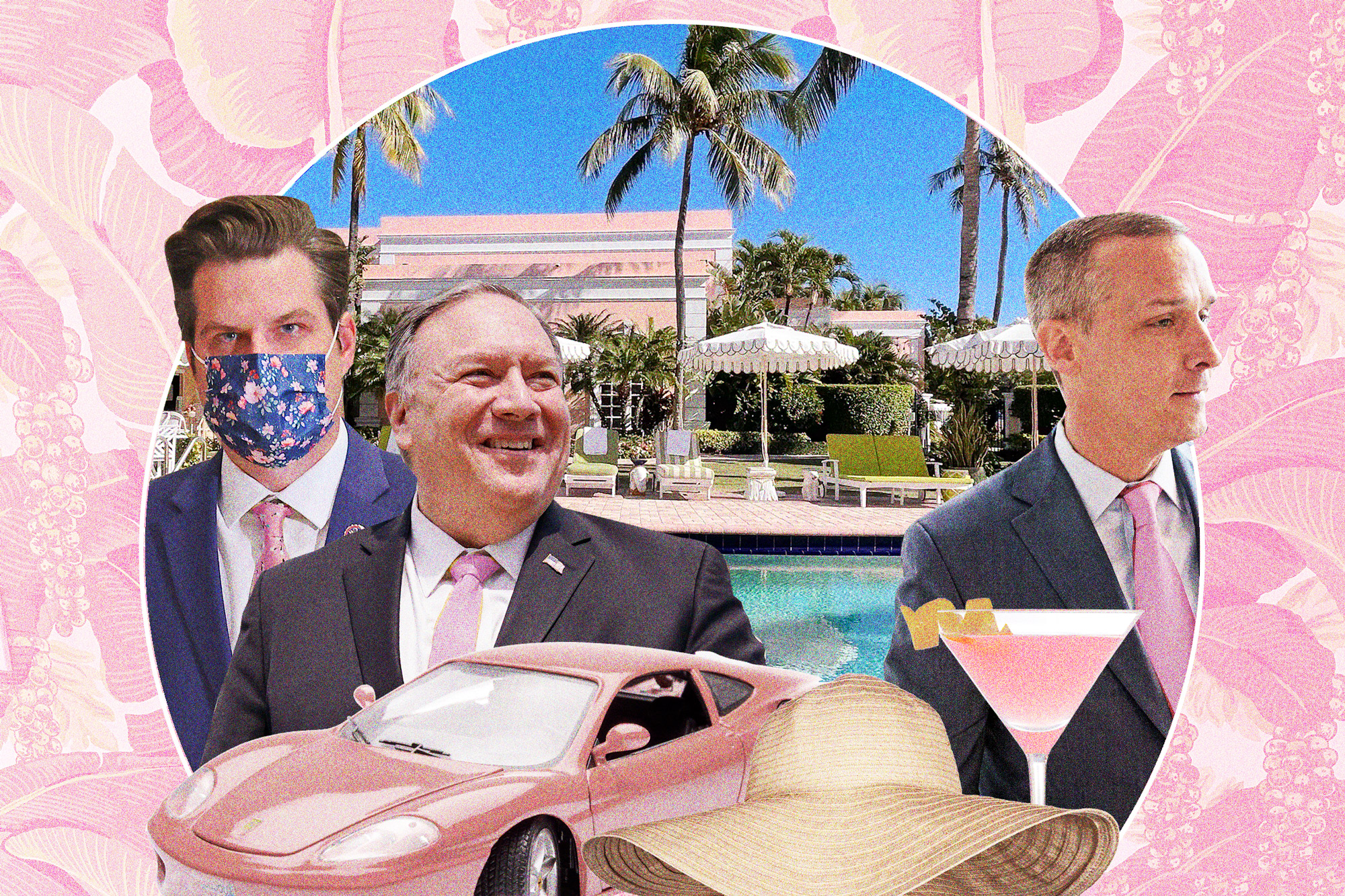 When I told a Breitbart reporter I would be leaving Covid-wracked New York and my cramped Brooklyn apartment to spend a month and a half in balmy Florida, he called me a “political refugee in the land of Ron DeSantis.”

I didn’t know then how right he was.

I wanted to get to a fingertip feel for what had become the new center of the GOP’s political universe—Palm Beach, where top Republicans were migrating to soak up the Florida sunshine, liberate themselves from Covid-19 rules they view as overly restrictive and bask in the glow of Donald Trump, who has set up his post-presidential court at his Mar-a-Lago beach club.

What better place to see up-close the jockeying for power and influence at this especially fraught and uncertain time in American politics, with Trump still claiming the 2020 election was stolen from him, while playing coy about his plans for 2024.

But first, I needed a Covid test. Vaccines for my age group were still weeks if not months away, and I had zero intention of catching it—I had made it this far! In my deep-blue Brooklyn enclave, I took the disease with seriousness verging on paranoia: I bleached my food, I wore a mask while running, I applied anti-microbial gloves for the subway, and I waited for hours in cold, long lines every week for a swab in the nose. Anthony Fauci would have found me extreme.

But in Palm Beach, it was surprisingly easy to get tested. You could simply go online and book a spot 15 minutes ahead of time without the Hunger Games-style scheming required in New York. I tested myself so often the Palm Beach County health authorities practically greeted me like Norm stepping into the bar on “Cheers.” Perhaps the ease was because no one else there wanted to get tested, but for all the national criticism of DeSantis’ anti-lockdown approach to the pandemic, my general impression was that Florida had figured out a few things that eluded New York’s by-the-book political leaders. Or had they just reached herd immunity by the time I arrived? 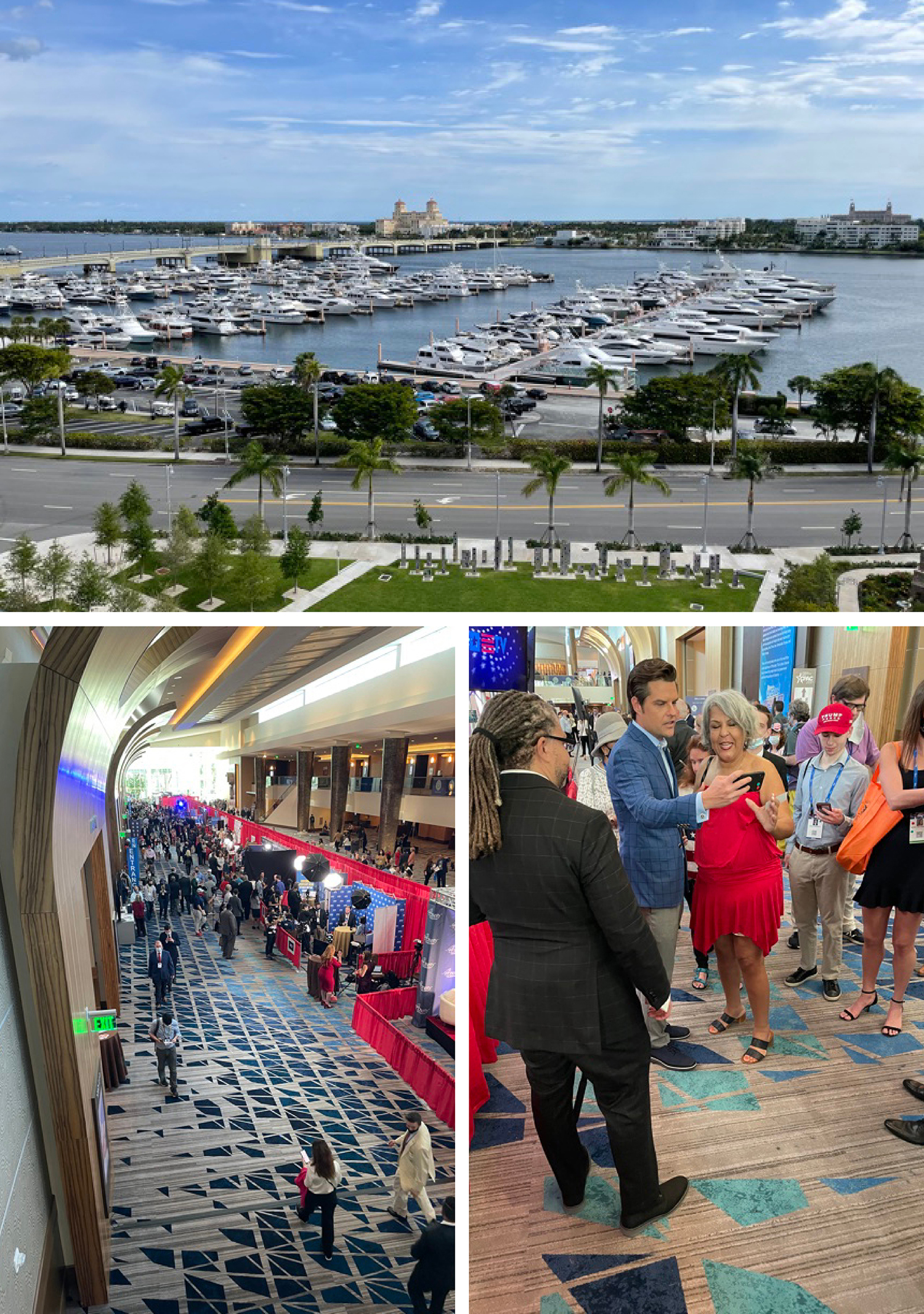 My first journalistic task, though, was covering the Conservative Political Action Conference 170 miles away in Orlando, which was the base-tan burn I needed to adjust to life in the center of the Republican resistance. The three-day conference, which was in a way a massive political protest against Covid restrictions, was my first introduction to Florida’s devil-may-care culture around the pandemic. Minders had to be installed just to enforce mask wearing. Some of those masks were mesh. Any attempt to encourage social distancing was a joke as crowds thronged to the GOP’s rising stars.

Back in Palm Beach, I ate dinner al fresco every night. Sure, the tables weren’t six feet apart, but DeSantis said the virus doesn’t like humidity, so they crammed us in at trendy restaurants like Le Bilboquet. The infamous Manhattan boîte had just opened its Palm Beach sibling in February. And already flocks of well-to-do women in pearls and wide-brimmed hats took over the patio for lunch, while their bronzed, blonde and younger successors danced all night to electronica beats with men whose hair was so full and slick that they could have been Spanish royals. But this scene wasn’t too ostentatious for Ron DeSantis, who dined at the French restaurant in a private room in May.

While I was twitching over the sheer mass of people, the other 30-somethings at my table, who were riding out Covid with their wealthy parents, didn’t flinch. They were all vaccinated—at least one shot. “It’s basically 80 percent immunity,” one woman explained, as a French speaking waiter hoisted around a bottle of Moet & Chandon that shot sparklers while people stood up at their tables to clap and dance.

My Covid anxiety peaked days later when I walked into a packed sports bar. There were no plastic shields breaking up the bar tops, just people shoulder to shoulder eating and breathing viral loads all over each other.

“I’ve already had Covid,” a bartender reassured me as she saw me standing at the bar uncomfortably with my surgical mask. “We all have.”

I told my friends I had to go before I even sat down.

I realized that if I was going to survive in Florida, I needed a vaccine. I asked one of my new friends how they had landed a jab at 36. No shocker—there was a concierge doctor hooking up the rich with vaccines based on random pre-existing conditions. If I wanted one, I needed a referral. I passed. I would just wait for Publix.

Despite the exorbitant wealth in Palm Beach, I rarely saw real, Hollywood celebrities. Sylvester Stallone had recently bought a house and Bill Murray was randomly spotted at a hotel in town, but no young, hot A-listers. This was a town full of bright paisley dresses and velvet loafers worn by the scions and heiresses of the bluest bloods in America. And yet, they weren’t craving celebrity sightings. They were sufficiently amused by the Trump stars who blew through town.

There was Lindsey Graham at the rooftop restaurant at the Ben Hotel. Mike Pompeo spotted with his security detail at The Colony, advertised as “the pinkest boutique hotel in Palm Beach.” Matt Gaetz hiding behind a surgical mask at a reggae bar, mainly to disguise himself from fans asking for selfies and sending over shots. Then there was Rudy Giuliani holding court at Café L’Europe, talking about a book he’s working on and his low-key visits to Mar-a-lago. At Buccan, there were Trump ambassadors ducking his key-note address at the RNC retreat to have dinner with Democratic lobbyist Tom Quinn, whose son Piper owns the trendy hot-spot.

At Cucina, a place widely dubbed “Covid-cina” because it was packed with people violating distancing rules under disco balls, Corey Lewandowski was spotted in the back of the dance floor. (Hogan Gidley was seen at the same haunt but outside at what Cucina called its “beach,” which was in reality the back parking lot filled with sand. Gidley, a former White House aide who like many others down in West Palm was cashing in on his Trump-world celebrity, was there mingling with socialites, who threw a party for, to quote the invite, “the campaign for the Leukemia & Lymphoma Society’s Woman of The Year for Palm Beach and the Treasure Coast.”) 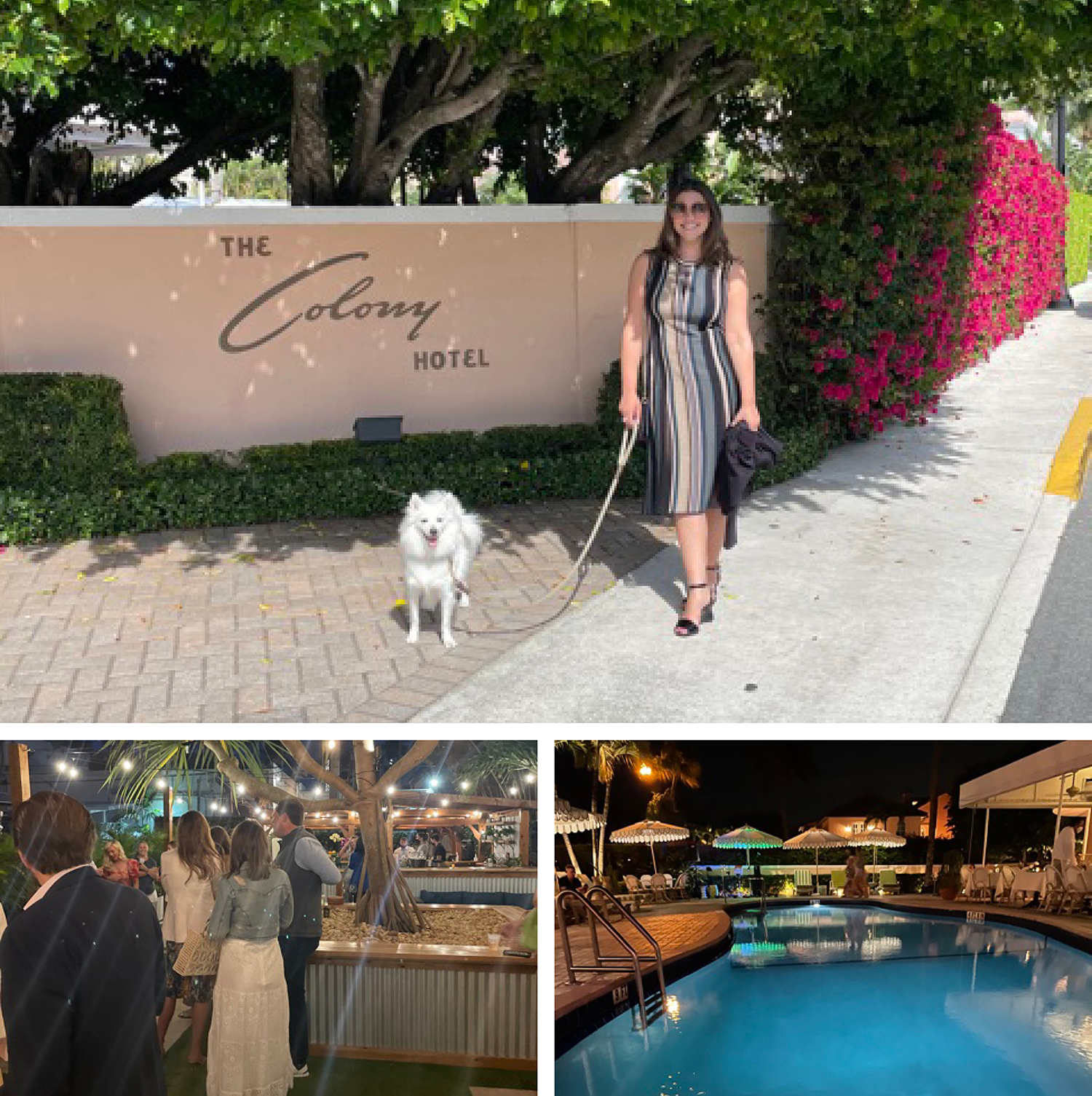 I found that name-dropping Jason Miller—Trump’s de facto post-presidential spokesman and gatekeeper—to a hostess could get you a better table at Palm Beach Grill. When I considered moving to Palm Beach permanently, it was a former Trump ambassador who tried to sell me real estate.

Everywhere you looked there were Bentleys, Ferraris and Rolls Royces. (Even the county clerk drove a red Ferrari.) The price of chicken at Café Boulud was $45. My dog Pancetta was served first at brunch. The big debate every weekend was whether to go to Polo in Wellington or have brunch at Sant Ambroeus, where David Beckham was eating with his future in-law, billionaire Nelson Peltz. Is that Republican strategist Ryan Williams ransacking the Stubbs & Wootton end of season sale?

Within a month, I was fully enmeshed in the culture. My Covid-phobia waned to the point where even I started questioning Fauci and the CDC. Why did we have to wear masks outside? Here in Florida everyone was happy. People sat at long tables at brunch and walked from table to table to chitchat with others. I bought a thinner, leopard mask. After all, it was hot outside.

At one point, a local couple (originally from New York, of course), asked if I was a socialite as I sipped on iced coffee under a wide-brimmed straw hat at the posh Royal Poinciana Plaza with my Pomeranian-like dog.

I joked that I was undercover. “I’m actually a political reporter,” I confessed.

They were thrilled to meet a young woman with a job, who of course, reminded them of their daughter.

“You should really go after that Hunter Biden story,” the husband said.

Just another day in Palm Beach.

Source: https://www.politico.com/news/magazine/2021/05/13/two-months-donald-trump-utopia-488068
Droolin’ Dog sniffed out this story and shared it with you.
The Article Was Written/Published By: Tara Palmeri