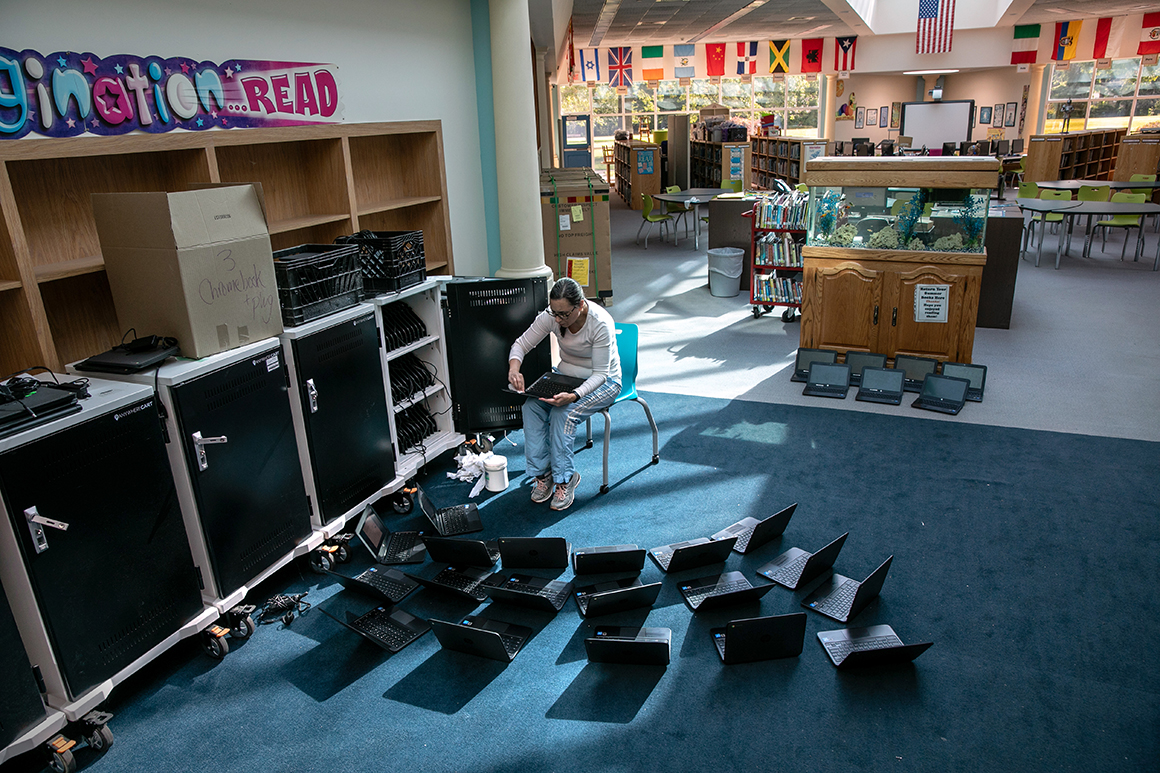 Kristen Record, a science teacher at Bunnell High School in Stratford, Conn., looks forward to the day she can use regular lab equipment again. Teaching AP Physics through a computer is hard, even for Connecticut’s 2011 Teacher of the Year.

Record’s taught pupils over Zoom for most of this school year, but some students never appeared on her screen. Even after students had the choice to remain remote or return to the classroom, she estimates about 10 percent didn’t show. Emails to their homes went unanswered, or listed family phone numbers were no longer in service. It was like pushing information into a black hole.

“I have missing kids,” Record said. “Kids that are on my roster who I haven’t seen in weeks, and are not going to pass my class. I wish I could go to their home and sit and talk them through whatever is going on. I wish a team of us could be doing that.”

In December, Connecticut Democratic Gov. Ned Lamont declared his state the first in the country to get a laptop computer for every elementary and high school student who needed one for remote learning.

That moment was significant, and not just because state education commissioner Miguel Cardona was on the verge of being named President Joe Biden’s pick to replace Betsy DeVos as education secretary in Washington. Record marveled at how quickly her students and classes shifted to online learning. One former Lamont aide likened Connecticut’s benchmark to nailing the final, golden spike into the transcontinental railroad. 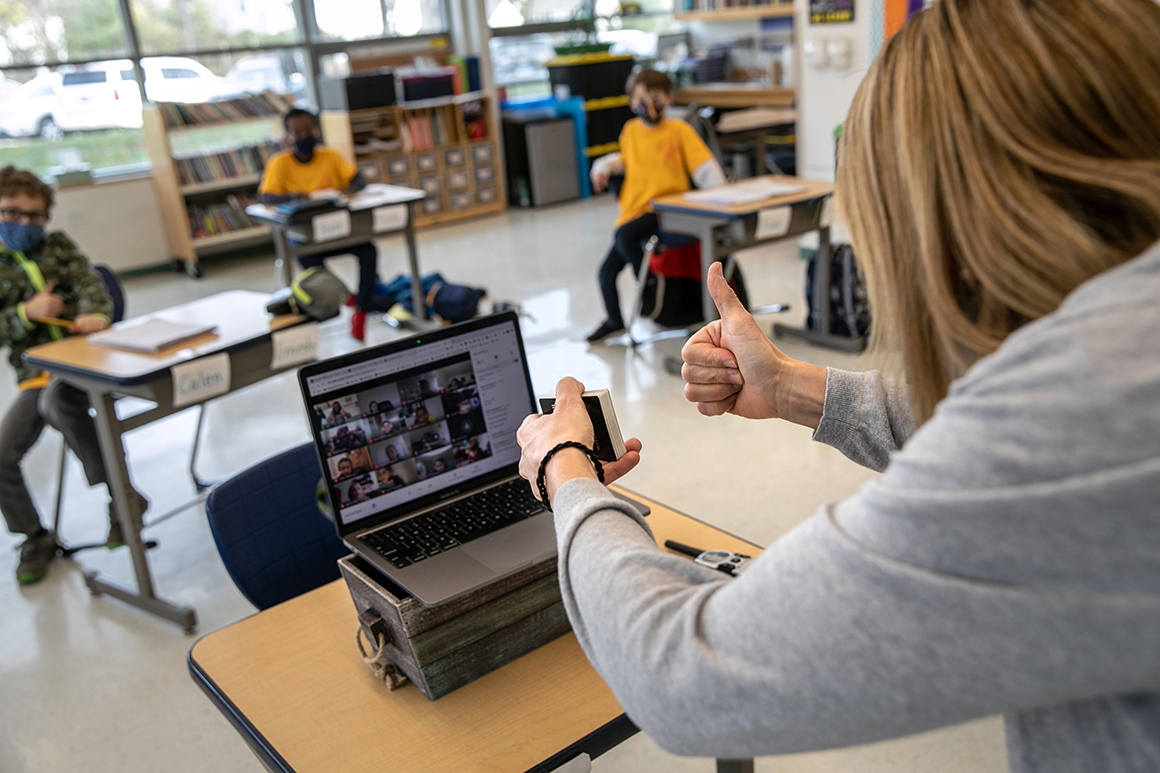 Yet Connecticut’s experience in the months that followed shows how closing the digital divide is more nuanced than simply connecting kids to Chromebooks.

Thousands of Connecticut’s students did not log onto remote classes, even after the state allotted tens of millions of federal aid dollars for its ambitious remote learning program. Many families didn’t take advantage of subsidized internet. It’s still not clear how many students originally needed connections, the state’s education technology director said, nor is it certain how many children are still disconnected from remote learning today.

“We have this misconception that ‘if you build it, they will come,’” said Doug Casey, the executive director of the Connecticut Commission for Educational Technology.

“The big takeaway for us,” Casey said, “is that there is a lot more to all this remote and blended learning than simply a connection and a device. That’s table stakes. That does not get you to success any more than every kid getting a textbook ensures they all get A’s.”

Researchers estimate as many as 17 million school-age children couldn’t afford or access a device or home internet connection during the pandemic. The problem most severely affected Southern and more rural states, and disproportionately minority and lower-income students. Washington first responded in March of 2020 by sending states and schools tens of billions of dollars they could use to purchase needed technology.

Connecticut’s ensuing plan to link students in need with devices and connections had a few inherent advantages. Lamont is a former telecom executive. A nonprofit venture connected to the state’s wealthiest couple, billionaire philanthropists Barbara and Ray Dalio, purchased 60,000 laptops for high school students when the pandemic began. Plus, officials devoted to solving the problem didn’t face some of the hurdles that bedevil rural states or large urban districts.

By July, Lamont’s administration announced it would spend $43.5 million of federal aid to purchase tens of thousands of additional laptops and a year of home internet connections for students who needed them. Then came the hard part.

Connecticut’s first challenge was measuring the problem’s scope. Without a definitive map showing where kids were connected or disconnected from remote classes, authorities leaned on school districts to estimate how many students needed Windows laptops, Google Chromebooks and web access. 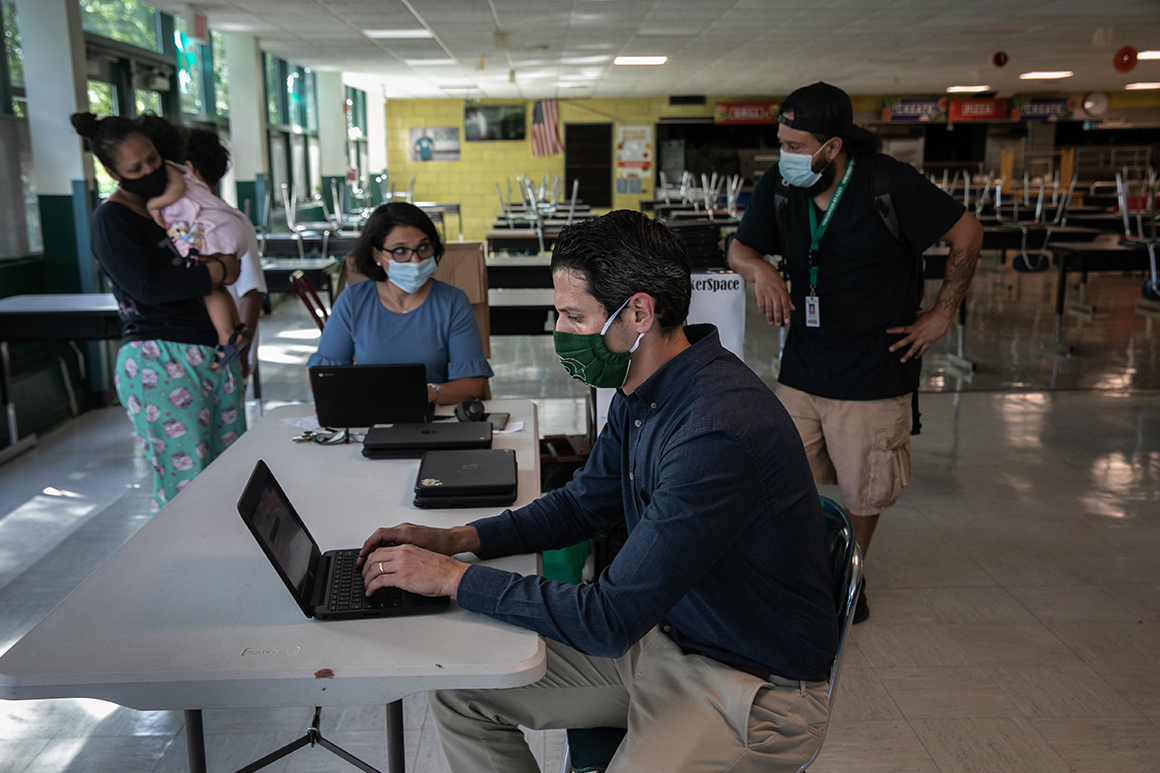 Finding the right connection for a student depends not only on where their family lives, but the circumstances in which they live. A swarm of companies offer access in a patchwork format that varies from region to region. That’s assuming people live in spots with infrastructure for hard-wired connections or reliable cell coverage.

“It’s not like going to Dell and just cutting them a check,” said Nick Simmons, Lamont’s former director of strategic initiatives who was recently appointed to a top federal school reopening post under Cardona.

Still, efforts like Connecticut’s closed some of the country’s homework gap. Majorities of the nation’s households report their children’s school or district provided devices for educational purposes, according to data from the Census Bureau’s Household Pulse Survey. A recent estimate from the Boston Consulting Group concluded states closed as much as 60 percent of the K-12 “device divide” by December, and up to 40 percent of the “connectivity divide,” with help from federal funding and the private sector.

Yet the consulting group estimated up to 12 million K–12 students were still “under-connected” in the U.S. going into 2021 because of issues including poor broadband mapping data, infrastructure and supply chain problems, plus inadequate funding. Tens of billions of dollars in new spending are needed to permanently close the divide, BCG said.

Even when all schoolchildren are able to return to the classroom, the connectivity issue won’t go away. The pandemic has changed a lot about teaching and learning in America, including more deeply integrating online tools, homework and hybrid communications into the nation’s education system. So, reducing the homework gap will remain a national priority.

But in the long term, experts say more connections won’t erase the problem. A 40-page report from the Connecticut education technology commission, released in February after the state asked schools to identify barriers to getting families online, set out some of the reasons why.

Many Connecticut districts assumed remote learning would be predominant this year, but schools were able to provide in-person instruction at higher-than-expected rates. That led to less demand for home broadband.

Some families didn’t want to share their personal information with cable carriers, ran into language barriers, or feared they’d be on the hook for hidden costs or commitments. Carriers sometimes improperly delayed access for families who had past-due balances on their bills. Many families didn’t get connected because of housing instability. Others struggled with the limited capacity of a single cable connection.

These factors, and an array of related concerns, meant many students simply did not log on.

His administration is also now channeling nearly $11 million in stimulus funding into door-to-door outreach in 15 school districts. The effort’s intended to prod students who struggled with absenteeism and disengagement back to classes, help them enroll in summer learning and prepare for the 2021-22 academic term. The state also hopes the home visit program will help officials connect families with behavioral or mental health services and learn about their access to child care and technology.

“We just lack the social services resources that are necessary to truly engage with those families and those kids that are disengaged from the school community,” Record said. “The school counselors, the social workers, and the school psychologists in my school district are putting in tremendous amounts of work and tremendous hours, but there’s not enough of them. That’s where I see where the plan sort of fell down.”

Something as simple as more face-to-face contact might help set out the new normal for schooling, in a world where some educators and technology experts aspire to transform old-school classrooms into rich environments for students — whether they’re in the building or not.

“It might mean creating a digital school or remote school,” Norwalk Public Schools Superintendent Alexandra Estrella said. “It might mean having elements of it infused in our day-to-day practices within our own infrastructure, to prevent learning loss for things that may not be Covid related.”

That might mean classes someday operate seamlessly between online and brick-and-mortar environments, with campus technology coordinators who help families troubleshoot glitches. It could include school buildings equipped with Wi-Fi equipment strong enough to beam connections to surrounding neighborhoods so entire families can apply for jobs and access telehealth services, or school buses that serve as hotspots for students on their daily commutes.

But if Record had a magic wand, she’d start with hiring humans.

“That’s what I think is missing from the current model of what’s going on, and what happened in the past,” she said. “We need more people to engage more often with families, and we simply don’t have the capacity to do that right now.”

Source: https://www.politico.com/news/2021/04/29/remote-school-technology-479353
Droolin’ Dog sniffed out this story and shared it with you.
The Article Was Written/Published By: Juan Perez Jr.