A bottle-throwing ceremony marked the launch of Taiwan’s domestically developed ‘Yushan’ vessel, the navy’s 10,000-ton-class amphibious transport ship, which will enter service in 2022.

Speaking on Tuesday, President Tsai Ing-wen hailed the “milestone” in the country’s indigenous warship building plans as the amphibious transport vessel was launched. “I believe that this ship will certainly strengthen to navy’s ability to fulfil its mission and further solidify our defenses,” she said.

The navy claims that the ship, named after Taiwan’s tallest peak, will be tasked with amphibious operations, material transport for outlying islands, as well as domestic and international humanitarian rescue.

Cheng Wen-lung, chairman of state-backed CSBC Corporation Taiwan, the company which built the vessel, said the ship has space for landing craft and helicopters.

“During wartime it will have an amphibious warfare mission, bringing in reinforcements and fighting to retake offshore islands,” Cheng noted, adding that the vessel has a “stealthy exterior” and electromagnetic pulse protection. 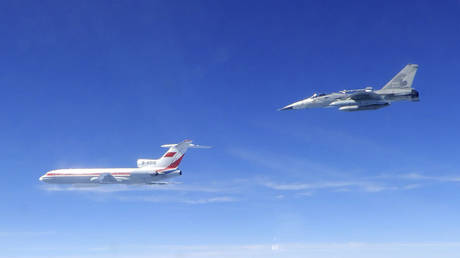 Tsai’s government has invested heavily in the modernization of its armed forces, with the air force receiving the majority of the big-ticket purchases, including new and upgraded F-16s. Apart from domestic production, Taiwan has struck several deals to buy military hardware from the US.

The vessel’s launch comes amid increasing tensions in the South China Sea. On Monday, Taiwan accused the Chinese People’s Liberation Army (PLA) of its largest incursion of the nation’s air defense zone with jets and nuclear-capable bombers buzzing its airspace.

Beijing’s move came as the US and Philippines militaries kicked off joint wargames, as Chinese vessels remain anchored in a reef claimed by Manilla in the South China Sea.

Washington and Beijing have increasingly accused each other of provocations in the contentious South China Sea. Beijing says the US is meddling in its internal affairs as it considers Taiwan an integral part of its territory.

Source: https://www.rt.com/news/520872-taiwan-transport-domestic-warship-china/?utm_source=rss&utm_medium=rss&utm_campaign=RSS
Droolin’ Dog sniffed out this story and shared it with you.
The Article Was Written/Published By: RT