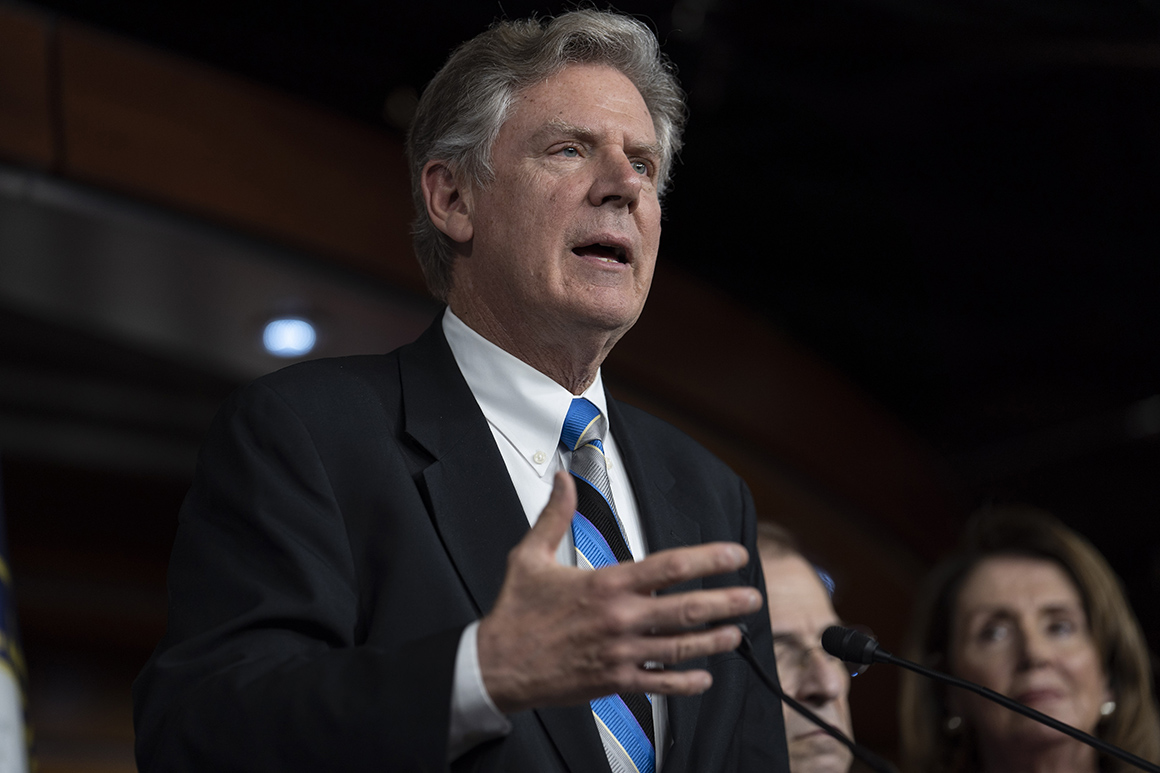 Senior House Energy and Commerce Democrats unveiled a template of their plan to combat climate change this Congress that would take a sector-by-sector approach to eliminate carbon dioxide and reach net-zero emissions by 2050.

Their 981-page bill — an expanded version of last year’s CLEAN Future Act — calls for a federal clean energy standard that sets an interim goal of 80 percent clean electricity by 2030 and 100 percent by 2035. The bill represents a push from Democrats for aggressive action on climate change that’s in line with the goals laid out by President Joe Biden and as part of his Build Back Better agenda.

“I really believe that the time for slow, marginal change has gone,” Chair Frank Pallone (D-N.J.) said Tuesday. “You can’t just watch from the sidelines as the climate crisis wreaks havoc on Americans’ health and home. The cost of inaction is staggering — it already is.”

Pallone, Environment Chair Paul Tonko (D-N.Y.) and Energy Chair Bobby Rush (D-Ill.) unveiled the bill at a virtual press conference. They plan to take up the legislation through regular order.

Pallone also acknowledged that the bill did not call for imposing a price on carbon emissions, since that type of measure lacked political support.

“We don’t have a carbon tax … I think it’s time to try something new,” he said. “The votes are just not there for a price on carbon.”

Clean energy standard: Arguably the most consequential title is a clean energy standard, which would create a credit trading system for utilities to meet clean energy goals. Utilities would get at least partial credit if their carbon intensity is lower than 0.82 tons of carbon dioxide per megawatt-hour of power — including emissions calculated from producing and transporting the energy to the utility — through 2030 but that threshold would drop to 0.4 by 2035.

That approach would mean that natural gas power plants would not be able get partial credits without implementing carbon capture and sequestration technologies by the mid-2030s, although they would play a role in the energy transition during the 2020s. As structured, the standard also includes labor protections for the construction of new generating units.

New provisions: Overall, the legislation would authorize $565 billion in spending over ten years as the U.S. pursues deep decarbonization efforts. It includes a host of new provisions in areas like environmental justice, energy transition, waste reduction and transportation.

The bill would create a national green bank, seeded with $100 billion, to leverage public money for investments in new technologies needed to hit emissions reductions goals. The legislation also includes a requirement that 40 percent of funds go toward environmental justice communities that have suffered persistent pollution — a priority for the Biden administration.

The Democratic bill also would direct the Securities and Exchange Commission to require disclosure from public companies about their climate-related risks. And it seeks to aid communities affected by the transition to cleaner energy through a host of new programs, including one providing federal grants to communities suffering significant losses of revenue as fossil fuel production drops.

“We’re not leaving anyone behind here, we’re offering the vision for America’s future,” Tonko said. “Every person listening: You, your family and your community have an important role to play.”

It also sets a new, interim national goal of reducing emissions 50 percent below 2005 levels by no later than 2030.

In addition, the bill sets a ten-year deadline for the cleanup of Superfund sites vulnerable to the impact of climate change and would limit the issuance of permits in census tracts facing significant pollution problems.

Hot docs: Full text of the CLEAN Future Act is available on POLITICO Pro, as well as a section-by-section summary and a summary of major changes to this year’s legislation.

Source: https://www.politico.com/news/2021/03/03/house-energy-commerce-climate-legislation-473351
Droolin’ Dog sniffed out this story and shared it with you.
The Article Was Written/Published By: Anthony Adragna