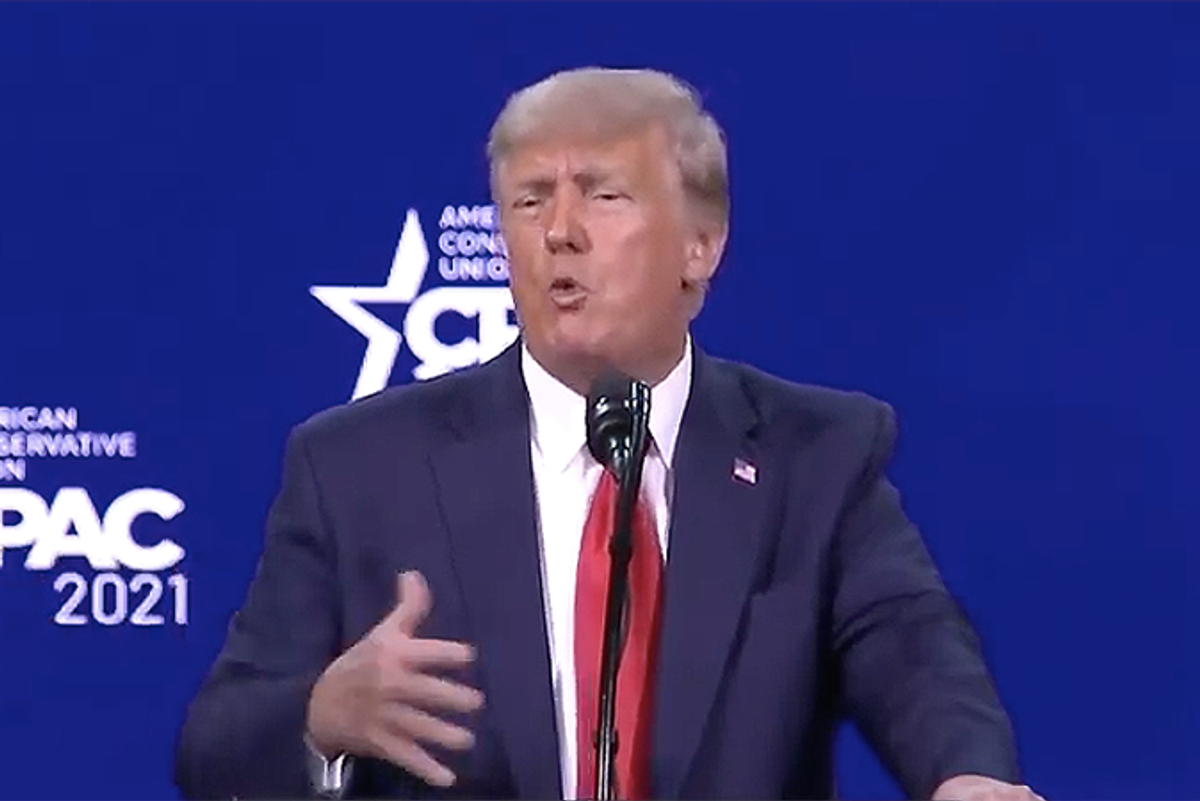 President Donald Trump’s speech to CPAC surprised audiences as he called for an end to “cancel culture” and then listed off GOP Senators and House members that he wanted to cancel.

Trump also demanded that there be restrictions on voting so that fewer Americans are able to access the polls, which would give Republicans a better shot at winning.

At the start of his speech, Trump also appeared to accidentally congratulate current President Joe Biden for his record-setting stock market numbers. He also suggested that he withheld foreign aid to countries by lying to them about needs they must meet first. Then once those demands were met, Trump said he still refused to release the money.

It was a speech that lasted well over an hour and served as a reminder of what Americans are missing without Trump on television each day.

Trump was mocked for a few moments of short-circuiting:

But the most shocking moments came when Trump perpetuated his conspiracy theories and, as Tom Nichols said, laid the foundation for further violence.

Trump is laying down the framework for more violence here.

See other tweets about the speech below:

The inspirational high point of the speech was when he spat out the names of Liz Cheney, Mitt Romney and other Repu… https://t.co/Uz1gBvp6bF

Trump, without a shred of irony, claims Biden is the most corrupt president in history (Trump owned and profited fr… https://t.co/ZJBW2aX2zs

I think the takeaway here is not just the direct ask but more the idea that other groups asking should * not * get… https://t.co/Sc53pcRV1W

Trump on Dems: “It’s a con job. They’re conning everyone.”

This is called projection.

Even Space Force preferred to burn up in the atmosphere rather than listen to Trump’s speech
https://t.co/hmZcQt8yaj #meteor

As I told you, the Republicans have become the late 70s Soviet communist party, and this long and boring ramble abo… https://t.co/kELkLi63gu

Well, that was a boring start but it ended with a full-on dumpster of hot crazy that every Republican is going to h… https://t.co/KhEEtnwmVu

And this here is why we begged Tom so much to tweet this out https://t.co/Ecaivx9R1w

Just an observation, but I haven’t heard the word “democracy” once during this entire pathetic propaganda rant.

Trump, who opposes cancel culture, now reading off a list of Republican traitors.

There it is: a long Trump rant rehashing the Big Lie

No the Const. does not require state legislatures to make eve… https://t.co/eLjSOk40vG

political conference organized entirely around culture wars, and that has staked out a very particular stance in th… https://t.co/LOaAXpeDP8

Now he saying that people can’t get good lawyers because they’re all going to represent people at the border. LOL.… https://t.co/MJVooUwPgS

Joe Biden, who is apparently just a figurehead and totally weak and incompetent, is also Thanos and is controlling… https://t.co/K1eLpB0kWE

Trump now saying he will continue his “struggle.” Who else promised to do that after a failed putsch?

At some point, Trump will grasp that his real problem wasn’t early or mailed voting, but just voting generally…… https://t.co/AUmapVqHoG

How did you do? 🧐 https://t.co/azMilQogmx

It is the time for the Naming of the Enemies.

Trump lists all the Republicans who voted to impeach/convict him for… https://t.co/l2P5mUbPnt

And again Trump says, “we won the election twice.”

This unrepentant, lying incitement will feature prominently in… https://t.co/W7rAsfTIJp

@ScottWalker @CPAC Well, that’s a review. It was an effective presentation of lies, paranoia and fascism to an (unf… https://t.co/AIOpFGmVCh

Trump: “I am not starting a new party.”

“They used COVID as a way of cheating.”

This is so embarrassing for CPAC and the GOP.

“It all leads to communism.”

He lost PA despite getting 100% of the dead relative vote https://t.co/UNV9hiG1vk

Source: https://www.rawstory.com/trump-cpac-speech-incites-violence/
Droolin’ Dog sniffed out this story and shared it with you.
The Article Was Written/Published By: Sarah K. Burris