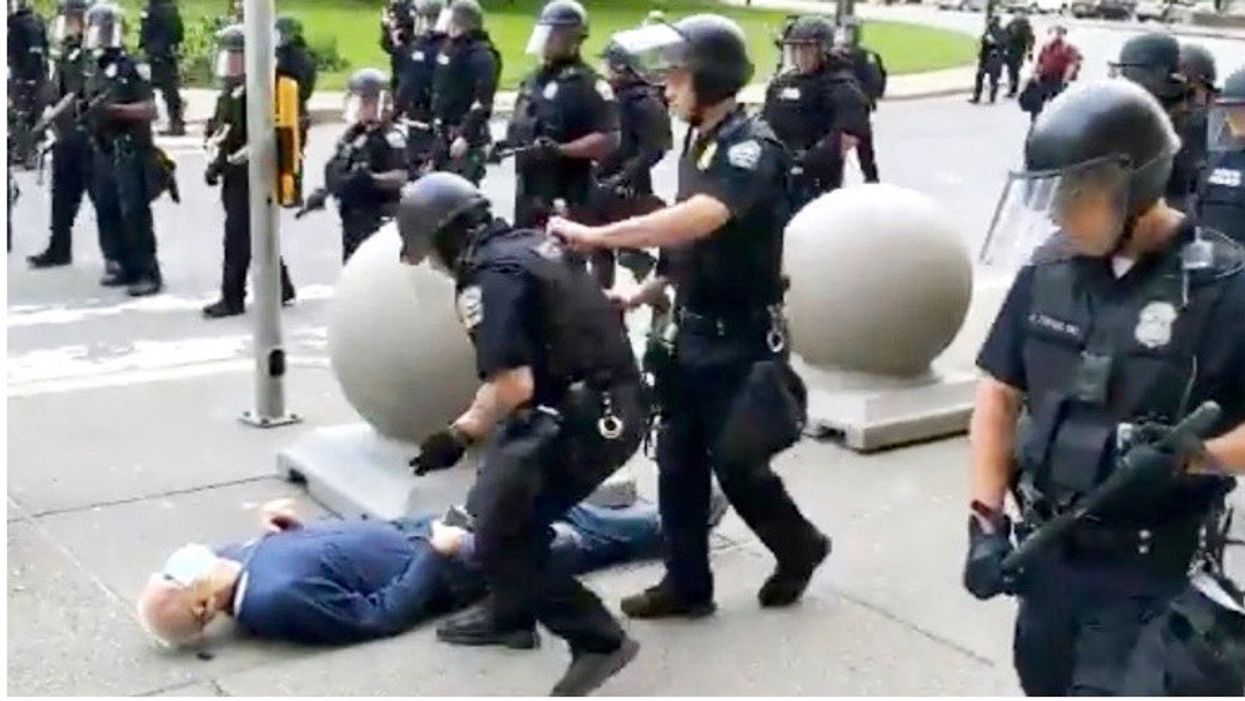 The 75-year-old Buffalo man pushed over by police and left in a pool blood during racial-justice protests last summer has filed a lawsuit against the city and the officers involved.

Martin Gugino, a longtime social-justice activist, received national attention when his skull was fractured during a June 4 protest in Buffalo’s Niagara Square. Gugino’s injury was documented by this graphic video.

At the time, Donald Trump had amplified the story by falsely suggesting in a tweet that Gugino might have been an Antifa provacateur. Trump also wondered whether Gugino fell intentionally to cause an outcry over police brutality, or perhaps was trying to damage police equipment.

On February 11, a grand jury dismissed a case against officers Robert McCabe and Aaron Torgalski, who had been charged with felony second-degree assault for shoving Gugino to the ground during the protest. But that was hardly the end of the story.

According to TV station 10WBNS in Buffalo, “the lawsuit claims that the city enacted an “unconstitutional and draconian” week-long curfew, one “selectively enforced against peaceful protesters” like Gugino. Moreover, the defendants used “unlawful and unnecessary force” against the seventy-five-year-old Gugino in an effort to “suppress the exercise of his constitutional rights”.

“Let us not forget Sen. Ben Sasse (R-Neb.) recent words” said Melissa Wischerath, co-counsel for Gugino, “that the five freedoms enshrined in the first amendment – speech, religion, press, assembly, and protest – are clustered together because they are interconnecting. You do not have freedom of speech unless you have freedom of protest. By assaulting Martin Gugino as he peacefully protested in Niagara Square, the City and BPD attacked Martin Gugino’s most fundamental rights as an American. If any one person’s rights are suppressed by the state, it harms all of us by eroding the foundation of our constitution.”

Last October, Gugino, who spent weeks hospitalized with his head injuries, had called out Buffalo Mayor Byron Brown for having imposed the curfew. And Gugino had said “these were not two especially bad officers, the whole system is wrong. They’re all taught to do the wrong thing. That’s the problem that needs to be fixed.”

You can read the lawsuit at the WBNS website.

Source: https://www.rawstory.com/buffalo-protest/
Droolin’ Dog sniffed out this story and shared it with you.
The Article Was Written/Published By: Ray Hartmann