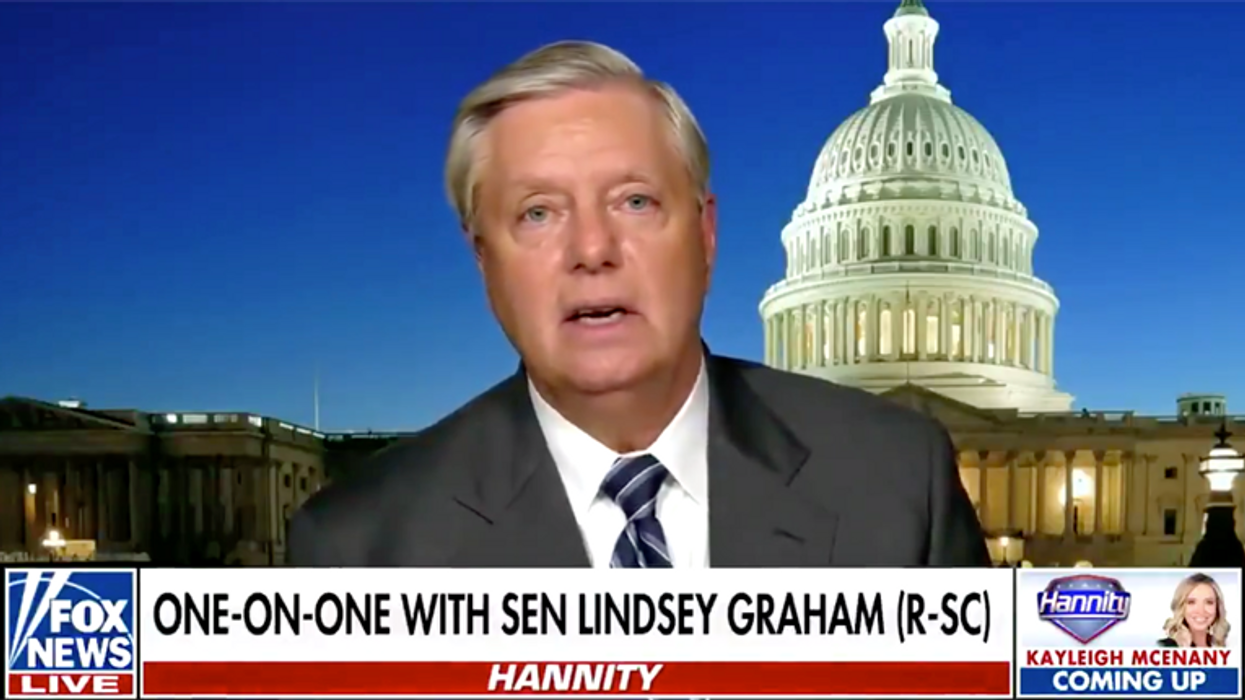 The web is characterizing it as a hostage crisis in Washington, D.C. as Sen. Lindsey Graham (R-SC) threatened that if impeachment doesn’t end then the violence will continue.

The South Carolina official told Fox News Wednesday that if Democrats really want “unity” then they’ll have to end the strive for actually enforcing “law and order.” After an armed insurrection at the U.S. Capitol, officials are finally holding President Donald Trump accountable for encouraging his supporters “to fight.”

“You don’t concede when there’s theft involved. Our country has had enough. We will not take it anymore,” Trump told the crowd before the attack. “If you don’t fight like hell you’re not going to have a country anymore.”

“We’re going to walk down to the Capitol and we’re going to cheer on our brave senators and congressmen and women, and we’re probably not going to be cheering so much for some of them,” he called on the audience.

Graham is now saying that unity is only possible if Democrats capitulate to Trump and his followers. The demands of those Trump followers appear to be hanging Vice President Mike Pence and handing the 2020 election to Trump.

Americans were furious at Graham and unleashed. See the tweets below:

If owning slaves is an impeachable offense, Trump should be impeached a third time. For God knows what reason, Lind… https://t.co/oyekrpD2Ly

Lindsey Graham: “If you want to end the violence, end impeachment.”

Me: Take your cheap threats and go fuck yourse… https://t.co/0LyUMtT6xv

For whatever the Russians have on @LindseyGrahamSC reveal it Lord. https://t.co/fUQu6UsdLy

Lindsey Graham said tonight, “if you want to end the violence, end impeachment.”

We don’t negotiate with terrorist… https://t.co/M7j97Wu5He

Reminds me of what President @BarackObama had to say about Lindsey Graham in his recent memoir:

Lindsey Graham is and always was a charlatan.

you can’t have Lindsey Graham on Judiciary until his call to Georgia is fully investigated. No one who voted object… https://t.co/gAN8YH1MBX

A week after being berated in public at an airport, Lindsey Graham is on Hannity arguing against impeachment

Never, in the history of American politics, has it been more obvious that a person has been Kompromated, than it is… https://t.co/ilS6D1wSFw

.@LindseyGrahamSC is such an embarrassment. We really need to up the quality of United States Senators. SMDH… https://t.co/UT68JL6OXC

The thing is, Lindsey Graham has always been terrible.

He suckered a lot of reporters into thinking he had princi… https://t.co/9BYCJJ7C20

Agreed @LindseyGrahamSC the issue here is inserrection. Stop the hyperbole and deflection. https://t.co/wZGh0N9C1S

@LindseyGrahamSC @seanhannity Are you guys going to talk about how trump incited a riot that ended with this police… https://t.co/PmqQIDoBMi

Hey @LindseyGrahamSC — Trump wasn’t impeached for being a racist. He was that from day one.

He was impeached for I… https://t.co/z7qFMtofKu

Source: https://www.rawstory.com/lindsey-graham-hostage-crisis/
Droolin’ Dog sniffed out this story and shared it with you.
The Article Was Written/Published By: Sarah K. Burris