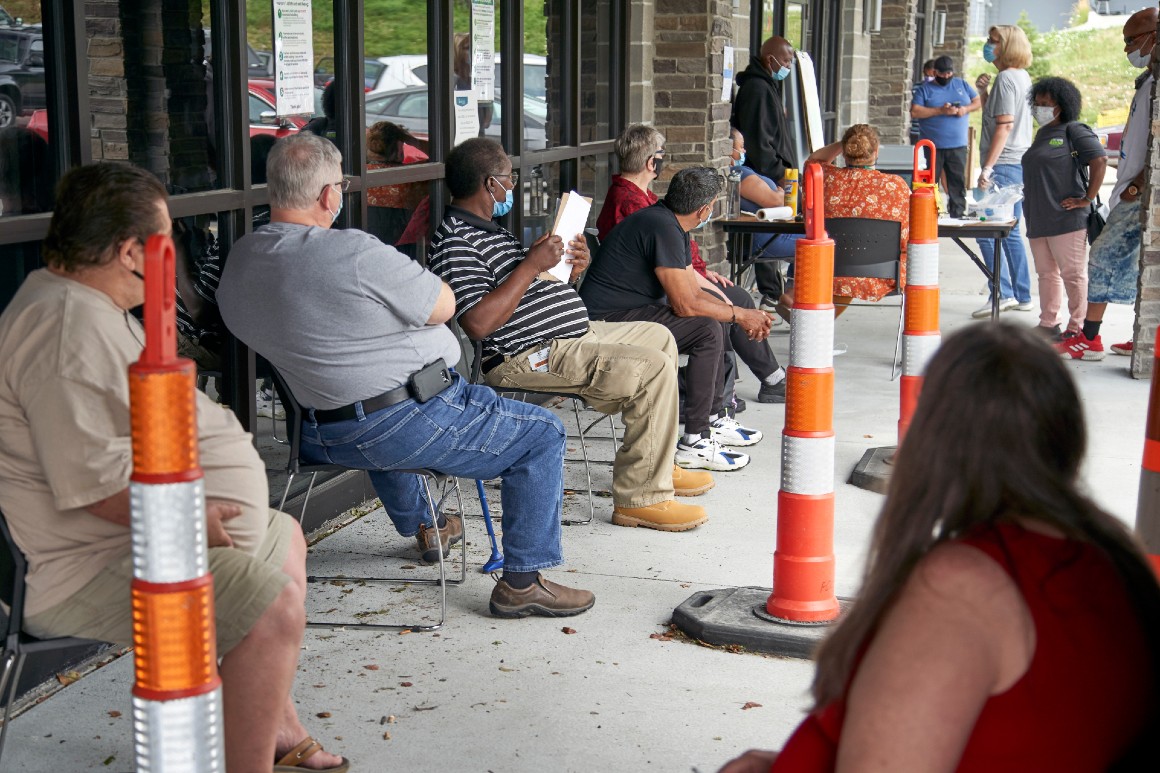 New unemployment claims fell last week to 963,000, the Labor Department reported Thursday, the first time in months the figure has been less than 1 million.

An additional 488,622 laid-off workers filed for jobless aid under the new pandemic unemployment assistance program, created for those not traditionally eligible for unemployment benefits like the self-employed and gig workers.

Though the numbers are gradually falling, the report indicates workers are still being pushed out of their jobs at historic levels during the coronavirus pandemic.

New applications filed in state programs are still far above the previous record of 695,000 in 1982, fueling concerns that the economic recovery may not be fully under way.

In total, more than 25 million people are currently receiving jobless benefits, according to DOL.

Why it matters: Another week of elevated unemployment claims is likely to add more pressure on lawmakers to reach a deal on another coronavirus aid package. Despite nearly three weeks of negotiations, party leaders are no closer to a deal, and it’s likely the stalemate will drag into September.

A major sticking point in the talks is how much extra aid Congress should give to laid-off workers. President Donald Trump signed a bill in March that included an extra $600 per week in unemployment benefits, but that payment expired on July 31.

Democrats want to extend the extra jobless aid into 2021. But Republicans don’t want the benefit to continue at $600, arguing that it paid some workers more to be unemployed than they earned at their jobs and would encourage people not to return to work.

To prod negotiations along, Trump over the weekend signed an executive action that would offer jobless workers an extra $400 a week. But, the move would require states to opt in, implement a new system, and fund one-fourth of the aid. Governors of some states have complained that Trump’s plan would be too expensive or logistically impossible.

Source: https://www.politico.com/news/2020/08/13/unemployment-claims-below-1-million-394642
Droolin’ Dog sniffed out this story and shared it with you.
The Article Was Written/Published By: Rebecca Rainey

Aimee Mann covered Leonard Cohen’s “Avalanche” for the theme music of HBO’s I’ll Be Gone In The Dark. The show is documentary about Michelle McNamara, the true-crime author (and Patton Oswalt’s wife) whose posthumous book of the same name detailed her investigation into the Golden State Killer. McNamara died in 2016 of an accidental overdose... [...]

These are the albums we’re turning to for comfort and connection right now. Read full story on the Bandcamp Daily. Source: https://daily.bandcamp.com/seven-essential-releases/essential-releases-september-18-2020 Indie Brew found this story and shared it with you. The Article Was Written/Published By: Bandcamp Daily Staffv [...]

With the state of the world, there’s never been a better time to blast to “Bridge Over Troubled Water” for a moment of peace. Thankfully, Muse’s Matt Bellamy has us covered. On Friday, the British singer-songwriter dropped his rendition of the 1970 Simon and Garfunkel cut, complete with some delicate acoustic strumming and his stellar... [...]

The Japanese trumpeter’s dense and cosmic sixth album blends jazz with Afrobeat, hip-hop, neo-soul, and funk. Source: https://pitchfork.com/reviews/albums/takuya-kuroda-fly-moon-die-soon/ Indie Brew found this story and shared it with you. The Article Was Written/Published By: Dean Van Nguyenv [...]

We’ve Got A File On You: Alicia Keys

We’ve Got A File On You features interviews in which artists share the stories behind the extracurricular activities that dot their careers: acting gigs, guest appearances, random internet ephemera, etc. More » Source: https://www.stereogum.com/2098364/alicia-keys-interview-prince-grammys-beyonce-bon-iver/franchises/interview/weve-got-a-file-on-you/ Indie Brew found this story and shared it with you. The Article Was Written/Published By: Stereogumv [...]

Piece is set to become one of the street artist’s most expensive works Source: https://www.independent.co.uk/arts-entertainment/art/news/banksy-auction-show-me-monet-painting-sale-sothebys-b483865.html Indie Brew found this story and shared it with you. The Article Was Written/Published By: Louis Chiltonv [...]

The Top 10: Strangest subjects for songs

None of your unrequited love nonsense here Source: https://www.independent.co.uk/voices/top-10-strangest-subjects-songs-b480953.html Indie Brew found this story and shared it with you. The Article Was Written/Published By: John Rentoulv [...]

He says authorities are “making up crooked facts” to “enslave” the population. Continue reading… Source: https://ultimateclassicrock.com/van-morrison-lockdown-protest-songs/ Indie Brew found this story and shared it with you. The Article Was Written/Published By: Martin Kieltyv [...]

Impact Creative Systems (formerly Imagine Impact) is bringing a startup accelerator-style approach to finding fresh creative talent, and it announced this morning that, with funding from venture capital firm Benchmark, it’s spinning out from Imagine Entertainment — the production company founded by director Ron Howard and producer Brian Grazer. Right after the news broke, the accelerator’s... [...]

Sunflower Bean – “Moment In The Sun”

New York trio Sunflower Bean released their last album, Twentytwo In Blue, back in 2018. Last year, they released the King Of The Dudes EP. And now, they’re sharing a new one-off single, “Moment In The Sun.” The song was actually written over two years ago, but the band considered it a sonic … More... [...]