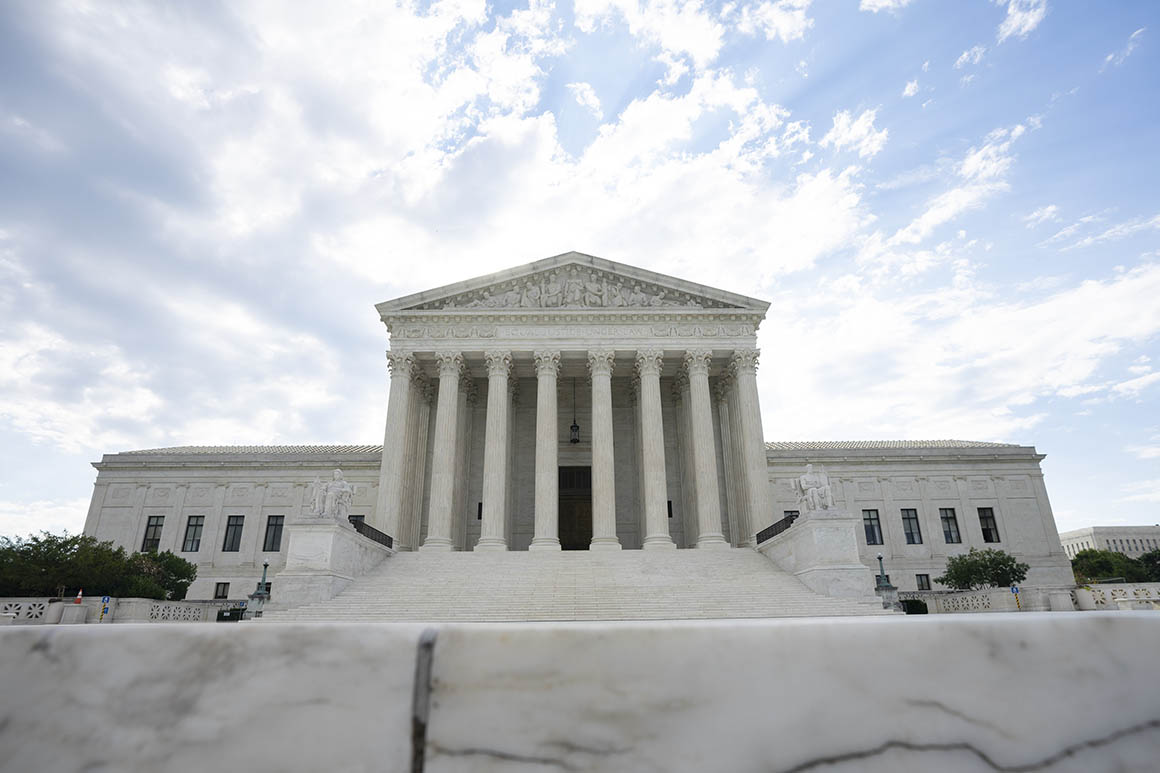 The Supreme Court has rebuffed an effort by Republicans to block Rhode Island officials’ agreement to waive mail-in ballot security measures due to the coronavirus pandemic.

The high court on Thursday turned down an emergency application from the Republican National Committee and the Rhode Island state GOP seeking to preserve a requirement in state law that absentee ballot envelopes bear the signature of two witnesses or be certified by a notary public.

No vote tally was released, but the fact that the court turned down the application meant that either Chief Justice John Roberts or Justice Brett Kavanaugh — or both of those GOP-appointed justices — joined most or all of the Democratic appointees in rejecting the Republican-led drive to insist on enforcement of the two-witness-or-notary rule.

The Supreme Court’s action was notable because, since the pandemic began, the justices have sided with Republicans in other cases seeking to limit or block coronavirus-related changes to voting procedures.

In April, the justices split 5-4 along ideological lines as they blocked a lower court order allowing Wisconsin voters’ absentee ballots to be counted if they were mailed and postmarked up to six days after an election that was about to take place there.

And last month, the justices divided in the same fashion as they put on ice a judge’s order waiving ballot witness requirements in Alabama similar to the ones at issue in the Rhode Island case.

Some liberal critics said those decisions seemed to signal a hostility at the high court to measures aimed at making sure Americans have practical opportunities to vote despite the dangers posed by in-person voting and the challenges involved in meeting traditional absentee ballot requirements in some states while complying with social distancing measures.

However, the ruling Thursday suggested a majority of the Supreme Court may defer to state officials regarding changes, even if they depart from state law. The Rhode Island requirements were waived via a consent decree in litigation voting-rights groups brought to nullify the ballot-witness rules during the pandemic. The state agreed to waive the rules during its presidential primary election in June.

The court also took the unusual step Thursday of briefly explaining why it turned down the stay sought by the Republican Party organizations.

“Here the state election officials support the challenged decree, and no state official has expressed opposition. Under these circumstances, the applicants lack a cognizable interest in the State’s ability to ‘enforce its duly enacted’ laws,” the unsigned order from the high court said. “The status quo is one in which the challenged requirement has not been in effect, given the rules used in Rhode Island’s last election, and many Rhode Island voters may well hold that belief.”

Ohio State University law professor Ned Foley said the decision sends a signal that the justices are trying to adhere to a principle the court set out in a 2006 Arizona case, Purcell v. Gonzalez. There, the court said that last-minute, court-ordered changes to election procedures are strongly disfavored.

“In terms of this year and Covid, this is a new and important development and helps explain the totality of the court’s position in all of these cases,” Foley said. “The court also explains that a key fact is the state government’s own view of the matter, since the Purcell principle is designed to protect the administration of elections from destabilizing judicially caused changes too close to the casting of ballots. I think the court offered its brief explanation in this case in order to highlight that important factor.”

Earlier this week, the justices halted a direct initiative in Oregon that would change how the state redraws its political lines every 10 years. The ruling suggested that a majority of the justices believe that a lower court judge erred in lowering the signature threshold and extending the filing deadline to get the measure on the November ballot. The move to ask the high court to preserve the traditional requirements was made by Oregon’s Democratic state attorney general, Ellen Rosenblum.

Many of the voting rights advocates who pressed Rhode Island to drop the requirement hailed the Supreme Court’s latest ruling.

“The court’s decision today affirms our assertion that voters should never have to choose between their health and their right to vote,” said Jane Koster, president of the League of Women Voters of Rhode Island. “Democracy was upheld by today’s decision.”

An RNC spokesperson said the court’s ruling “ignores election laws that have been on the books for decades.”

“It’s telling that a week after the governor and state legislature declined to waive the witness signature verification, this lawsuit was filed and the liberal secretary of state rolled over immediately,” said RNC press secretary Mandi Merritt. “Today’s ruling effectively allows for collusive litigation between state officials and liberal advocacy groups, and we strongly disagree.”

Source: https://www.politico.com/news/2020/08/13/supreme-court-rhode-island-ballot-rules-394876
Droolin’ Dog sniffed out this story and shared it with you.
The Article Was Written/Published By: Josh Gerstein

Aimee Mann covered Leonard Cohen’s “Avalanche” for the theme music of HBO’s I’ll Be Gone In The Dark. The show is documentary about Michelle McNamara, the true-crime author (and Patton Oswalt’s wife) whose posthumous book of the same name detailed her investigation into the Golden State Killer. McNamara died in 2016 of an accidental overdose... [...]

These are the albums we’re turning to for comfort and connection right now. Read full story on the Bandcamp Daily. Source: https://daily.bandcamp.com/seven-essential-releases/essential-releases-september-18-2020 Indie Brew found this story and shared it with you. The Article Was Written/Published By: Bandcamp Daily Staffv [...]

With the state of the world, there’s never been a better time to blast to “Bridge Over Troubled Water” for a moment of peace. Thankfully, Muse’s Matt Bellamy has us covered. On Friday, the British singer-songwriter dropped his rendition of the 1970 Simon and Garfunkel cut, complete with some delicate acoustic strumming and his stellar... [...]

The Japanese trumpeter’s dense and cosmic sixth album blends jazz with Afrobeat, hip-hop, neo-soul, and funk. Source: https://pitchfork.com/reviews/albums/takuya-kuroda-fly-moon-die-soon/ Indie Brew found this story and shared it with you. The Article Was Written/Published By: Dean Van Nguyenv [...]

We’ve Got A File On You: Alicia Keys

We’ve Got A File On You features interviews in which artists share the stories behind the extracurricular activities that dot their careers: acting gigs, guest appearances, random internet ephemera, etc. More » Source: https://www.stereogum.com/2098364/alicia-keys-interview-prince-grammys-beyonce-bon-iver/franchises/interview/weve-got-a-file-on-you/ Indie Brew found this story and shared it with you. The Article Was Written/Published By: Stereogumv [...]

Piece is set to become one of the street artist’s most expensive works Source: https://www.independent.co.uk/arts-entertainment/art/news/banksy-auction-show-me-monet-painting-sale-sothebys-b483865.html Indie Brew found this story and shared it with you. The Article Was Written/Published By: Louis Chiltonv [...]

The Top 10: Strangest subjects for songs

None of your unrequited love nonsense here Source: https://www.independent.co.uk/voices/top-10-strangest-subjects-songs-b480953.html Indie Brew found this story and shared it with you. The Article Was Written/Published By: John Rentoulv [...]

He says authorities are “making up crooked facts” to “enslave” the population. Continue reading… Source: https://ultimateclassicrock.com/van-morrison-lockdown-protest-songs/ Indie Brew found this story and shared it with you. The Article Was Written/Published By: Martin Kieltyv [...]

Impact Creative Systems (formerly Imagine Impact) is bringing a startup accelerator-style approach to finding fresh creative talent, and it announced this morning that, with funding from venture capital firm Benchmark, it’s spinning out from Imagine Entertainment — the production company founded by director Ron Howard and producer Brian Grazer. Right after the news broke, the accelerator’s... [...]

Sunflower Bean – “Moment In The Sun”

New York trio Sunflower Bean released their last album, Twentytwo In Blue, back in 2018. Last year, they released the King Of The Dudes EP. And now, they’re sharing a new one-off single, “Moment In The Sun.” The song was actually written over two years ago, but the band considered it a sonic … More... [...]