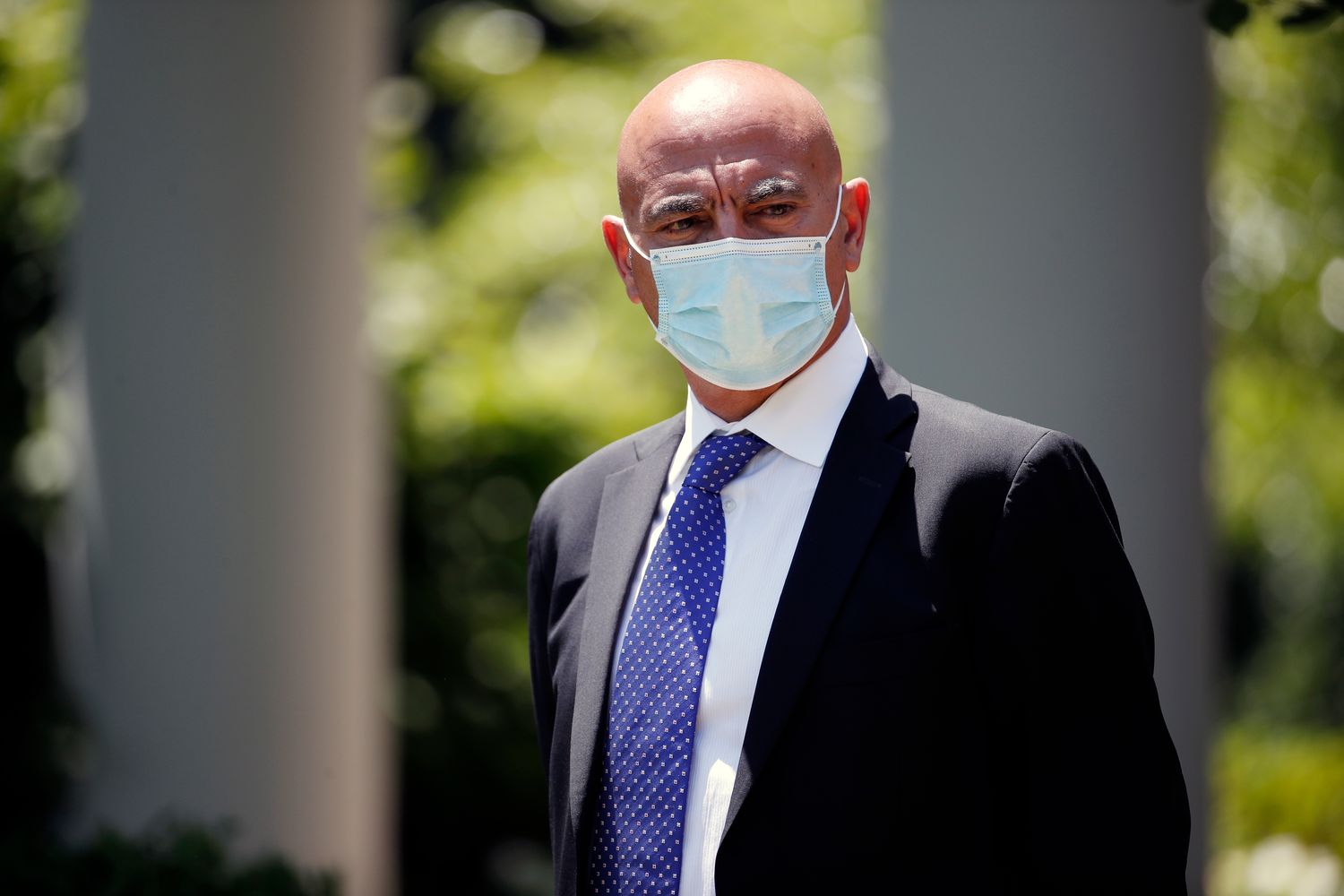 The Trump administration is hiring consultants with drug industry ties to steer its effort to find a coronavirus vaccine under a contract that allows them to avoid disclosing potential conflicts of interest.

The arrangement, which is covered through a $611,500 contract for “Operation Warp Speed,” raises more questions about the transparency of the pandemic response and the roles of outside contractors, including top coronavirus vaccine adviser Moncef Slaoui, who are helping steer the government’s $10 billion development program.

The contract is covering the housing expenses of Slaoui, a longtime pharmaceutical executive who joined the administration’s effort on May 15 as the top clinical adviser and pledged to take a $1 salary.

It’s also paying for several other consultants whose roles have not been previously reported, including Carlo de Notaristefani, a pharmaceutical industry veteran who the Department of Health and Human Services said is overseeing all of the program’s manufacturing. As consultants, instead of political appointees, Slaoui and de Notaristefani can sidestep the ethics disclosures required of federal workers.

The contract also covers William Erhardt and Rachel Harrigan, who are both former Pfizer executives. HHS declined to specify their tasks when asked about their roles; Harrigan is listed as a clinical adviser in the HHS directory.

Slaoui’s consulting arrangement with the Trump administration has drawn scrutiny because of the way it allows him to continue to invest in pharmaceutical companies even as he helps shape the government’s sprawling vaccine effort. Critics say the new details about the additional consultants and Slaoui’s personal expenses raise further questions about the department’s arrangement.

“For a drug company executive with clear conflicts of interest who is already skirting government ethics rules to be given ‘free’ housing by a private contractor who was awarded a vague $600,000 government contract smacks of the kind of corruption that is unacceptable in any government program,” said Eli Zupnick of Patients Over Pharma, a campaign run by progressive group Accountable.US. “Examples like these are exactly why [Operation Warp Speed] needs to be brought out of the shadows,” Zupnick added.

HHS officials said that Slaoui had agreed to be reimbursed for housing and hotel expenses that amount to about $17,000 between May and Aug. 22, 2020, and that the contract — which was awarded to a firm called Advanced Decision Vectors and could top $684,000 — was the maximum the government could pay and, but not necessarily what it would pay out. Slaoui lived in the Philadelphia area before joining Operation Warp Speed.

“Any funds not used to reimburse Dr. Slaoui for housing or hotel expenses will be returned to the U.S. Government,” said a senior official. HHS said it could not share details about de Notaristefani’s salary because it was proprietary information.

Details about the contract were publicly posted to USASpending.gov, with a start date of May 15, the same day that Trump announced Slaoui’s selection in the Rose Garden. “Consultant will provide expert advice regarding development and mass production of new Covid-19 vaccine candidates, therapeutics and diagnostics, as well as advising HHS regarding coordination among ASPR, NIH and FDA, the aforementioned act,” the contract’s description reads.

The New York Times first reported that Slaoui’s personal expenses were being covered by a contractor.

HHS said that Slaoui “had zero involvement” in hiring of other consultants brought in through the contract and that de Notaristefani’s role in Operation Warp Speed predated Slaoui’s involvement.

Democrats have raised persistent questions about why the Trump administration brought in Slaoui as a contractor and not as a special government employee, which would open him up to additional disclosures and ethics requirements.

“It appears that the administration came up with an unusual arrangement for Dr. Slaoui in a blatant attempt to skirt federal ethics law,” Sens. Elizabeth Warren (D-Mass.) and Richard Blumenthal (D-Conn.) and Rep. Pramila Jayapal (D-Wash.) wrote to HHS last month.

For instance, Slaoui held more than 155,000 shares in Moderna, which announced positive news about a potential coronavirus vaccine three days after Slaoui was named to the top adviser post. The news inflated the value of Slaoui’s Moderna shares by about $2.4 million, although an HHS spokesperson said that Slaoui was immediately divesting and donating the $2.4 million in gains to charity.

Slaoui, a longtime GlaxoSmithKline executive, still holds an unknown amount of stock in the pharmaceutical company, which is collaborating on the development of several potential vaccines and was awarded up to $2.1 billion on Friday, to be shared with its partner Sanofi, in Operation Warp Speed’s largest deal to date.

Public Citizen and Lower Drug Prices Now had argued to the HHS inspector general that Slaoui, who is serving as a private contractor, should be viewed as a political appointee, which would open him up to new disclosures and protections against conflict of interest. But the inspector general this month dismissed the complaint, telling the groups in a follow-up letter on Friday that it lacked the authority to change Slaoui’s job classification.

Slaoui’s arrangement also has stirred questions about whether it’s appropriate for a contractor to be taking such a significant role in the federal government’s vaccine moonshot. Slaoui has maintained that as a consultant, he is only offering advice and not making decisions.

“I find that unbelievable,” said Craig Holman of Public Citizen, who helped bring the recent claim against Slaoui and said he would file a second complaint, with the Office of Personnel Management, next week. “He is a co-director of Operation Warp Speed. He is in one of the most powerful positions of the current federal government. The notion that he can’t direct anybody to do anything is unbelievable.”

Source: https://www.politico.com/news/2020/07/31/vaccine-project-contract-raises-transparency-questions-389822
Droolin’ Dog sniffed out this story and shared it with you.
The Article Was Written/Published By: Dan Diamond