Comments from Alexandria Ocasio-Cortez on her theory about crime spiking in New York City have gone viral and are being slammed relentlessly, as the congresswoman believes it all boils down to people being broke and hungry.

Asked about the increase in crime in her city during a recent virtual town hall, Ocasio-Cortez connected the stats to a bad economy putting people in desperate situations.

“Do we think this has to do with the fact that there’s record unemployment in the United States right now? The fact that people are at a level of economic desperation that we have not seen since the Great Recession?” the Democratic congresswoman said.

“Maybe this has to do with the fact that people aren’t paying their rent and are scared to pay their rent,” she continued, “and so they go out, and they need to feed their child and they don’t have money so… they feel like they either need to shoplift some bread or go hungry.” 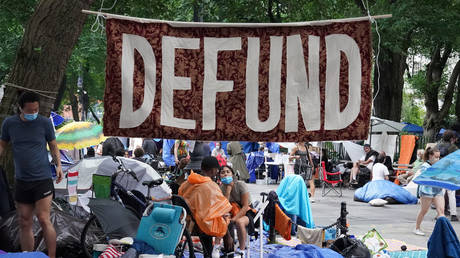 Crime has been on the rise in New York since the May 25 death of George Floyd in Minneapolis triggered a nationwide anti-police-brutality protests and calls to ‘defund police’, though much of it is far more violent than shoplifting.

There have been 43 shootings in the city over the last week, compared to only 13 during the same period last year. On the Fourth of July weekend, there were 10 shootings and one person murdered in just a nine-hour span. June saw a similar uptick in shootings over last year.

Ocasio-Cortez’s ‘theory’ about this crime wave has earned her plenty of criticism from conservatives, most of whom are also critical of her support for the Defund the Police movement.

.@AOC is dishonest & crimesplaining. Bail reform, a disbanded anti-crime unit, no courts & total undermining of cops by political opportunists has unleashed guns & criminals onto society. The same NYPD that kept crime down for 20 yrs has been defunded & demoralized. Facts matter. https://t.co/gXFircFIJo

“Maybe increased crime has to do with the air speed velocity of an unladen swallow,” tweeted podcaster and author Ben Shapiro in reaction to the congresswoman.

Others accused Ocasio-Cortez of “crimesplaining” and ignoring facts.

What’s sad is that she always talked about how hard her parents worked so she could have a good life.

She knows better than many what decent people do during hard times.

During the same town hall where she discussed crime, the congresswoman also criticized Mayor Bill De Blasio’s recently announced plan to cut $1 billion in funding to the New York Police Department, which she says “aren’t really real” cuts at all.

“The New York City Police Department has not been defunded, even with these budgetary changes that were proposed in the city council. A – They’re not fully enacted. B – They aren’t a real $1 billion in cuts. C – These cuts aren’t really real. And again, they haven’t even happened yet,” she said.

Asked what a world where the police are defunded looks like, the congresswoman simply responded: “It looks like a suburb.”

Congresswoman @AOC: “When people ask me ‘What does a world where we defund the police look like?’, I tell them it looks like a suburb.”

Translation: She lies to them.

Source: https://www.rt.com/usa/494554-aoc-new-york-crime/?utm_source=rss&utm_medium=rss&utm_campaign=RSS
Droolin’ Dog sniffed out this story and shared it with you.
The Article Was Written/Published By: RT

Ricky Gervais calls out cancel culture: &apos;You shouldn&apos;t have to go to court for telling a joke&apos;

Gervais, known for his acerbic and often offensive style of humour, has railed against celebrity ca

Sorry about the outage folks…

UPDATE: 3:05PM EST It looks like we are BACK! Come back to The Stream! https://indiebrew.net/ We’re

Bush to publish book with his paintings of 43 immigrants