A student accused of attacking a policeman during a protest in Philadelphia has been cleared of wrongdoing, with footage of the incident belying the assault allegations and showing officers unleashing batons on demonstrators.

All charges were dropped against the 21-year-old student, Evan Gorski, on Wednesday after prosecutors viewed online videos of the encounter, according to Gorski’s attorney, R. Emmett Madden.

“The police were lying. We had a protest against police brutality, and then police brutalize my client and try to frame him for a crime he didn’t commit,” Madden said.

While the attorney said Gorski was accused of pushing an officer off his bike and breaking his hand, footage from Monday’s protest shows no such thing. Instead, Gorski – seen sporting an Eagles jersey and a ponytail – briefly tries to separate one officer from another protester, prompting police to rain down baton blows on the student, apparently striking him in the head and producing an audible thud. Gorski was then tackled, brought to the ground and arrested.

The man who captured the encounter on film, Matthew VanDyke, told local media that protesters had remained peaceful that day, but were confused about the officers’ orders to disperse, not knowing where they were supposed to go.

“They just started beating people,” said VanDyke, a former documentary filmmaker. “It was a bizarre escalation of force that came out of nowhere. The police just went nuts.” 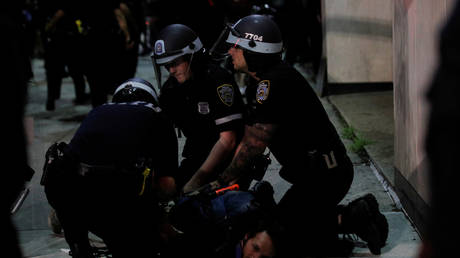 A spokesperson for the Philadelphia Police Department, Sekou Kinebrew, declined to comment on the arrest, but noted the department’s internal affairs division is investigating the incident, adding that “the propriety of the tactics employed will be included in that investigation.”

Source: https://www.rt.com/usa/490840-philadelphia-student-police-beating/?utm_source=rss&utm_medium=rss&utm_campaign=RSS
Droolin’ Dog sniffed out this story and shared it with you.
The Article Was Written/Published By: RT