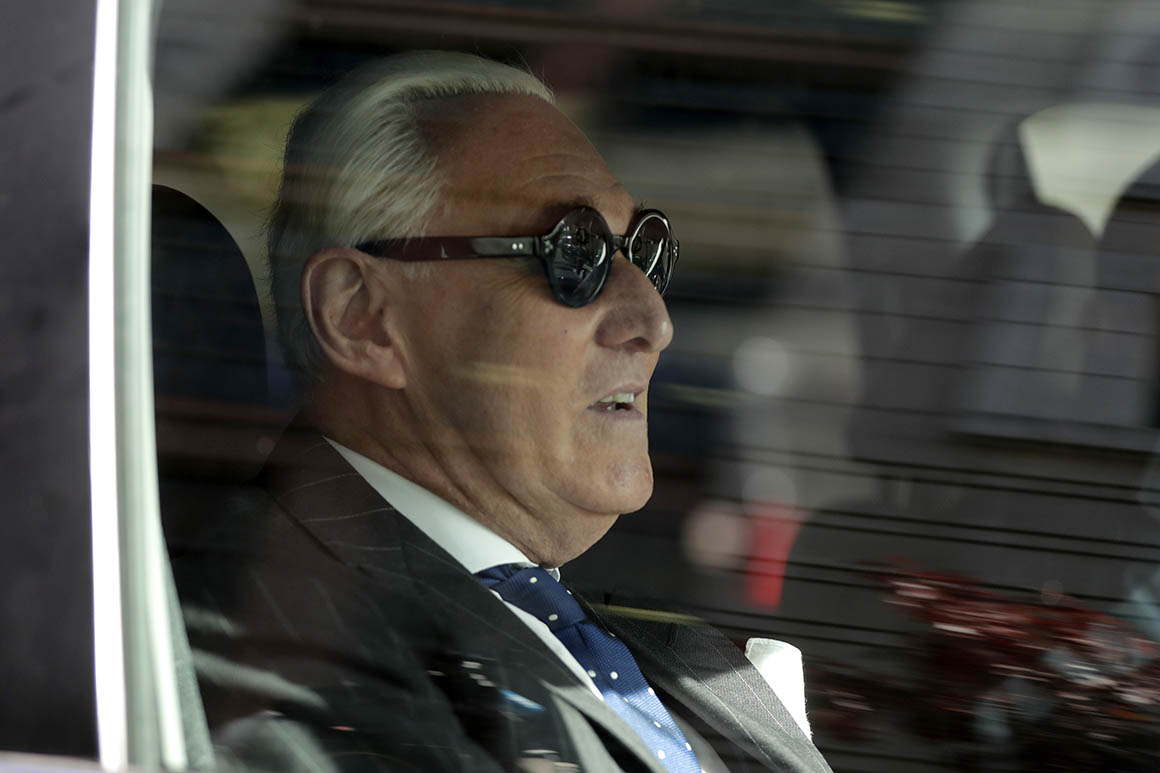 The pledge from the president came on Twitter, after Charlie Kirk, the founder of the conservative group Turning Point USA, wrote Tuesday that Stone “will serve more time in prison than 99% of these rioters destroying America” — referring to the ongoing nationwide protests over the killing of George Floyd, a 46-year-old black, by a Minneapolis police officer.

“This isn’t justice,” Kirk added. “RT for a full pardon of Roger Stone!”

Trump went on to share that tweet Thursday morning, writing in his own accompanying message: “No. Roger was a victim of a corrupt and illegal Witch Hunt, one which will go down as the greatest political crime in history. He can sleep well at night!”

The president’s social media post represents his latest intervention in Stone’s case and comes after Trump and Attorney General William Barr were widely rebuked by congressional Democrats and career Justice Department officials for intervening in the federal law enforcement matter just a few months ago.

Federal prosecutors had urged in February that Stone be sent to prison for roughly seven to nine years for impeding congressional and FBI investigations into connections between the Russian government and Trump’s 2016 campaign.

But after Trump blasted the prosecutors’ sentencing recommendation in a tweet as a “horrible and very unfair situation,” the Justice Department submitted a revised filing that offered no specific term for Stone’s sentence and stated that the prosecutors’ initial proposal “could be considered excessive and unwarranted.”

The four attorneys who shepherded Stone’s prosecution proceeded either to resign or notify the court that they were stepping off the case.

Last month, about 2,000 former Justice Department officials signed a letter urging Barr to resign over his actions in the federal cases of Stone and Michael Flynn, Trump’s former national security adviser who was also ensnared by Mueller’s probe.

Although Barr’s Justice Department has moved aggressively to quash the case against Flynn, it is unclear how the attorney general will respond to the president’s interference Thursday. Despite his efforts to lessen Stone’s sentence, Barr described the case in a February interview as a “righteous prosecution” and said, “I was happy that he was convicted.”

Other convicted associates of the president who were targets of the far-reaching investigation into Russian interference in the 2016 election, including former Trump attorney Michael Cohen and former Trump campaign chairman Paul Manafort, have been released from prison to home confinement due to concerns about the coronavirus.

Although Trump has so far stayed coy on the subject of a potential pardon for Stone or commutation of his sentence, the president strongly hinted in February that the self-proclaimed “dirty trickster” of GOP politics would not serve his full term behind bars, saying his former aide “has a very good chance of exoneration.”

Stone, for his part, conceded in April that he is “praying for a pardon,” and has been told by the Bureau of Prisons to report to begin serving his 40-month sentence by June 30. His appeal remains pending, and he has not yet made any attempt to have his sentence postponed until after his appeal is resolved.

Josh Gerstein contributed to this report.

Source: https://www.politico.com/news/2020/06/04/trump-promises-roger-stone-will-serve-no-prison-time-300351
Droolin’ Dog sniffed out this story and shared it with you.
The Article Was Written/Published By: Quint Forgey