A wild beast was filmed running through the center of a Siberian town, just a month after a man was nearly killed in a bear attack on the streets of another Russian city.

The bear was spotted racing down an empty narrow road in downtown Yeniseysk, a city of around 18,000 people in Siberia. A short video filmed by a driver shows the wild animal moving in front of the car before turning away from the road onto a lawn and fleeing somewhere near houses.

Local media reported that the bear was scared off by a patrol car and ran toward a police station, then decided to head in the opposite direction, and finally escaped into the woods. It is not clear how the animal wandered into the town but it has been suggested that it may have been driven out of the woods by logging, or simply wanted to explore new territories.

Bears occasionally stroll into cities and villages in Russia, mostly looking for food. Last month, a bear attacked a man on the streets of Yaroslavl, some 250km from Moscow. The animal was promptly scared off by a taxi driver, who honked and flashed headlights at the beast. Nonetheless, the victim of the attack was hospitalized with injuries. 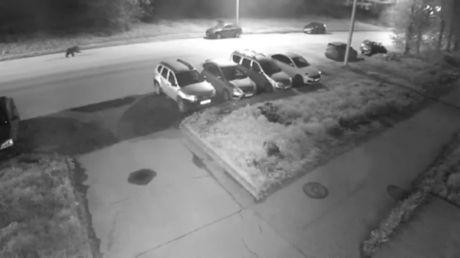 Source: https://www.rt.com/russia/490770-bear-russia-yeniseysk-siberia/?utm_source=rss&utm_medium=rss&utm_campaign=RSS
Droolin’ Dog sniffed out this story and shared it with you.
The Article Was Written/Published By: RT