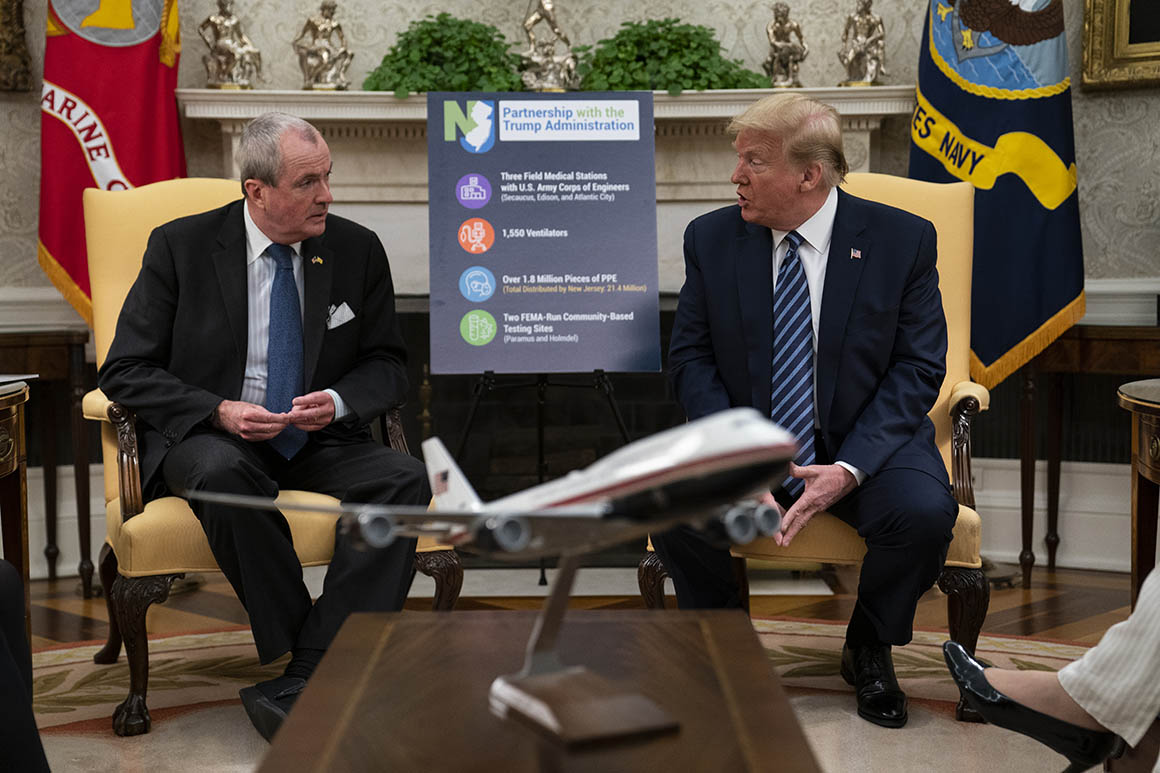 New Jersey’s public health crisis has produced what may be one of the strangest political romances the state has ever seen.

Gov. Phil Murphy, a Democrat who before the coronavirus held himself out as a sort of anti-Trump, has for the last two months praised the Trump administration’s response to the pandemic as he’s sought ventilators, equipment and billions in federal funds.

Trump has praised Murphy as well, including during gubernatorial visit last month to the White House. But on Friday, Trump took his praise of the governor to a new platform: A local radio program that bashes Murphy on a daily basis.

“He’s working very hard, I will say. He’s very liberal,” the president said. “And you’re not there and I’m not there, but he’s trying. He is trying very hard.”

NJ 101.5, which is heavy on opinion but includes straight news reporters as well, features hours of talk radio every day that’s highly critical of the governor. At least one of its other hosts also promotes anti-vaccination rhetoric and the station’s website touted a recently debunked coronavirus conspiracy theory.

Trump spent much of the call advocating for reopening businesses around the country. Murphy recently began easing restrictions put in place in mid-March, allowing “non-essential” businesses to open for curb-side pickup and re-opening beaches in time for Memorial Day weekend.

Spadea, a former Republican congressional and state Assembly candidate who frequently praises Trump and offers daily criticism of Murphy, during the conversation briefly accused Murphy of “taking advantage” of fear over the coronavirus, but did not challenge the president’s praise of the governor.

“I’m with you 100 percent,” Spadea told Trump shortly before the conversation ended.

Source: https://www.politico.com/states/new-jersey/story/2020/05/15/trump-calls-into-conservative-nj-radio-show-and-praises-democrat-murphy-1284190
Droolin’ Dog sniffed out this story and shared it with you.
The Article Was Written/Published By: Matt Friedman

As Covid Set In, Hudson Mohawke Headed for the Vaults

The California producer compiled a treasure trove of rarities into three EPs. Read full story on the Bandcamp Daily. Source: https://daily.bandcamp.com/features/hudson-mohawke-bandcamp-ep-interview Indie Brew found this story and shared it with you. The Article Was Written/Published By: Max Bellv [...]

Indie rock living legends Yo La Tengo have been mighty productive this year despite living on lockdown, or maybe because of it. Back in July they started dropping one formless improvisational track per day for a week, which turned out to be a new EP called We Have Amnesia Sometimes. A couple weeks … More... [...]

Two years ago, Tune-Yards were busy. In 2018, the wild, ecstatic indie rock duo came out with the album i can feel you creep into my private life, and they also scored the great Boots Riley film Sorry To Bother You. The duo hasn’t exactly been silent since then. Earlier this year, for … More... [...]

Lovecraft Country Expanded Its Mythos With a Carnal Story about War

The degree to which HBO’s Lovecraft Country has already branched off from the novel its based on might give you the sense that at this point, with half the season over, the story might slow down on the worldbuilding to begin fully weaving its core character’s arcs together in the buildup to its finale. But... [...]

In 2013, the spacey psychedelic English band Loop reunited and have been playing shows sporadically since then. In 2015, they released an EP called Array 1, which was supposed to be the first project in a series of of three that never materialized. But today the band has announced that they are about … More... [...]

We need to consider the possibility that Fall Out Boy got into show business as a pathway to someday appearing on all of their favorite game shows. Earlier this year Pete Wentz and Patrick Stump came on down to be contestants on The Price Is Right, and last night’s episode of Celebrity Family … More... [...]

Last month, The Cribs announced a new album, Night Network — the follow-up to 2017’s 24-7 Rock Star Shit — and shared its lead single, “Running Into You.” Today, the British brother trio are sharing another track from it called “I Don’t Know Who I Am,” a collaboration with Sonic Youth’s Lee Ranaldo, … More... [...]

Watchmen Made Comic Book History at the 2020 Emmys

The awards show might have looked different this year, but an Emmy is an Emmy—and HBO’s Watchmen took home quite a few. Read more… Source: https://io9.gizmodo.com/watchmen-made-comic-book-history-at-the-2020-emmys-1845127369 Indie Brew found this story and shared it with you. The Article Was Written/Published By: Beth Elderkin on io9, shared by Kaitlyn Jakola to Gizmodov [...]

Steve Arrington: Down to the Lowest Terms: The Soul Sessions

On his first proper comeback album, the funk legend displays his unmatched vocal chops over polished, modern production. Source: https://pitchfork.com/reviews/albums/steve-arrington-down-to-the-lowest-terms-the-soul-sessions/ Indie Brew found this story and shared it with you. The Article Was Written/Published By: Noah Yoov [...]

Gladie — the new-ish project fronted by Cayetana’s Augusta Koch — released their debut album, Safe Sins, at the beginning of the year. They followed it up a few months later with the Orange Peel EP and now, a couple months after that, Gladie have put out another new EP, Thank … More » Source:... [...]