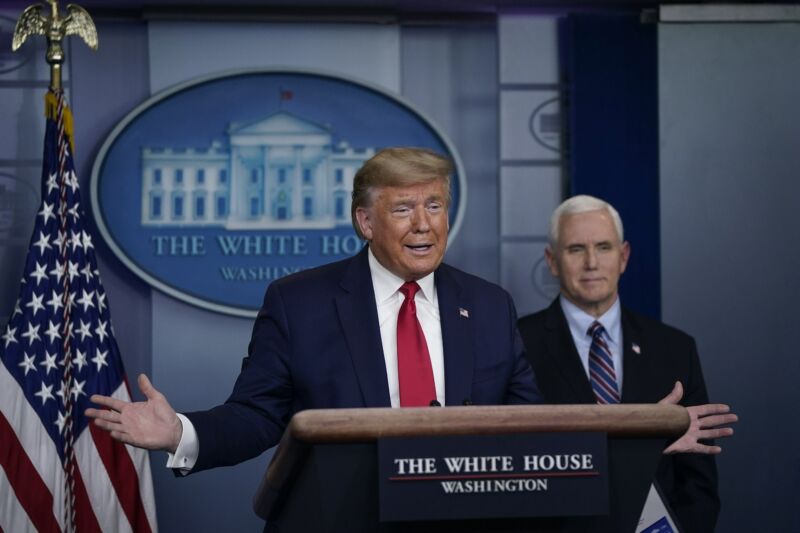 Enlarge / President Donald Trump speaks as Vice President Mike Pence looks on during a briefing on the coronavirus pandemic at the White House on March 26, 2020. (credit: Getty Images | Drew Angerer )

The United States is expected to see about 200,000 new COVID-19 cases per day by June 1, with daily deaths hitting 3,000, a leaked Trump administration document shows.

“As President Trump presses for states to reopen their economies, his administration is privately projecting a steady rise in the number of coronavirus cases and deaths over the next several weeks. The daily death toll will reach about 3,000 on June 1, according to an internal document obtained by The New York Times, nearly double the current number of about 1,750,” the Times reported today. “The projections, based on government modeling pulled together in chart form by the Federal Emergency Management Agency, forecast about 200,000 new cases each day by the end of the month, up from about 25,000 cases a day currently.”

The Times published the document, which is titled “Centers for Disease Control and Prevention Situation Update.” These charts show the projections of new daily cases and deaths as well as how confirmed cases and deaths have risen since the pandemic began:

Source: https://arstechnica.com/?p=1673234
Droolin’ Dog sniffed out this story and shared it with you.
The Article Was Written/Published By: Jon Brodkin

Animal Collective have released a new EP called Bridge To Quiet. They announced it yesterday in a n

Sebastian Bach, Fred Coury and the Bulletboys also weighed in on the COVID-19 mask-wearing debate.

This month’s selection showcases the depth and breadth of the genre, and calls attention to how amb

Tomorrow, the prolific and long-running Japanese fuzz-metal overlords Boris will self-release their

Patrick Stewart On His Return To ‘Star Trek’: ‘I’m Braver Now Than I Was’

Stewart is back as Jean-Luc Picard in the CBS All Access series Star Trek: Picard. He says he’s cha

On his 70th studio album, William Nelson reflects on life experience, love and mortality, while Bri

Running into a school crush while high on acid resulted in the ‘Damn the Torpedoes’ classic. Contin

With the ongoing pandemic, heading to the movie theater may seem like a risky proposition. Drive-in

One Band To Watch teaming up with another: It’s a beautiful thing. Porridge Radio, the Brighton ind