The video, said to have been shot on Friday, shows North Korea’s leader cutting the red ribbon at a new plant in South Phyongan Province. The smiling Kim Jong-un is pictured meeting the workers of the plant and touring the facility alongside other officials, including his sister Kim Yo-jong.

While the plant’s workers are seen wearing face masks as a precaution against coronavirus, none of the officials had their faces covered. The workers also met the country’s leader in a tightly-packed formation with no distancing, thus the protective equipment appears to have been just for show.

The video comes after a long absence of the North Korean leader, who did not appear in public for more than two weeks. Kim’s disappearance prompted rumors of illness and even death by a variety of causes – ranging from a botched heart surgery to a mishap during a missile test – that have been actively spread by Western media.

The reports on Kim’s health, however, lacked any solid proof and were backed only with accounts from various “intelligence” and “defector” sources. The absence of facts did not stop the media from indulging in the most wild speculation on the future of North Korea and Kim’s potential successor. 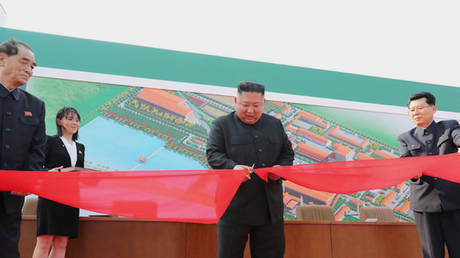 US President Donald Trump, who was asked about Kim by reporters on a near-daily basis, also dropped a cryptic remark about him earlier this week. Trump said he actually had “a very good idea” about Kim’s condition but “can’t talk about it.”

Source: https://www.rt.com/news/487633-kim-jong-un-new-video/?utm_source=rss&utm_medium=rss&utm_campaign=RSS
Droolin’ Dog sniffed out this story and shared it with you.
The Article Was Written/Published By: RT