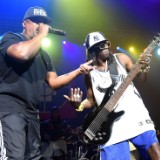 Bernie Sanders is returning to Southern California this weekend and will have some help from one of hip-hop’s greatest political outfits.

In an Instagram post late Wednesday night, Sanders’ campaign announced that a rally will take place this Sunday (March 1) in Los Angeles and that Public Enemy will serve as the musical guest. The…

Source: https://www.spin.com/2020/02/public-enemy-to-perform-at-bernie-sanders-rally-in-los-angeles/
Indie Brew found this story and shared it with you.
The Article Was Written/Published By: Daniel Kohn