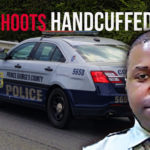 While waiting handcuffed in a police car after a traffic stop, a man was shot 7 times by Cpl Michael Owen from Prince Georges County, MD. The officer was not wearing his body camera at the time of the shooting and the Police department has already placed under a consent decree for unconstitutional policing and excessive use of force against residents.

Source: https://therealnews.com/stories/cop-charged-for-shooting-handcuffed-man_7_times
Droolin’ Dog sniffed out this story and shared it with you.
The Article Was Written/Published By: Automation User