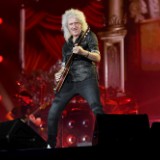 In November 1984, Queen released “Thank God It’s Christmas,” a rare holiday single that only appeared on their Greatest Hits III album after its release as a 7″ single. Now 35 years since its release, the band has unveiled a new animated video for the single.

In the Justin Moon-directed clip, a man sits…

Source: https://www.spin.com/2019/12/queen-thank-god-its-christmas-video-watch/
Indie Brew found this story and shared it with you.
The Article Was Written/Published By: Rob Arcand