Jesus is apparently a fan of Brazilian club Flamengo after donning the Rio team’s colors ahead of the Copa Libertadores final against Argentina’s River Plate.

The Flamengo marketing team and shirt sponsors adidas made sure the whole of Rio de Janeiro was aware of the monumental nature of the occasion by illuminating the iconic Christ the Redeemer stature which overlooks the city in the famous red and black stripes of their club.

Nicknamed O Mengão, the Brazilian side will face a tough task in aiming to add to their solitary Copa title, claimed in 1981 in what was their last appearance in South America’s biggest club football showpiece.

River are aiming for back-to-back Copa crowns and their third in four years. This year’s final will be a one-off affair for the first time ever, and follows the tumultuous events of last season which saw the second-leg match between River and bitter Argentine rivals Boca Juniors moved to Madrid after violent clashes. 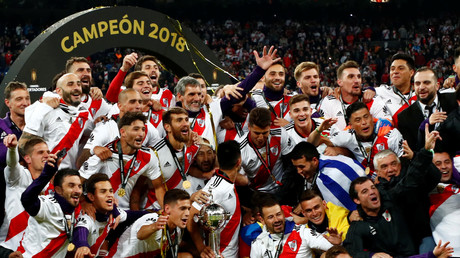 Managed by appropriately-named Portuguese coach Jorge Jesus, Flamengo’s form as been superb in recent months, and they are unbeaten in 25 matches heading into Saturday’s match.

Source: https://www.rt.com/sport/474166-flamengo-shirt-christ-the-redeemer-copa/?utm_source=rss&utm_medium=rss&utm_campaign=RSS
Droolin’ Dog sniffed out this story and shared it with you.
The Article Was Written/Published By: RT