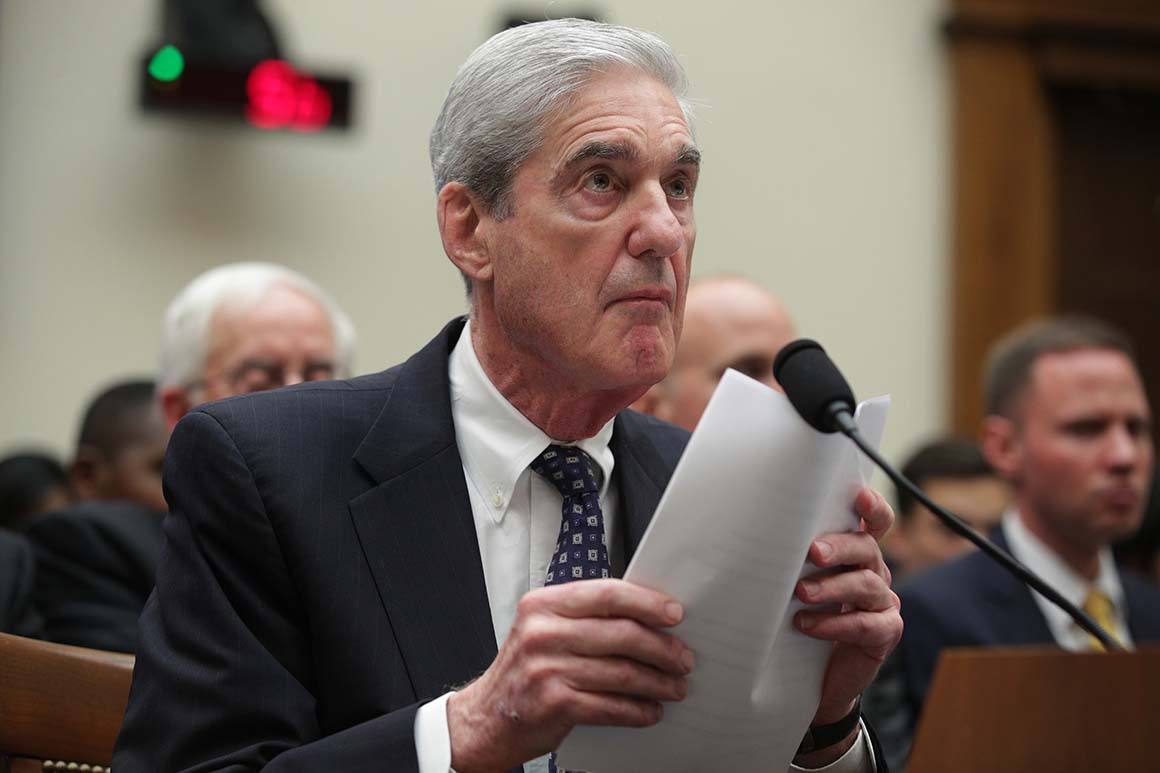 A federal judge signaled Tuesday that she might give House Democrats access to some of Robert Mueller’s remaining secrets.

During a two-plus hour hearing, Beryl Howell, the chief judge for the U.S. District Court, pointedly challenged the Justice Department to explain its “extraordinary position” of trying to block lawmakers from seeing the special counsel’s grand jury materials, which include testimony and evidence that has been kept private since the Mueller probe ended in March. Grand jury material is protected by law, but judges can release information under special circumstances.

If Howell ultimately rules in Democrats’ favor, it would represent a major legal victory for them that could help expand Congress’s impeachment inquiry of President Donald Trump. While the probe initially started earlier this year with a broader focus on Mueller’s findings, the Democrats in recent weeks have homed in on the president’s alleged attempt to pressure Ukraine into investigating former Vice President Joe Biden and his family.

Howell on Tuesday said that under both Supreme Court and federal appellate court precedent, she must give “enormous deference” to House Democrats and their interest in the grand jury materials because of their impeachment inquiry. She even indicated that the impeachment probe was a precursor for releasing the Mueller materials.

The judge, an appointee of President Barack Obama, didn’t issue an opinion Tuesday in the Democrats’ three-month lawsuit, but her comments offered the House a glimmer of hope that it may still get to see several blacked-out words, phrases, sentences, paragraphs and entire pages from the report Mueller released in April summarizing his probe.

During Tuesday’s hearing, the top lawyer for the Democrats told Howell that the House impeachment inquiry still includes issues tied to the Mueller probe and hasn’t just been whittled down to Trump’s efforts to pressure the president of Ukraine into launching investigations of his political opponents.

“I can’t emphasize enough — it’s not just Ukraine,” House counsel Doug Letter said, adding that the Judiciary Committee “could easily” adopt articles of impeachment against Trump that deal with the Mueller-related themes of obstruction of justice and election interference.

House Democrats filed their initial lawsuit seeking the Mueller grand jury materials in late July, arguing that they need to peer behind hundreds of redactions from Mueller’s nearly 450-page report to help them determine whether Trump and other key witnesses have been telling the truth in their sworn testimony.

One example Letter gave Tuesday was the president’s public statements claiming that his former top White House lawyer, Don McGahn, lied to Mueller’s investigators. If the Democrats determine Trump wasn’t telling the truth, it could end up being another impeachment article against him, Letter said.

Elizabeth Shapiro, the head of the DOJ civil division, countered that Democrats should be denied access to the Mueller grand jury materials, arguing that a congressional impeachment proceeding doesn’t meet the criteria to release them. And even if the court did rule that a congressional impeachment should free up grand jury material, she noted that the House hasn’t actually done anything to formally declare an impeachment process. Indeed, the House has yet to hold an official vote on the matter.

Howell said she agreed that a House vote to authorize impeachment proceedings would “make my life very much easier” in ordering the release of the Mueller materials. But even without that vote, Howell said she still likely was obligated to give the House what it said it needed. For his part, Letter argued that the House only has to announce it’s holding an impeachment investigation, and House Speaker Nancy Pelosi has put her stamp on the chamber doing exactly that.

“She’s totally on board with this. This is the position of the House,” said Letter, who explained that he speaks with Pelosi regularly and had a conversation about the court hearings with the California congressman on Monday night.

Tuesday’s hearing included a number of other illuminating exchanges involving Howell, who oversaw the Mueller grand jury as the top judge of the federal court in Washington, D.C. She pressed Shapiro repeatedly to explain whether Mueller’s team had perhaps already shared grand jury information with foreign governments, given that it made 13 requests to overseas officials during its probe.

“I’d like to know how much this information the department is resisting giving to the U.S. Congress has already been shared with foreign government officials,” Howell asked, pressing the DOJ attorney to return with an answer by Friday.

Howell also asked Letter point-blank whether a president could be impeached for lying to the public.

“I believe so, yes, absolutely,” he replied. And she asked if Trump needed to have committed a crime to be impeached. “No, he does not,” the House lawyer answered.

The judge offered several other comments indicative of her attention to the Mueller case and the Trump presidency. She noted that the longstanding DOJ policy that a sitting president can’t be indicted had never been the subject of a direct judicial opinion. And she noted that the 22-month-long Mueller probe — which the president’s allies constantly berated for its length — was actually “among the shortest special counsel investigations ever.

At another point, during an exchange over Trump’s claims about his former aides giving misleading testimony, the judge interjected, “I can’t keep up with what the president says to be honest.”

Central to the House Democrats push for the Mueller materials is the historical precedent that DOJ in all previous impeachment investigations — involving presidents and judges — did not fight Congress over access to grand jury materials.

i”Frankly, we’re baffled why suddenly this practice over many decades is now reversed,” Letter said.

Howell picked up on that point by pressing DOJ to say whether then-U.S. District Court Chief Judge John Sirica was wrong in 1974 to let Congress access a detailed “road map” of the Watergate grand jury materials as it considered President Richard Nixon’s impeachment.

Shapiro argued that if the same Watergate road map case arose today, there’d be a “different result” because the law has changed since 1974. She said the judge wouldn’t be able to do the same thing absent changes to the grand jury rules and statutes.

Democrats have faced resistance at nearly every turn in their push for materials central to their impeachment investigation. A separate lawsuit seeking McGahn’s testimony via subpoena will be argued Oct. 31 before a different federal judge. The Trump administration has also stymied several demands for documents and depositions connected to the Ukraine affair.

On the Mueller grand jury materials, Shapiro said DOJ is in the process of producing FBI notes to the House for 33 interviews tied to the special counsel investigation. There had been delays, she explained, because of decisions to redact materials labeled “confidential” or involving “presidential communications.” But she said there haven’t been any White House claims of executive privilege.

Howell gave both the Justice Department and House lawyers several deadlines as she proceeds toward a decision, which she noted at one point likely would just be a “speed bump” on the way to an inevitable challenge to the U.S. Court of Appeals in Washington of any ruling.

No lawmakers from the House Judiciary Committee were present for Tuesday’s hearing, though top Democratic staffers for the panel were in attendance.

“We are gratified at the seriousness with which the court addressed our petition for grand jury information relating to the House impeachment inquiry,” Rep. Jerrold Nadler, the New York Democrat chairing the Judicial panel, said in a statement after the hearing. “We remain confident in our case and look forward to the resolution of this matter.”

Source: https://www.politico.com/news/2019/10/08/mueller-house-democrats-impeachment-lawsuit-039516
Droolin’ Dog sniffed out this story and shared it with you.
The Article Was Written/Published By: dsamuelsohn@politico.com (Darren Samuelsohn)