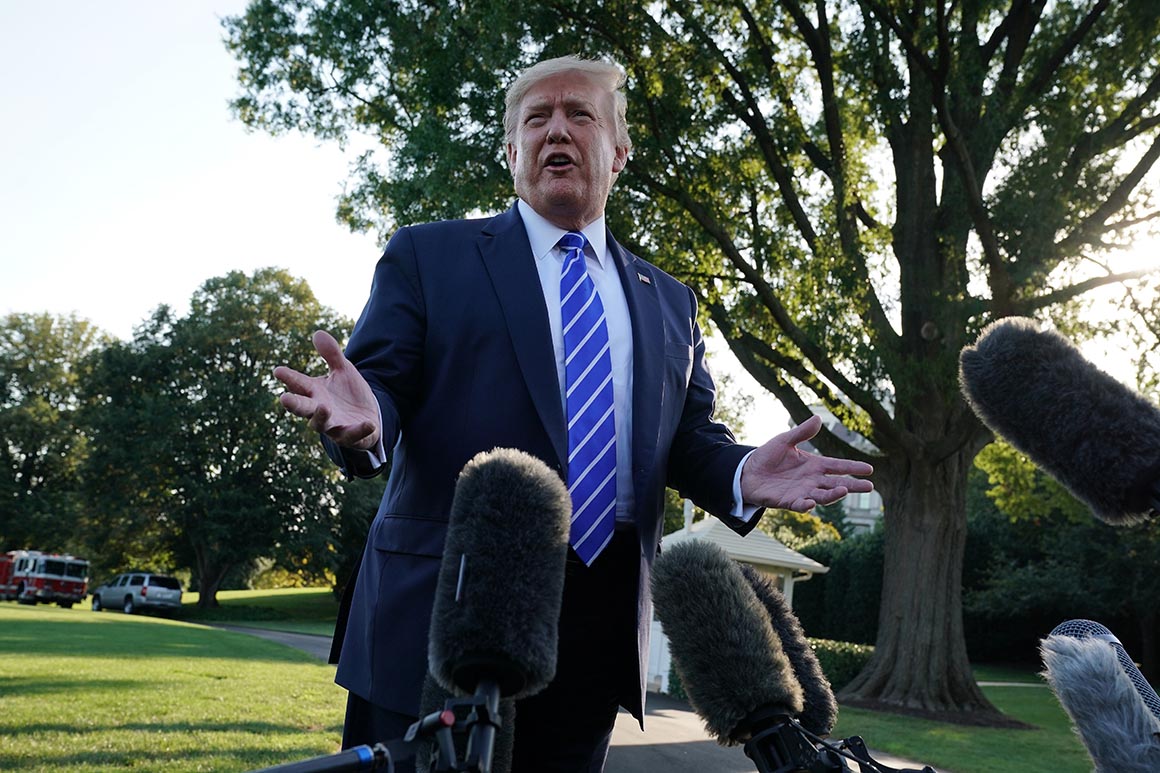 President Donald Trump is staring down a series of trigger points that will determine whether he enters the 2020 campaign backed by his most valuable asset — a healthy U.S. economy — or empty-handed and further on the defensive.

The White House faces a time crunch on several major policy fronts this fall. The president will need to appease farmers and factory workers about his ongoing trade standoff with China, in which he shows no sign of backing down. His administration is trying to cajole the Democratic-controlled House to approve a renegotiated trade deal covering the U.S., Mexico and Canada. And the Trump team must find a way to calm Wall Street to prevent investors from denting one of his proudest achievements — a surge in the stock market since his election.

Trump’s economic record took another turn into dangerous territory Tuesday with a widely tracked gauge of the U.S. manufacturing sector contracting for the first time in more than three years, walloping the stock market and reigniting fears of a recession. It added to mounting concerns about a global economic slowdown under the weight of Trump’s trade war.

More than at any point in his presidency, Trump’s biggest asset looks like it could become a liability.

“The state of the economy is the single biggest factor in determining whether the president is reelected, and right now, it feels like they are riding a rubber ducky into alligator-infested waters,” said Michael Steel, a partner at Hamilton Place Strategies and former top aide to Republican House Speaker John Boehner.

It all adds up to a make-or-break stretch for the Trump economy, which aides and advisers believe should play the starring role in the president’s pitch for reelection. On Tuesday, the Trump campaign hosted two economic roundtables at local small businesses in North Carolina to “showcase how President Trump’s economy continues to work for North Carolina’s business community and families alike,” the campaign said.

Beyond winning concessions from China, the biggest political objective for 2019 remains getting the U.S.-Mexico-Canada Agreement, or USMCA, through Congress. A victory for the deal, which still faces heavy skepticism from progressive Democrats in the House, would remove one big piece of uncertainty for businesses with supply chains that run throughout North America. And it would give Trump a huge talking point for the campaign trail to show he was able to replace the prior North American Free Trade Agreement, known as NAFTA.

But the legislative calendar is growing very short for the year and the White House knows Democrats will be even less interested in handing Trump a victory ahead of an election.

“Once you get into the 2020 campaign, it is pretty hard to see Democrats passing the USMCA in an election year. I do think there is more optimism now about it passing this fall,” a senior administration official said.

Moody’s Analytics chief economist Mark Zandi said the U.S. will fall into a recession if the president keeps escalating the trade standoff with China, including another round of tariff hikes in December. “The president has until the end of the year to turn it around with China,” Zandi said.

The president and the White House are on the offensive to fend off any growing narrative about a potential recession — blaming worrying economic data points on the media, Democrats and the Federal Reserve.

“We don’t anticipate anything but a solid, strong economy. That is a key point. That is our view,” National Economic Council Director Larry Kudlow said last month, just ahead of the G-7 summit. During the same conversation with reporters, Kudlow cited August’s low unemployment claims as a piece of positive economic news out of the federal government.

Trump internal and external advisers know one of their biggest vulnerabilities is weakness in American manufacturing, a sector the president promised to revive with his aggressive trade policy. The pledges helped Trump secure surprising — and quite narrow — wins in key states such as Michigan and Pennsylvania. 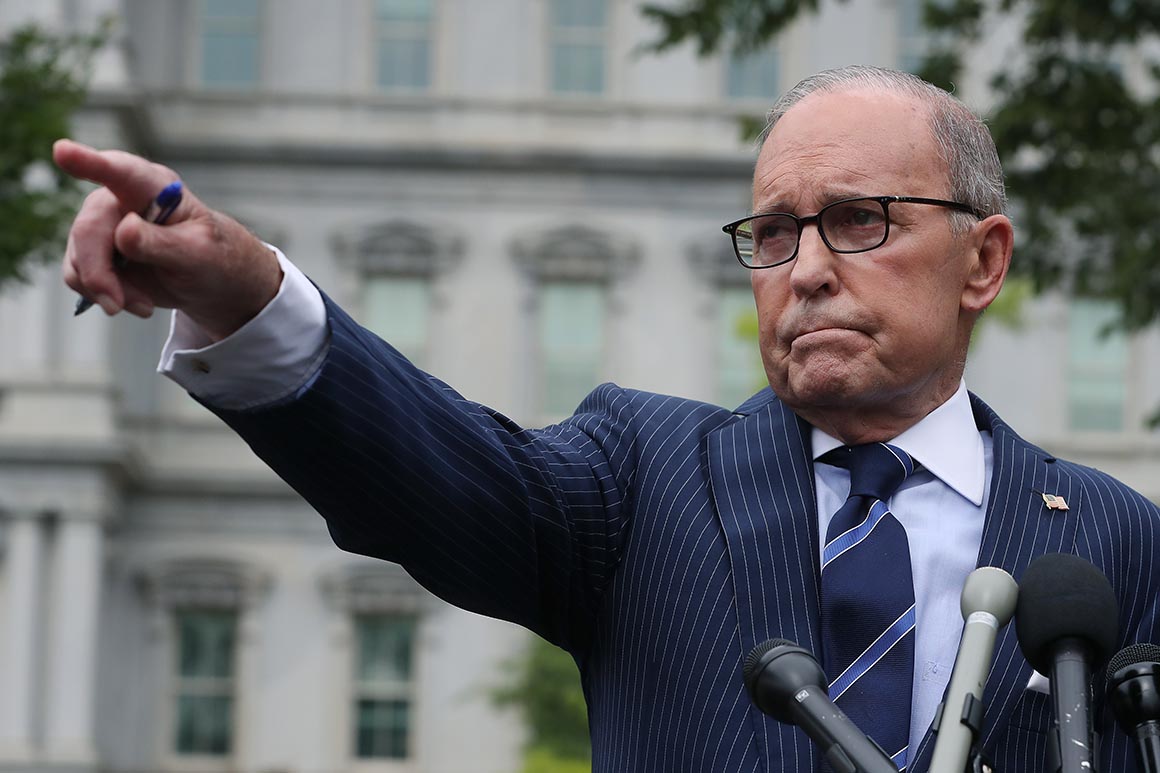 But the manufacturing numbers are moving in the wrong direction for the president. The Institute for Supply Management, a group of purchasing managers, on Tuesday said manufacturing contracted in August and a gauge of export orders, slammed by the trade war, crashed to the lowest level since April 2009 — when the economy was in a severe recession. The ISM’s employment gauge declined, suggesting manufacturers are shedding workers.

Even a surprise detente with China on trade in the coming months — a prospect that seems increasingly unlikely given escalating rhetoric — may not be enough to reverse the sector’s decline. “The primary slowdown in the economy is driven by the trade issue and it’s not really clear how manufacturing would respond if all that somehow got eliminated,” said Timothy R. Fiore, chair of the ISM’s Business Survey Committee. “It’s not like Trump and the Chinese could shake hands tomorrow and everyone could go back to business as usual.”

Trump himself frequently touts the low unemployment rate, Republican tax cuts and the rollback of regulations as major selling points for a second term — even as Republican lawmakers and business leaders grow ever more concerned about the effects of the trade war.

Privately, businesses are doing everything they can to convey directly to the president and his staff the uncertainty that the trade war with China is causing for businesses eager to map out costs as well as supply chains. A new round of tariffs just took effect at the start of this week.

“The trade war with China is like following the bouncing ball. It changes one week to the next,” said Stephen Moore, an informal economic adviser to the White House and distinguished visiting fellow at The Heritage Foundation. “My attitude is, once he gets the trade deal done, he is home free politically. You cannot understate the importance of it.”

Current and former administration officials acknowledge the ultimate fate of the tariffs against China lie solely with the president, who has not been swayed by the pleas of business leaders, or even his own advisers, to cut a deal with China.

A former senior White House official said Trump does not view a protracted trade war with China — even if it means reduced manufacturing and another summer of farmers slammed by retaliatory tariffs — as a political negative.

“Frankly I don’t think he really understands any of this,” the former official said of the economic impact of the trade fights. “The manufacturing slowdown, the lack of corporate investment, what’s happening to confidence — all of this was totally predictable based on what he’s done. But he sees it as a political advantage, that he can tell people he got tough on China and needs to finish the job.”

The official added that there are few senior advisers left in the White House who will push back strongly on Trump’s pugnacious approach to trade. “The sad reality is that in the first 1,000 days of his presidency he managed to get rid of everybody who would tell him the truth or anything he didn’t want to hear.”

Instead, the president has frequently tried to cast the tariffs — incorrectly — as a financial windfall for the U.S., even as they smack American consumers, small business owners and farmers.

“We’re taking in tens of billions of dollars. We’re giving some of the money to the farmers,” Trump told reporters Sunday at the White House about the tariffs. “I’m making the farmers more than whole. The farmers are doing better than if China, frankly, were buying. I’m taking a piece of the massive amount of tariffs, and we’re giving them to the farmers who have been targeted unfairly by China.”

The one note of optimism from the White House is that they are hopeful the trade deal between the U.S., Mexico and Canada will pass Congress. U.S. Trade Representative Robert Lighthizer has been working closely with House Speaker Nancy Pelosi to address Democrats’ concerns, and if he fails, the administration is likely to try to blame Pelosi and the Democrats — much as the president is set to blame others for any downturn in the broader economy.

“The economy is going from a political tailwind for the administration to being a headwind,” said Zandi, the Moody’s Analytics chief economist. “Unless the president finds a way to stand down on the trade war, he will have an economic hurricane to overcome as he runs for reelection.”

Source: https://www.politico.com/story/2019/09/04/trump-economy-recession-2020-1479978
Droolin’ Dog sniffed out this story and shared it with you.
The Article Was Written/Published By: bwhite@politico.com (Ben White)