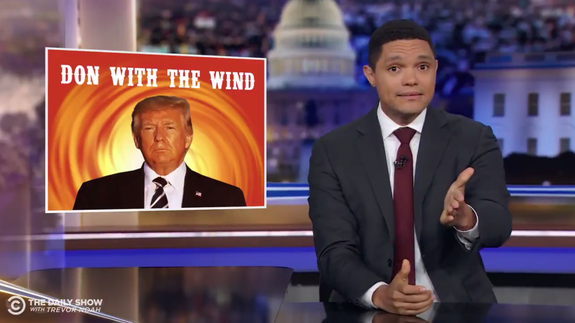 Late show hosts are back after a brief hiatus, and the one thing on everyone’s monologuing minds is Trump’s bizarre handling of Hurricane Dorian, including Jimmy Kimmel, Stephen Colbert, and Seth Meyers.

That also includes The Daily Show‘s Trevor Noah, who was baffled by Trump’s statements surrounding Dorian. Primarily, he looked at Trump’s claim that he was not sure he had “ever even heard of a Category 5” hurricane — even though four have happened while he’s been in office. To demonstrate, Noah ran back-to-back clips of every time Trump previously referred to a Category 5.

Then, Noah noted the backlash against Trump’s golfing during the hurricane, and the president being corrected by the National Weather Service for saying Alabama was in Dorian’s direct path. Read more…

Source: https://mashable.com/video/trevor-noah-trump-hurricane-dorian/
Droolin’ Dog sniffed out this story and shared it with you.
The Article Was Written/Published By: Shannon Connellan