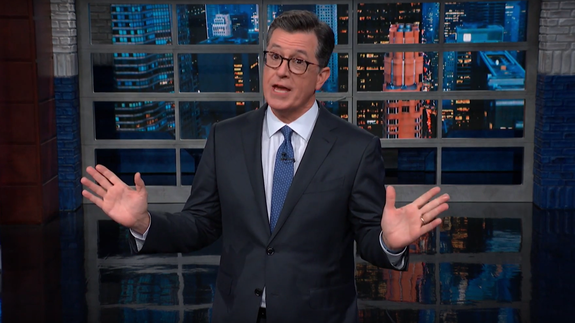 Hurricane Dorian alerts are flying thick and fast, especially across Twitter, but not all of Donald Trump’s are necessarily accurate.

The president tweeted more than a few updates about the storm over the weekend, including one that incorrectly highlighted Alabama as sitting in Dorian’s direct path, something the National Weather Service jumped to correct with their own tweet.

“You know things are bad when the National Weather Service has to fact-check the president,” quipped The Late Show host Stephen Colbert, returned from a two-week hiatus on Tuesday.

Of course, Colbert took aim at Trump’s previous statements surrounding Dorian, in which he said he was not sure he had “ever even heard of a Category 5” hurricane — even though four have happened while he’s in in office — and the president’s unbelievable suggestion to “nuke” hurricanes. Read more…

Source: https://mashable.com/video/stephen-colbert-trump-hurricane-dorian-comments/
Droolin’ Dog sniffed out this story and shared it with you.
The Article Was Written/Published By: Shannon Connellan