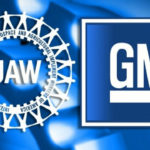 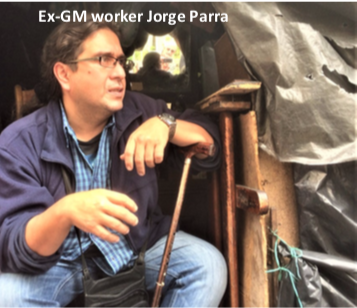 Seven years ago, UAW-GM VP Joe Ashton flew to Bogota, Colom- bia (S.A.) to meet with ex-GM workers who had formed an injured workers’ association, ASOTRECOL (pronounced Ah-so-treh-col). They were fired after being injured at work, and were denied work- ers’ comp. They were in the 1st year of their protest, living in a tent encampment across from the U.S. Embassy and were in the 22nd

day of a hunger strike, with lips sewn shut. Workers at the 1970s-era factory were routinely being fired after suffering disabling injuries, assembling Chevy subcompacts for the local market. The company-run “union” (called a “collective pact”) was no help and the judicial system was corrupt. Months before Ash- ton’s arrival, ASOTRECOL’s president Jorge Parra (one of the fired workers), had travelled to UAW Solidar- ity House, seeking help. When Ashton finally showed up, he was accompanied by a bunch of GM execs.

With Ashton’s blessing, the execs made a “final offer” to the workers that didn’t cover their medical costs (including surgeries) and left them unable to support their families. When ASOTRECOL tried to negotiate a better settlement, GM packed up and left. Repeating GM’s line, Ashton blamed the breakdown on the workers. GM rewarded him for these and other betrayals with a seat on the GM Board of Directors, right after his UAW retirement. He’s since been ejected. 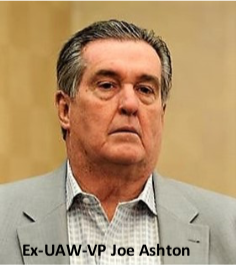 Recent media reports implicate Joe Ashton (identified as “union official 1”) in
the spreading UAW corruption scandal. Federal prosecutors accuse him of
taking over $500,000 in kickbacks while he was a VP overseeing the UAW-GM
joint funds. The payoffs worked. At GM’s bidding, Ashton and his “Admin
Caucus” actively interfered with efforts to build solidarity on behalf of the Colombian workers.

attendees might endorse their Sitdown-like heroism. Jewell went on to be UAW- FCA VP. Soon he’ll start a 15-month jail term for accepting illegal bribes via Joint Funds. The Admin Caucus has censored the Colombian workers’ story from the pages of “Solidarity” magazine, and stopped other unions from supporting them. The Canadian autoworkers’ union, UNIFOR, (for example) declined to help ASOTRECOL after the UAW told their leadership in 2013 that, “the workers in Colombia wanted more than what could possibly be negotiated.” 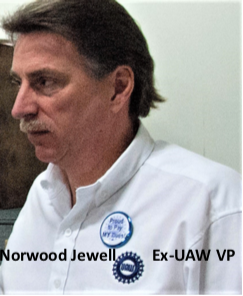 Is that what UAW autoworkers will hear during the current contract talks? — That we want “more than could possibly be negotiated?”

The Colombian workers are in the 9th year of their fight at the tent encampment without a settlement. This is the moment that our solidarity must overcome the corruption in the lead-

ership. While we push for contracts that meets workers’ needs, workers must demand that the UAW assist the valiant ASOTRECOL members to win a just settlement. We’re in the same fight against the same bosses and the same corruption. Let’s build SOLIDARITY and win justice for workers here and in Colombia! To help & for info, see: asotrecol.org & fb “Solidarity with injured Colombian GM workers”

Source: https://therealnews.com/columns/uaw-member-solidarity-will-overcome-corruption-in-the-leadership-demand-good-contracts-worker-justice
Droolin’ Dog sniffed out this story and shared it with you.
The Article Was Written/Published By: Hezvo Mpunga