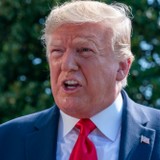 President Donald Trump cut out of Washington, D.C., early on Friday, August 9, to attend two campaign fundraisers held in the Hamptons. Although the events were closed to the press, the New York Post reports that the president spent part of the second fundraiser doing impressions of Japanese Prime Minister Shinzō Abe and South Korean President Moon Jae-in’s…

Source: https://www.spin.com/2019/08/trump-racist-impressions-hamptons-fundraiser-abe-moon/
Droolin’ Dog sniffed out this story and shared it with you.
The Article Was Written/Published By: Maggie Serota