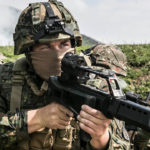 Annette Groth discusses the three demands by the U.S to Germany to increase its military power and presence overseas, and the new right-wing minister of defense Annegret Kramp-Karrenbauer. For now Germany is loathe to send troops or ships to Syria or Hormuz, but Kramp-Karrenbauer has already announced her intention to increase military spending to 2% of GDP, which would turn Germany into a military giant

The post Will Germany Become the Military Power it Once Was? appeared first on The Real News Network.

Source: https://therealnews.com/stories/will-germany-become-the-military-power-it-once-was
Droolin’ Dog sniffed out this story and shared it with you.
The Article Was Written/Published By: Sidra Sheikh