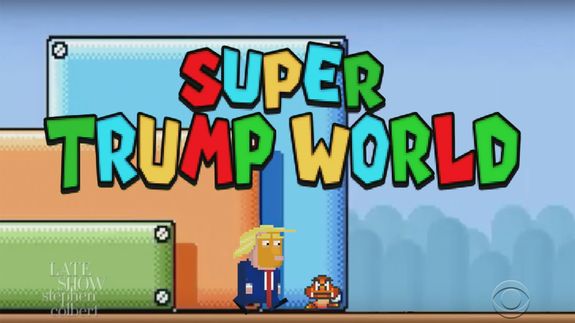 Following the tragic mass shootings that took place in Texas and Ohio, a number of Republicans rolled out a tired scapegoat: video games.

Despite evidence to the contrary, video games have often been singled out as a cause of violence in U.S. society. In a recent press conference, Trump put them in the spotlight once again, condemning the “gruesome and grisly video games that are now commonplace.”

The Late Show, however, was not about to accept his statement quietly. In the Super Mario parody above, a little animated Trump jumps a goomba before being confronted by the Italian plumber himself. Read more…

Source: https://mashable.com/video/stephen-colbert-trump-super-mario-parody-video-game-violence/
Droolin’ Dog sniffed out this story and shared it with you.
The Article Was Written/Published By: Sam Haysom