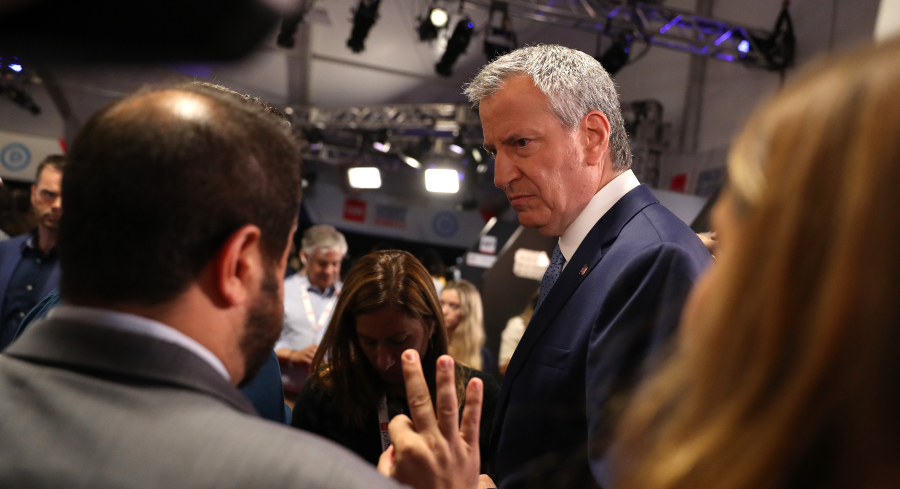 “In my heart, yeah,” the mayor said, when asked during a wide-ranging interview at POLITICO’s headquarters Monday if Sanders would have won the general election three years ago. “You know, hindsight’s 20/20, but I think when we look at it now, that was a moment where there was such desire for change,” he added.

De Blasio’s embrace of Sanders comes as the Vermont senator is one of the front-runners in a presidential race where de Blasio is struggling to gain traction. He is polling at zero to 1 percent and had about 6,700 individual donors as of the latest filing — far short of the 130,000 needed to qualify for the next Democratic debate. He declined to answer a question about whether he would remain in the race if he doesn’t get into next month’s debate.

“Omg,” emailed Jennifer Palmieri, Clinton’s head of communications. “[I]f he thinks Bernie would have beaten Trump then he should have had the foresight to endorse him in 2016. His view is of little importance now.”

Mark Longabaugh, a top Sanders adviser in 2016, reacted with satisfaction. “I think Bill de Blasio is correct,” he said in a text message.

Since Clinton lost in 2016, de Blasio has showered the Vermont senator with attention and accolades. The mayor wavered for months on his 2016 Democratic endorsement, even inviting the candidates to a forum that never materialized to assess their stances on current issues before eventually backing Clinton, whose 2000 Senate race he ran.

He invited Sanders to swear him in for his second term in 2018 and spoke at the Sanders Institute in Vermont last November. He described meeting Sanders as one of the highlights of his first term as mayor and said “no one has done more to change the discussion in this country on the question of income inequality.”

In a lightning round at the end of the 72-minute interview, de Blasio even named Sanders as the candidate he’d most enjoy road-tripping with. He offered West Virginia as the destination on the fantasy vacation, saying the duo could try to convert working-class Republicans to the Democratic Party. “That would be fun,” he added.

And on the debate stage last week, de Blasio in many ways sounded like Sanders with promises to “tax the hell out of the wealthy” and criticism of the private health insurance industry. The two squared off on different days of the two-night debate.

Despite all his affection for the Vermont senator, who was born and bred in Brooklyn, de Blasio still says he has a better shot at winning over disaffected Democrats.

“I think the world of Bernie, but I would say I’m someone who has put these ideas into action consistently and effectively in a really tough environment. And I’m someone who can build the kind of coalition we’re going to need to win,” he said. “I would argue that I share a lot of views with Bernie, for example, but I can say to people I actually made these things come alive.”

De Blasio wouldn’t commit to capitalizing on the energy in the left flank of the Democratic Party that has catapulted unabashed progressives like Rep. Alexandria Ocasio-Cortez (D-N.Y.) into office in his home state when moderate Democratic Congress members face challenges next year.

He has been hesitant to embrace liberal insurgents in his own state, sitting out the Queens district attorney’s race this year rather than endorse Tiffany Cabán, whose reform platform won the backing of Sanders and fellow Democratic presidential contender Sen. Elizabeth Warren (D-Mass.). He neglected to endorse former actor Cynthia Nixon, who was a surrogate in his first mayoral race, in her left-leaning primary challenge last year against New York Gov. Andrew Cuomo, a historically centrist Democrat.

“Each one of those situations is individual,” he said. “And also when you’re mayor of a city, it adds a whole other element. I don’t just go at it as someone with an ideological view. I have to think about a lot of other factors.”

Reps. Eliot Engel and Carolyn Maloney are among the New York Democratic incumbents facing challenges on the left.

For all his executive experience in New York City, de Blasio has not had to face significant Republican opposition as he would in the White House, particularly if Republicans hold on to the Senate. Asked, following last weekend’s mass shootings, how he would approach negotiations with Republicans in Congress on an issue like gun control, de Blasio said “I think it’s more of a political change dynamic than a negotiation.”

He explained that Democrats had to organize on gun control and that “I think this is the time to go on the offensive but a targeted offensive” to particular states.

“In the end if you’re a senator who does not believe you will keep your seat if you vote against gun safety legislation, you are not going to just do what Mitch McConnell tells you to do.”

Source: https://www.politico.com/states/new-york/city-hall/story/2019/08/06/de-blasio-says-bernie-would-have-won-in-2016-1130714
Droolin’ Dog sniffed out this story and shared it with you.
The Article Was Written/Published By: Alex Thompson