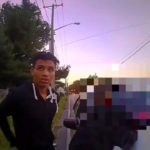 The Greensboro, Maryland police officer Daniel Webster, who was involved in the death of an African-American teen, has been decertified by a state agency that sets training standards for law enforcement.

A spokesman for the Maryland Division of Corrections confirmed the decertification occurred during a meeting of the Police Training and Standards Commission on July 26. However, he could not reveal details about what prompted the board’s decision, citing laws which preclude discussing personnel matters.
Previously it was reported that at least 26 incidents of use of force from Webster’s former job in Delaware were omitted from his application to work in Maryland.
Webster was one of three officers who chased Anton Black, a 19-year-old African-American track and football star, after a white woman called police and alleged Black had kidnapped his twelve-year-old cousin.
Webster was joined by two other officers who chased Black to his mother’s home, where Webster tased him and forced him to the ground. Black died minutes later as one of the arresting officers sat on top of him.
The Maryland State Medical Examiner ruled his death an accident due to an underlying undiagnosed heart defect. But an independent pathologist consulted by The Real News determined Black died from positional asphyxiation, a form of suffocation that occurs when downward pressure is placed on someone lying on the ground.
The arrest occurred in September of 2018, but state police and the Medical Examiner’s Office waited nearly five months to release details of their investigation. Caroline County State’s Attorney Joe Riley declined to press charges.
Webster’s hiring was controversial from the start. Residents who spoke to The Real News said his arrival marked an embrace of more aggressive police tactics for the town of only 2000 residents. City officials denied that Webster’s hiring marked a pivot towards more aggressive tactics when asked by TRNN.
However, in a previous job in Dover, Delaware, Webster was charged after he was caught on dashcam video kicking an African-American suspect in the jaw. The incident lead to charges of assault, but Webster was acquitted.

The post Cop Whose Arrest Lead to Black Teen’s Death Decertified by State appeared first on The Real News Network.

Source: https://therealnews.com/columns/cop-whose-arrest-lead-to-black-teens-death-decertified-by-state
Droolin’ Dog sniffed out this story and shared it with you.
The Article Was Written/Published By: Hezvo Mpunga