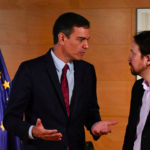 Spain’s Socialist party PSOE and the leftist Unidas Podemos party failed to form a coalition government and now new elections loom if new talks go nowhere. It looks like PSOE’s lack of interest in a leftist coalition was the reason for the failure, says Sebastiaan Faber

The post Why Yet Another General Election for Spain? appeared first on The Real News Network.

Source: https://therealnews.com/stories/why-yet-another-general-election-for-spain
Droolin’ Dog sniffed out this story and shared it with you.
The Article Was Written/Published By: Sidra Sheikh