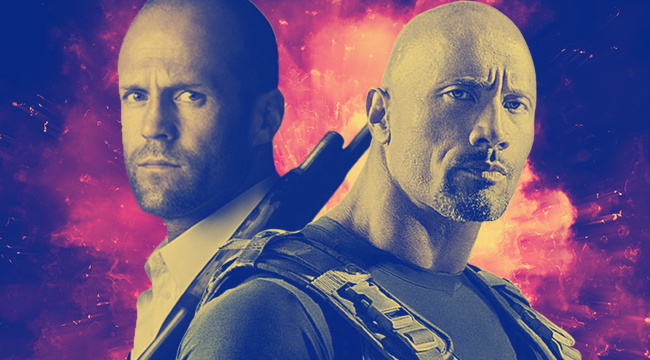 The joy of watching a Fast and Furious movie is sort of like the joy of being American. The franchise is a celebration of being louder, brasher, younger, dumber — of excess just because.

They even have the feel of new money about them. Whereas Marvel and Star Wars movies come with extensive backstories and the weight of fan expectations, Fast and Furious seemed to spring fully formed from a movie producer’s attempt to understand the youngs. They read an article on street racing and hoped to capitalize on a culturally bankrupt age (the early aughts), with mumble-mouthed actors playing second fiddle to loud, ugly vroom cars. A half-cocked idea became a surprise phenomenon, and now that same half-bright C-student of a franchise has unlimited money to blow through as fast as they can, replacing the mumble-mouths with the biggest action stars in the world and smashing the vroom cars into nuclear subs and driving them off skyscrapers into military helicopters.

To see The Fast And The Furious grow into a billion-dollar franchise is like watching some real-life version of King Ralph or The Beverly Hillbillies, where boorish upstarts burn four-wheeler rubber across marble floors.

The Rock plays Luke Hobbs, originally introduced as the always-damp diplomatic security service (DSS) agent trying to take down Dom Torretto’s gang in Fast Five. Initially he played antagonist, but there’s nothing this franchise and its fanbase respects more than American beef, and they couldn’t even get through one movie without teasing an eventual face turn (which came at the end, when Hobbs defied his superiors to let Dom vroom car his way off into the sunset, Point Break-style). Jason Statham plays Deckard Shaw, older brother to Furious 6‘s Owen Shaw, played by Luke Evans, and blah blah blah, he’s The Stath, okay? It’s the one character he plays, and with such an illustrious career droivin’ flash sazz wagons and knobbin’ fit birds he was a perfect fit for the franchise.

Early on we get a split-screen side-by-side of Hobbs and Shaw, going about their respective days, Hobbs cracking some eggs into a glass to chug before he pumps some iron, Shaw cracking some eggs into a bowl to make an omelette for the sexy lady in his bed, whom he’s presumably just finished satisfying sexually. Eventually, they end up in similar situations, taking on multiple bad guys and dispensing gratuitous crotch trauma. They’re different, yet the same! Brothers in crotch trauma.

Meanwhile, in some other part of the world, sexy MI-6 agent Hattie (Vanessa Kirby) is trying to retrieve a synthetic supervirus, which she ends up injecting into her own body, thus turning herself into a human bioweapon/time bomb/Macguffin. In order to get it back, the CIA, in the form of wise-cracking agent Locke, played by Ryan Reynolds, naturally wants muscle-bound DSS agent Hobbs to team up with British supercriminal Shaw. Hobbs & Shaw director David Leitch previously directed Reynolds in Deadpool 2, and Reynolds’ homoerotic banter almost feels like a tie-in sequence.

Hobbs, Locke, and Shaw — their philosopher-inspired names are a perfect meta-joke on Hobbs & Shaw, which inspires the opposite of introspection. It’s more like an extravagant fireworks show, where stuff blows up into a thousand shiny particles and you think “Heh, whoa.” At one point, when it was revealed that Hattie, the only female character in the film, was actually Shaw’s sister (mentioned two scenes earlier), there was a palpable “whoa” that echoed throughout the theater. At which point my screening partner Matt Lieb leaned over and whispered, “Trump is going to be president forever.”

But it’s not that Hobbs & Shaw attracts dumbness so much as inspires it. You watch it with your mouth dangling half-open, chuckling like Beavis And Butthead, and that’s part of the appeal. Spectacle doesn’t need to be smart.

There are numerous references to and even flashbacks of, Jason Statham (born 1967) and Vanessa Kirby’s (born 1988) characters “growing up together.” Unlike The Rock’s constant dampness, there are no meta-jokes about it. This unacknowledged age gap is of a piece with the franchise’s leering tone — think the camera swooping between the race starter’s legs right underneath her crotch in Furious 7 or the gratuitous close-ups of water dripping off Nathalie Emmanuel’s pubic mound in The Fate of the Furious — but Hobbs & Shaw is chaste in a way that feels a little like PG porn. It never holds back with explosions, but when it comes to sex… ooh, the foreign censors might not like that.

The hardest thing for the Fast and Furious franchise has been to improve on Furious 7, which was the moment when the franchise finally left street racing behind in favor of pure, distilled excess. The stunts dropped the pretense of believability and went for inspired absurdity, and were better for it. Hobbs & Shaw has a helicopter sequence that’s arguably just as silly and inspired as the Paul Walker-hanging-off-a-cliff-edge-by-a-car’s-spoiler scene in Furious 7, but still suffers some from coming second.

Leitch and his screenwriters Chris Morgan and Drew Pearce attempt to spice up the franchise by taking the action to Samoa at one point, and it works admirably. The only thing I wanted to watch almost as much as The Rock flexing so hard he bursts out of his arm cast is The Rock doing the Haka (or the Manu Siva Tau, as it were) and hitting bad guys with Polynesian war clubs. That’s a hell of a draw, and it would’ve been nice to get more of it. Surely we could’ve cut some crotch trauma to make room for more than a few seconds of Siva Tau?

The worst parts of Hobbs & Shaw are the (few) times it clings to the thin pretext that this is still a franchise based on street racing — like the idea that Hobbs’ brother, played by Cliff Curtis, owns a custom shop. This franchise never would’ve cast a brilliant character actor like Curtis when it was still a street-racing franchise, and mumbling about “family” was Vin Diesel’s thing. The Rock’s thing is wiggling his eyebrows and delivering redneck uncle lines about how far he’s going to stick his boot up your ass with a thousand percent more charisma than they deserve.

Mostly though, Hobbs & Shaw eschews these kinds of “themes.” Themes? The theme of the Fast and Furious is that it’s a glorious, idiotic, absurd waste of extravagant sums of money, from which you can’t look away.

‘Hobbs & Shaw’ opens this weekend in theaters nationwide. Vince Mancini is on Twitter. You can access his archive of reviews here.

Source: https://uproxx.com/movies/hobbs-and-shaw-review-the-rock-jason-statham/
Droolin’ Dog sniffed out this story and shared it with you.
The Article Was Written/Published By: Vince Mancini