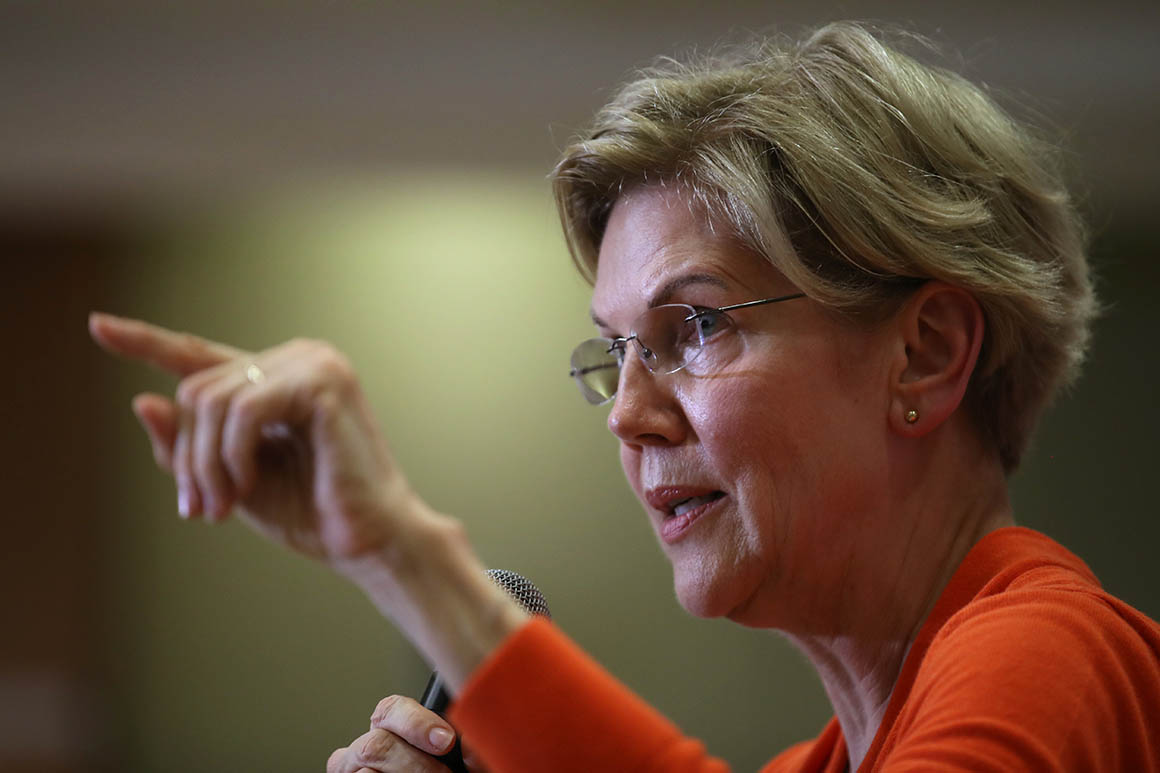 The sweeping trade agenda, posted on Medium ahead of a town hall in Toledo, Ohio Monday evening, channels many of the critiques of American trade policy from the left over the past several decades, especially from environmental and labor groups. The new approach embraces some of Trump’s protectionist rhetoric and would amount to a dramatic shift in Democratic trade policy from the administrations of Obama and Bill Clinton, as well as George W. Bush.

Warren’s plans lists nine separate criteria a country has to meet before negotiating a trade deal with the U.S. Those standards include upholding and enforcing the labor rights laid out by the International Labour Organization, eliminating all domestic fossil fuel subsidies, fulfilling commitments from the Paris Climate Agreement, not running afoul of the State Department’s Country Reports on Human Rights, and not being on the Treasury Department’s monitoring list for manipulative currency practices.

The requirements would apply not only to new trade deals but to existing treaties that Warren pledges to renegotiate.

Taken together, Warren’s mandates would fundamentally change American trade policy, potentially excluding many countries that would see the requirements as too onerous and transforming existing trade relationships. Warren’s policies would also likely face resistance in Congress from Republicans opposed to her environmental standards and from more moderate, trade-friendly Democrats.

“For decades, big multinational corporations have bought and lobbied their way into dictating America’s trade policy,” Warren wrote, calling the policies across Republican and Democratic administrations a “failed trade agenda.”

“Trade can be a powerful tool to help working families but our failed pro-corporate agenda has used trade to harm American workers and the environment. My plan represents a new approach to trade — one that uses America’s leverage to boost American workers and raise the standard of living across the globe.”

Trump’s success in the Rust Belt after his departure from the free trade policies of his Republican predecessors has forced a reckoning within the Democratic Party over its own trade policies. The key question is whether the party should embrace a more protectionist approach — Trump, most notably, threatened or imposed tariffs and withdrew from the Trans-Pacific Partnership — or contrast themselves with the president by defending the free trade policies of his predecessors.

Warren, a fierce opponent of TPP during the Obama administration, believes that the backlash to globalization is deep and cuts across both parties. As a result, she is advocating a trade policy that, while less tariff-centric, in many ways goes further than Trump.

She and her team think Trump has misdiagnosed the problem. Trump’s assertion that other countries are taking advantage of the U.S. means his solution revolves around hiring tough negotiators and punishment in the form of tariffs, Warren’s team says. She, by contrast, sees multinational corporations and their influence on trade negotiations as the main culprit.

The debate within the Democratic Party has already surfaced in the presidential primary, particularly between Bernie Sanders (I-Vt.) and Joe Biden. The two veteran lawmakers were on opposing sides of the debates on NAFTA, trade relationships with China, and the TPP.

“When people take a look at my record versus Vice President Biden’s record, I helped lead the fight against NAFTA; he voted for NAFTA,” Sanders said on CNN in April. “I helped lead the fight against [permanent normal trade relations] with China; he voted for it. I strongly opposed the Trans-Pacific Partnership; he supported it.”Biden’s campaign hasn’t said whether he still supports TPP but he told the Associated Press in May that NAFTA “made sense at the moment.”

Sanders has promoted his record on trade in campaign videos and pledged not to appoint trade representatives from the corporate sector. Kamala Harris’ views on trade are less clear but earlier this year advisers suggested she embrace free trade in order to contrast herself with Sanders and Warren, according to The New York Times. The only Democratic presidential candidate who so far has made past free trade agreements like the TPP a centerpiece of his agenda is longshot former Rep. John Delaney (D-Md.).

A May Morning Consult/POLITICO poll found that most Democrats may not have such hard-line views towards trade. The poll found that 43 percent of Democrats surveyed thought trade deals had a positive impact, 25 percent held a negative view. The remainder said trade agreements had no impact or didn’t know.

Warren’s plan, however, is the most detailed of any candidate’s so far. In addition to the nine-point criteria, Warren focuses on using trade as a tool to tackle climate change and other environmental problems, offering a stark contrast to the Trump administration. Beyond requiring trade partners to eliminate domestic fossil fuel subsidies, Warren would attempt to impose a “border carbon adjustment” — an additional fee on imports made with carbon-intensive processes.

She also pledges major changes in transparency, such as publishing trade proposal drafts in the Federal Register and subjecting them to public comment, as well as making negotiating texts public. Warren wrote that she would only seek expedited trade authority after unanimous approval from labor, consumer, rural, and regional advisory committees and would let more congressional committees review such authority. These reforms would significantly slow the trade negotiation process but also bring in voices that Warren feels have been excluded from the process.

The trade agenda is the third plan Warren has released under her “economic patriotism” platform. The first two plans called for rebuilding American manufacturing with a focus on green jobs and rewriting rules governing Wall Street.

The fundamental frame of Warren’s agenda, however, is such a departure from recent Democratic Party platforms that it has drawn praise from some on the right. Fox News’ Tucker Carlson approvingly read much of Warren’ first economic patriotism post verbatim when she released it.

“She sounds like Donald Trump at his best,” he said on his show in a monologue that caught the attention of Trump’s reelection campaign.

As has been proven true with the Trump administration, Warren highlights that much of what she is calling for can be done without congressional approval. “The President has a lot of authority to remake trade policy herself,” she wrote. “When I’m elected, I intend to use it.”

Source: https://www.politico.com/story/2019/07/29/elizabeth-warren-trump-trade-2020-1439186
Droolin’ Dog sniffed out this story and shared it with you.
The Article Was Written/Published By: ABehsudi@politico.com (Adam Behsudi)