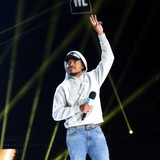 Chance The Rapper has announced a major North American tour in support of his new album The Big Day, which was released last Friday. The tour will kick off in September in San Francisco, with stops in Los Angeles, Las Vegas, Washington, D.C., Atlanta, Houston, and New York City. It will run deep into the…

Source: https://www.spin.com/2019/07/chance-the-rapper-announces-north-american-tour/
Indie Brew found this story and shared it with you.
The Article Was Written/Published By: Israel Daramola