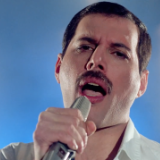 Back in 1986, Freddie Mercury recorded a song called “Time” for a musical of the same name, masterminded by Dave Clark (former leader of the Dave Clark Five). Mercury didn’t appear in the musical itself, but “Time,” which had its official release on the musical’s soundtrack, proved to be a big hit, reaching No. 32 on the UK…

Source: https://www.spin.com/2019/06/freddie-mercury-time-waits-for-no-one/
Indie Brew found this story and shared it with you.
The Article Was Written/Published By: Will Gottsegen