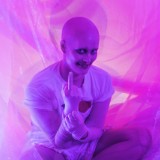 Fever Ray, the solo project of Karin Dreijer of the Knife, has announced a new album entitled Live at the Troxy, which documents a March 2018 performance at the London venue. Dreijer was touring behind Plunge, her great second album under the Fever Ray name, and the Live at the Troxy tracklist is heavy on Plunge cuts, with a few favorites…

Source: https://www.spin.com/2019/06/fever-ray-live-album/
Indie Brew found this story and shared it with you.
The Article Was Written/Published By: Andy Cush