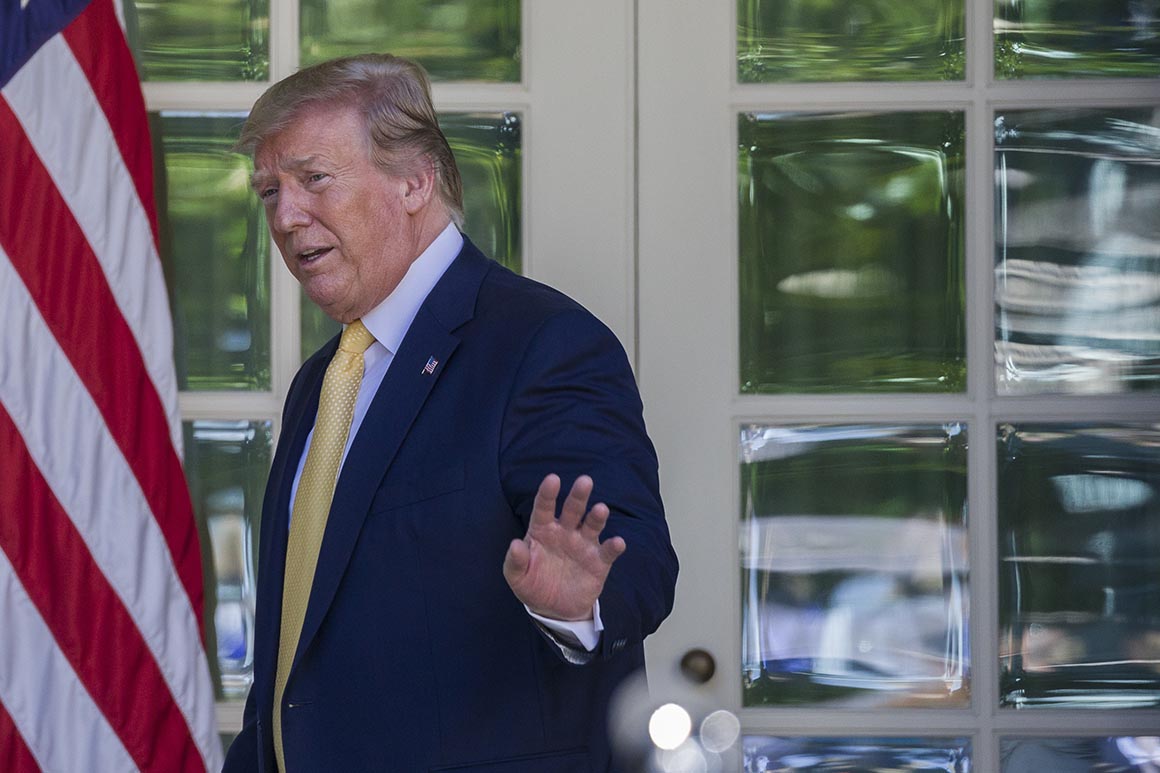 President Donald Trump pledged Monday night to begin deporting millions of undocumented immigrants who have entered the U.S. illegally and offered uncharacteristic praise for Mexico’s efforts to stem the tide of Central American migrants surging across the southern border.

“Next week ICE will begin the process of removing the millions of illegal aliens who have illicitly found their way into the United States. They will be removed as fast as they come in,” Trump wrote on Twitter.

“Mexico, using their strong immigration laws, is doing a very good job of stopping people … long before they get to our Southern Border. Guatemala is getting ready to sign a Safe-Third Agreement,” the president continued. “The only ones who won’t do anything are the Democrats in Congress. They must vote to get rid of the loopholes, and fix asylum! If so, Border Crisis will end quickly!”

Trump’s tweet, which came one day before a planned rally in Orlando, Fla., to kick off Trump’s re-election campaign, was a departure from ICE‘s normal practice of keeping enforcement operations closely held until they’ve been executed.

The president’s ICE comment comes amid signs of rising concern within his administration about his ability to keep government secrets. One hour after the ICE tweet the president followed with another denying a June 15 New York Times report that Pentagon officials refrained from briefing him in detail on recent U.S. cyberattacks against Russia’s power grid “for concern over his reaction — and the possibility that he might countermand it or discuss it with foreign officials, as he did in 2017 when he mentioned a sensitive operation in Syria to the Russian foreign minister.”

Trump’s ICE comments publicized a planned Immigration and Customs Enforcement operation targeting Central American families and recent arrivals, according to three people familiar with the plan. They appeared to elaborate on a comment earlier this month by newly-installed acting ICE Director Mark Morgan that ICE will intensify enforcement against migrants already living in the United States, including families.

“We don’t exempt anybody,” Morgan said. “I don’t think you want the director of ICE exempting a demographic that is in violation of our immigration laws based on my own political, personal ideology or moral stance.”

The idea of targeting Central American families first surfaced publicly a little more than a year ago when then-acting ICE Director Thomas Homan broached it during a May 2018 House Homeland Security subcommittee hearing.

“Of course, I expect a lot of letters saying, ‘Why are we targeting families and not criminals?’” Homan said. “But if they’re given their due process and a federal judge makes their decision, if we don’t execute those decisions, there’s no integrity in the system.”

But Homan retired the following month, and the plan stalled under then-Secretary Kirstjen Nielsen and Homan’s predecessor at ICE, Ronald Vitiello. White House senior adviser Stephen Miller agitated to move forward with the plan despite their reservations, according to a former DHS official familiar with the situation.

“Stephen wants to do things that are inconsistent with what’s operationally feasible,” the official said, and Nielsen was going to have to explain the policy to the public and to Congress. “She had reasonable questions about what it meant,” the person said.

Both Nielsen and Vitiello were jettisoned in April as part of a broader shakeup at the Homeland Security Department. Trump vowed at the time to go in a “tougher direction” at ICE before appointing Morgan, a former Border Patrol chief and Fox News commentator who in January said on “Tucker Carlson Tonight” that “I’ve been to the detention facilities where I’ve walked up to these individuals that are so-called minors, 17 or under. And I’ve looked at them and I’ve looked at their eyes, Tucker — and I’ve said that is a soon-to-be MS-13 gang member. It’s unequivocal.”

The administration of former President Barack Obama similarly targeted Central American families for deportation in late 2015 and early 2016, but those operations dealt with arrest totals in the hundreds, not the “millions” promised by Trump on Monday night.

Whether ICE could feasibly target millions remains unclear. The Trump administration has petitioned Congress in recent weeks for more than $300 million to expand ICE detention bed capacity as part of a broader $4.5 billion supplemental funding request to deal with the influx of migrants at the border.

Regardless of the scale, the optics of family arrests could be reminiscent of Trump’s “zero tolerance” policy, which split apart thousands of parents and children from April until June 2018.

“If they’re not careful how they do this, some of these images could be truly awful,” said a current DHS official. “I’m talking about having social services involved, I’m talking about detaining parents.”

Still, an operation that goes after recent Central American entrants who have exhausted their options to remain could send a message to prospective crossers, according to John Sandweg, a former acting ICE director during the Obama administration.

“If done right, it’s probably not a bad idea to ensure that there’s some integrity in the process,” he said.

But the arrests should focus on people who already “had a shot at their claims,” Sandweg said, and not migrants who were ordered deported because they didn’t appear for an immigration court hearing.

ICE doesn’t typically announce enforcement operations before they occur, and Trump has rebuked sharply those who give advance warning. In early 2018, the president criticized Oakland Mayor Libby Schaaf, a Democrat, for releasing information about a planned immigration raid in her area. Trump later suggested that the Justice Department consider pressing federal charges against Schaaf.

Sandweg said ICE operations are kept secret for the safety of officers tasked with arresting migrants.

“If you’re doing an operation like this, the last thing you do is announce it,“ he said. “We wouldn’t even tell Congress for fear that it would leak.”

Trump’s praise for Mexico and mention of a broad asylum deal comes after U.S. and Mexican officials struck a June 7 agreement to increase border enforcement in both countries. The president had threatened to impose a slate of escalating tariffs on America’s southern neighbor if Mexico did not take more drastic measures to curb the flow of migrants traveling through Mexico and into the U.S. from countries including Guatemala, Honduras, and El Salvador.

The Trump administration announced in March that it would eliminate hundreds of millions of dollars in foreign aid to the three Northern Triangle nations. But the State Department said Monday it would reduce those cuts and provide roughly $432 million in aid previously allocated in fiscal year 2017.

The remaining sum of the aid will be withheld until the U.S. determines whether the Central American countries have acted sufficiently to address the mass migration, according to the Trump administration.

Source: https://www.politico.com/story/2019/06/18/trump-deportation-illegal-aliens-1367012
Droolin’ Dog sniffed out this story and shared it with you.
The Article Was Written/Published By: qforgey@politico.com (Quint Forgey)