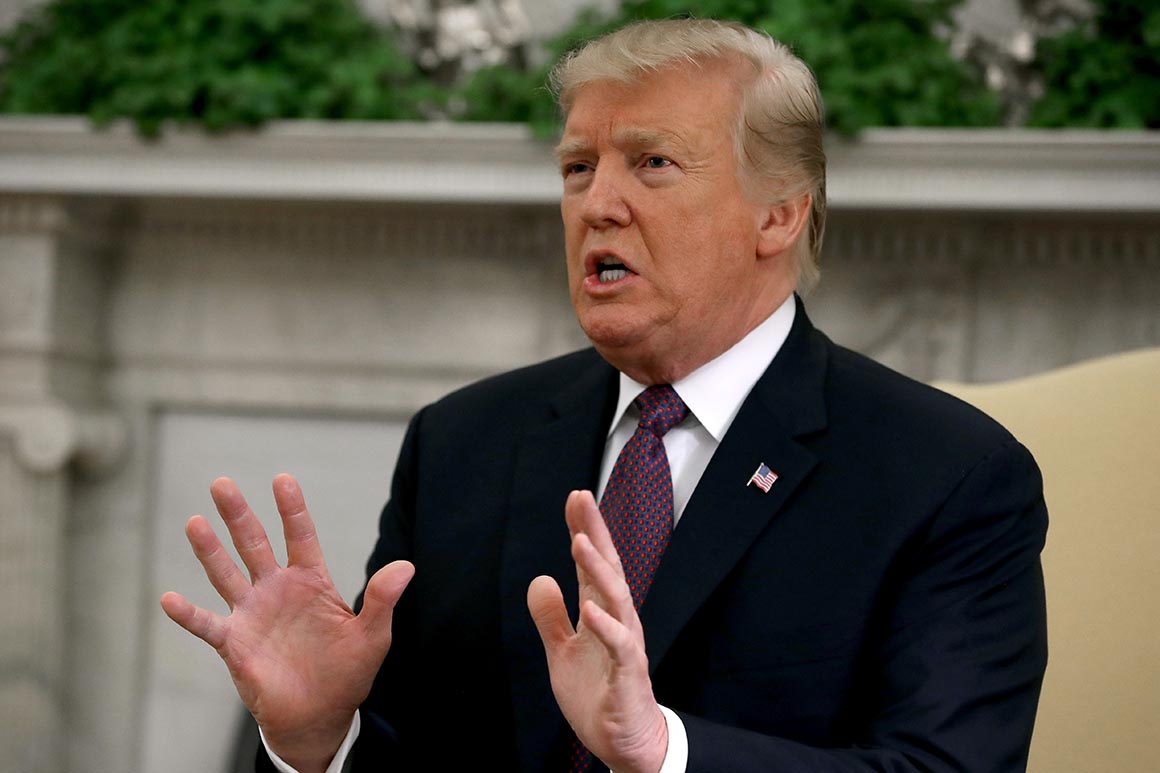 President Donald Trump is at a make-or-break moment with Iran.

Tehran has said it will soon take steps that likely violate the 2015 nuclear deal Trump himself abandoned, an announcement that came just days after the U.S. accused the Islamist-led country of sabotaging international oil tankers. In Europe, meanwhile, leaders are starting to acknowledge that they may have to walk away from the nuclear agreement or devise a new one.

The confluence of events will test Trump’s weak appetite for military action, his ability to rally allies he has frequently snubbed and his seriousness about actually striking the “better” deal with the Iranians that he once promised. Along the way, Trump must win over officials well-aware of his history of misstatements and uneasy about relying on U.S. intelligence when a potential new Middle East war could result.

“President Trump has been trying to put maximum pressure on Iran with minimum cost for the United States. Iran is trying to force one of these two to give,” said Blaise Misztal, a Middle East watcher at the Hudson Institute. “Iran is pushing back as hard as it can on the United States while keeping the charm on for the Europeans. This is a tried-and-true Iranian strategy of driving wedges in the international community.”

Trump pulled out of the international nuclear pact in May 2018 and re-imposed stringent economic sanctions, a decision that angered European leaders. On Monday, an Iranian official said that within 10 days the country would go above the 300 kg of low-enriched uranium it is allowed to keep under the nuclear deal. The official also warned that the country may start enriching uranium above limits allowed by the deal.

The Iranian announcement coincided with a meeting in Luxembourg of European foreign ministers, who pressed Iran to keep adhering to the 2015 deal, which lifted sanctions on the country in exchange for curbs on its nuclear program. EU officials said they would rely on the International Atomic Energy Agency to declare if and when Iran is violating the deal.

“Our focus is to keep the agreement in place,” Mogherini said.

Diplomats at the gathering said, however, that if the IAEA were to declare Iran in violation, European countries could follow the U.S. in abandoning the deal or try to negotiate a new pact. It’s not clear what other major parties to the deal, China and Russia, would do.

Iranian President Hassan Rouhani last month gave the international community until July 7 to come up with new terms for the deal as a way to shield the Iranian economy from the brunt of U.S. sanctions. A European attempt to devise a “special purpose vehicle” to help Iran by giving would-be investors a financial workaround has sputtered so far.

European officials are reacting cautiously to American allegations that Iran is behind a recent series of explosions targeting oil tankers in the Middle East. Trump and his aides have sent mixed signals about whether the U.S. is willing to retaliate against Iran with a military strike.

The tensions have led Trump’s critics to warn that any military action could easily spiral out of control in a region already mired in civil wars, terrorist activity and other instability.

Trump’s personal history of stretching the truth and some of his aides’ past calls for regime change in Iran have alarmed critics who say his administration cannot be trusted. The continuing fallout from America’s 2003 invasion of Iraq, spurred by faulty intelligence, also looms over the Iran debate.

And Trump’s willingness to fight with European nations on other fronts — such as by imposing trade tariffs, questioning the value of the NATO military alliance and trying to derail efforts to combat climate change — have strained ties with even the strongest of allies.

Britain, whose intelligence services agree that Iran is likely the culprit in the oil tanker attacks, is among those allies warning of the perils of a war. U.N. Secretary General Antonio Guterres has called for an independent investigation of the oil tanker attacks. German Foreign Minister Heiko Maas also preached caution on Monday, declaring that despite the conclusions of U.S. and British intelligence, “we need to treat all that in a very meticulous manner.”

“We continue to gather information … in a situation like this we need to be very meticulous and we are taking the time that we need,” he told reporters while in Luxembourg.

Alex Vatanka, a senior fellow with the Middle East Institute, said Trump may decide to simply stage a limited military strike on an Iranian target to draw a line in the sand, knowing that he does not need the approval of other nations.

“I think we might get close to a point where he does a limited strike to say, ‘I’m not just bluster,’” Vatanka said, noting that Trump’s electoral base might support such a short-term move. “But so much will depend on Iranian actions, too.”

So far, Trump has engaged in a campaign to pressure Iran’s government through crippling economic penalties, which also apply to other countries and international companies that do business with Iran. As part of this “maximum pressure campaign” the U.S. is threatening to sanction other nations that buy Iranian oil.

The moves have angered France, Britain, Germany, Russia and China, the other parties to the nuclear deal, who noted that Iran had not violated its terms. China has hinted that it will not zero out its Iranian oil purchases.

Trump has insisted the 2015 deal — negotiated under his Democratic predecessor, Barack Obama — is too narrow in scope and bemoaned its clauses that expire.

The president had hoped that the economic pressure would force Iran to renegotiate the deal so that it would be more comprehensive, curbing Iran’s non-nuclear military activities, too. But thus far, the Iranians have resisted his entreaties to talk, even as the U.S. sanctions have badly damaged their economy and scared off international investors. And Trump recently said on Twitter that it was “too soon to even think about making a deal.”

“They are not ready, and neither are we!” he added.

In the wake of Iran’s announcement Monday, Trump weighed in obliquely on Twitter by simply tweeting what appeared to be a headline: “Iran to defy Uranium Stockpile Limits”.

Pompeo previously laid out 12 conditions Iran must meet as part of any potential deal. Iran’s leaders say the requests are so far-reaching that the U.S. is actually actually seeking regime change, not an updated nuclear deal.

The Trump administration officially denies it wants regime change, saying it just wants a change in the regime’s behavior. There’s little sign, however, that it has put any significant effort into drafting details of a “better” deal that would curb Iran’s overall military activities and would be acceptable to Tehran.

Jacopo Barigazzi contributed to this report.

Source: https://www.politico.com/story/2019/06/17/iran-trump-deal-1366736
Droolin’ Dog sniffed out this story and shared it with you.
The Article Was Written/Published By: Nahal Toosi