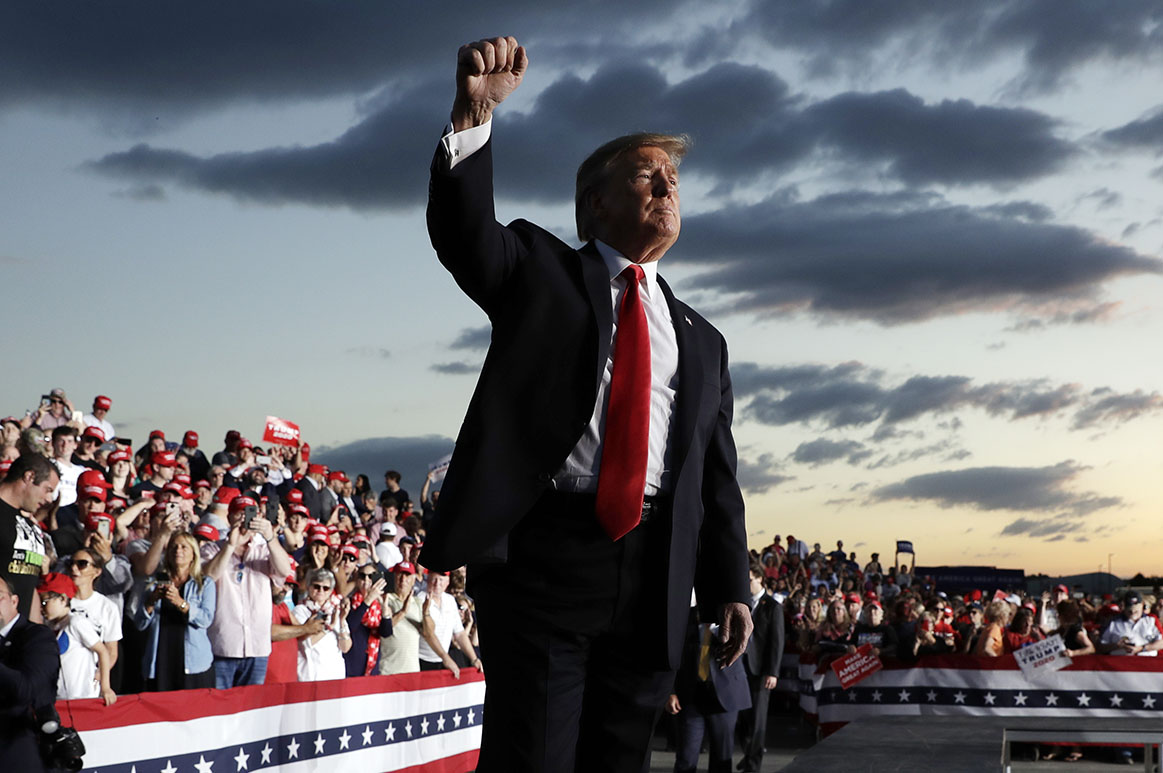 President Donald Trump is facing a hurdle no other president has — an unprecedented onslaught of investigations into almost every recent organization he has led.

In California, investigators are examining some of the more than $100 million in donations to Trump’s inauguration. In New Jersey, they’re looking into the treatment of employees working at a Trump resort. And in New York, they’re scrutinizing Trump’s now defunct foundation.

In total, Trump faces at least 15 criminal or civil inquiries by nine federal, state and city agencies into his business, his charity, his campaign, his inaugural committee and his personal finances.

As he launches his campaign for a second term on Tuesday, Trump doesn’t plan to avoid talking about the investigations. Unlike most other candidates who face allegations of wrongdoing, he hopes to use them as part of a strategy that he hopes will help win him re-election.

Trump plans to characterize the investigations in these blue states — just like those by special counsel Robert Mueller and congressional investigations — as attacks by the same people: Democrats, the media and his critics. To his backers, it’s already been a winning strategy.

“He’s actually thriving off of these investigations because he’s turned it into a so-called witch hunt where he’s using these to his advantage to show that the establishment deep state, along with the media, is trying to derail his efforts to change the way things are done,” Republican strategist Ron Bonjean, who has advised the Trump White House. “That plays to his benefit.”

While congressional investigations have garnered most of the splashy headlines in recent months, it’s these outside investigations that are more dangerous politically in many ways, even as they plod along quietly behind closed doors. They may result in criminal indictments or civil penalties, leading to a burst of negative publicity that could drop unexpectedly in the months and weeks before the 2020 election.

“The risk is high,” said Andy Wright, who worked on responding to investigations in the Obama and Clinton White Houses and has worked for the House Oversight Committee. “They could yield very significant developments.”

While the individual state and federal investigations have been reported on, the full scope has not been previously tallied.

Trump’s inaugural committee is under the most scrutiny from investigators, facing five different probes.There are investigations going on in both the Southern and Eastern District of New York, as well as in the Central District of California. Additionally, the attorneys general in both New Jersey and Washington, D.C., are examining the inauguration. The investigations are mostly examining whether foreign donors illegally contributed money to the inaugural committee, and whether the organization misspent any money.

Four entities are investigating Trump’s family company, the Trump Organization. The company — which is comprised of more than 500 businesses — has been accused of federal labor violations, as well as bank and insurance fraud. Trump still owns his business but placed his holdings in a trust designed to hold his assets. He can receive money from the trust at any time.

Trump’s charitable organization, the Trump Foundation, has not escaped scrutiny, either. Even though the foundation was forced to dissolve, it is still being investigated for potentially spending money on Trump’s company or campaign. The New York Department of Taxation and the New York attorney general are both on the case.

Even the Trump campaign, nearly three years after the 2016 election, is still grappling with government probes. Federal prosecutors in the Southern District of New York are examining whether the campaign illegally coordinated with Rebuilding America Now, a pro-Trump super PAC, as well as the much-publicized hush money payments Trump’s team made to two women over allegations of extramarital affairs with Trump. 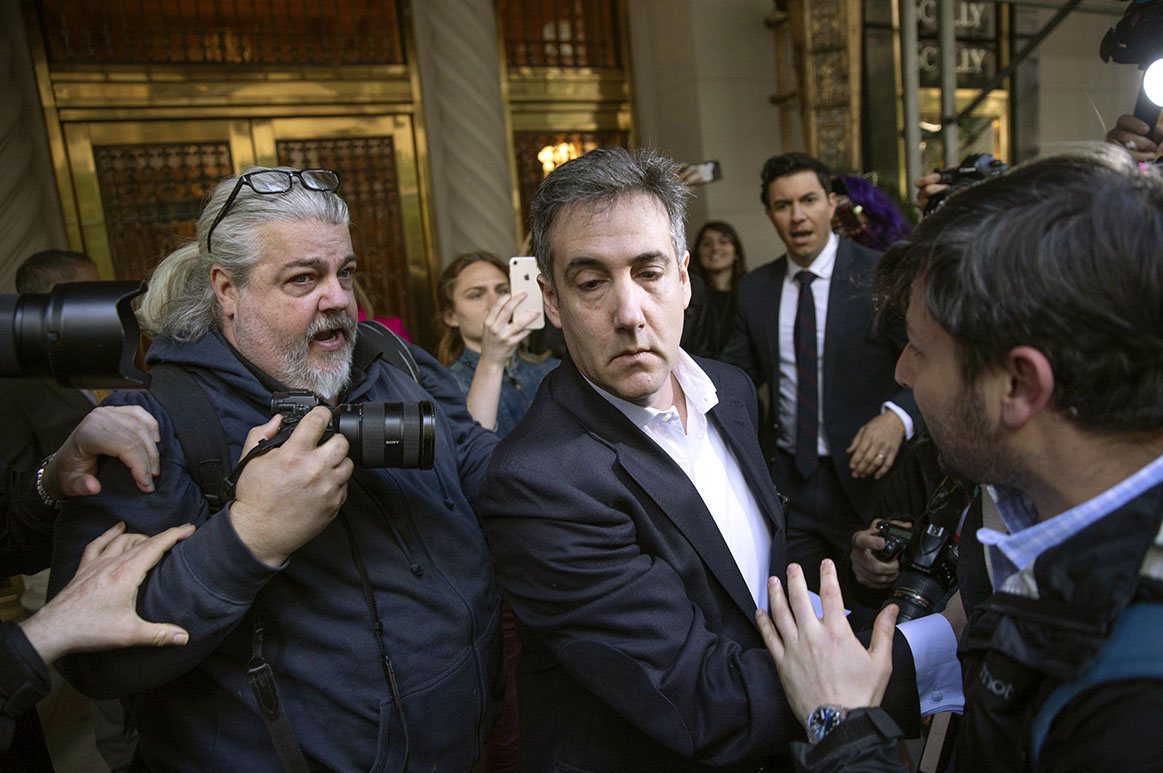 “There’s never been anything like this before,” said Neil Eggleston, a former White House counsel to President Barack Obama.

Recent presidents of both parties, including Obama and George W. Bush, faced their own investigations as they campaigned for re-election. But most of these probes began and ended on Capitol Hill. Even President Bill Clinton — who was impeached in his second term after an inquiry that started out about a failed real estate deal resulted in misstatements Clinton made under oath about an affair — didn’t face this many outside inquiries.

Peter Zeidenberg, a former federal prosecutor who handled cases against public officials, including former Vice President Dick Cheney’s chief of staff, Scooter Libby, said Trump’s situation stands out. Unlike prior administrations, he noted, these cases are all about the president and his personal businesses — not those of his staff.

“We’ve seen nothing on this scale,” he said.

The criminal and civil investigations into Trump’s organizations exist in addition to the many attention-grabbing cases involving his associates, including his former personal lawyer Michael Cohen, the ex-Trump campaign chairman Paul Manafort and Trump’s first national security adviser, Michael Flynn.

Most of the investigations stemmed from Mueller’s investigation, which did not establish a criminal conspiracy between the Trump campaign and Russian intermediaries attempting to interfere with the election. Mueller also laid out evidence of Trump attempting to obstruct justice but declined to make a decision on whether his actions were criminal. The rest of the probes arose from news reports.

A Trump campaign official described Trump’s response as less of a campaign strategy and more of an “understandable reaction” to the allegations.

“Anyone knows anything about this president knows he fights back,” the official said.

But others close to the Trump campaign and White House said the president has developed a winning strategy over the last two years that has helped defuse the Mueller and House investigations.

“It’s an evolution of building one thing after another and seeing how people have reacted,” said one informal adviser. “I don’t think anyone has been able to thrive off being attacked like he has.”

In his public comments, Trump lumps all the investigations together into one attack line, regularly hitting the theme at his campaign rallies, often with ad-libbed lines. The subject is also a regular feature on his Twitter feed and in his exchanges with reporters.

“Even though we had artificial obstacles put in our path, even though we had phony Russian hoaxes and witch hunts and people that hate Trump and hate you — angry Democrats, all after us with all of it, and they still have it’s like little embers that are burning,” he told a crowd at a May 20 rally in Pennsylvania. “They’re going crazy.”

Trump’s campaign is also fundraising off of the investigation, blasting emails and texts to supporters and selling T-shirts printed with the words “collusion delusion” and “no collusion no obstruction.”

Bryan Lanza, who worked on Trump’s 2016 campaign and transition and remains close to the White House, said Trump doesn’t plan to shy away from talking about the other inquiries, too.

“You have to lump these together, too. They’re all the same. They’re all witch hunts,” he said. “He’s comfortable telling the American public that these are partisan hit jobs.”

But Democrats — and even some Republicans — said Trump’s strategy only appeals to his conservative base and not the suburban and independent voters who helped Democrats win back the House in 2018.

But recent polls have been mixed. A CBS News poll from May shows 53 percent of Americans have had enough of the Russia investigation but a CNN poll from June shows 54 percent of voters say Democrats are investigating Trump the right amount or too little. Most polls don’t ask about outside investigations, which have largely flown under the radar.

“Most people are sick and tired of it and don’t understand why Democrats continue to obsess in the past,” Miller said. “It’s all partisan politics.”

Source: https://www.politico.com/story/2019/06/17/donald-trump-investigations-1365910
Droolin’ Dog sniffed out this story and shared it with you.
The Article Was Written/Published By: Anita Kumar