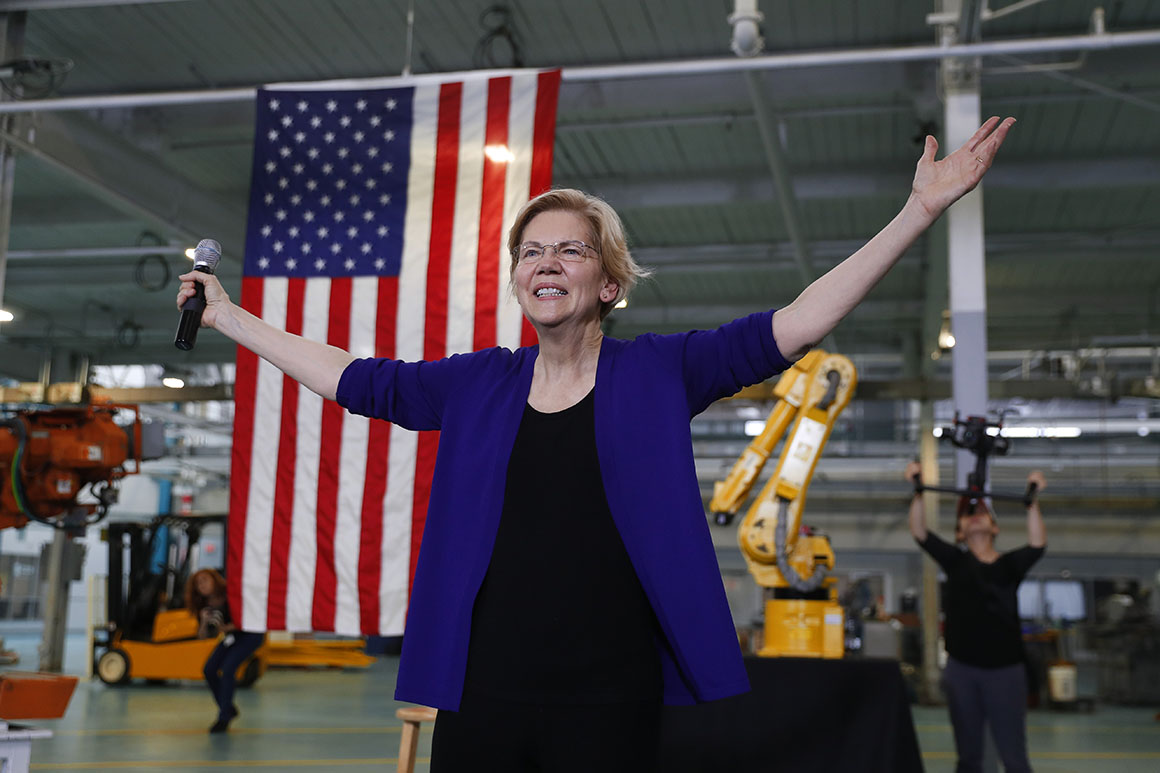 President Donald Trump’s reelection machine is setting its sights on a new target, one it had left for dead just a few months ago: Elizabeth Warren.

With the Massachusetts senator rising in polls and driving a populist message that threatens to cut into the president’s blue-collar base, the Trump campaign is training its firepower on Warren with an eye toward blunting her momentum.

Trump aides and their allies at the Republican National Committee, who initially believed their money and manpower were better focused elsewhere, are digging up opposition research, deploying camera-wielding trackers, and preparing to brand Warren as a liberal extremist. The reassessment of Warren, confirmed in conversations with more than a half-dozen Trump advisers, reflects the volatility of the massive Democratic primary and how the reelection campaign is reacting to it.

The Trump team — including the president himself — had been focused almost exclusively on Joe Biden to this point. But Warren’s rise now has them thinking she could pose a serious threat in a general election. Warren’s disciplined style, populist-infused speeches, and perceived ability to win over suburban female voters, Trump advisers concede, has raised concerns.

Campaign pollster John McLaughlin has sounded the alarm internally, stressing that Warren’s attacks on Trump threaten to undercut his support from the working-class voters who propelled him to the presidency.

“Although our own early published polls and internal polls discounted Elizabeth Warren, her recent momentum in May and June in national and early caucus and primary states into a strong second place to a flat Joe Biden is a cause for our campaign’s attention,” McLaughlin wrote in a text message to POLITICO.

“Sen. Warren’s attacks on President Trump’s policies need to be rebutted,” McLaughlin added. “We can’t just allow her to continue to attack the President in key states like Iowa, New Hampshire, Nevada and elsewhere.”

Biden will still receive a significant share of the campaign’s attention. But Trump aides say they’re less certain that he’ll be their eventual opponent.

The reelection campaign first began taking note of Warren’s momentum several weeks ago, when polling showed her gaining substantially on Biden and Sanders. They were startled earlier this month when Tucker Carlson, a host on Trump-friendly Fox News, used the opening monologue of his show to heap praise on the liberal senator.

Other pro-Trump Republican groups are paying closer attention to Warren, too. The GOP oppo research shop America Rising has placed Warren in its top tier of Democratic candidates and will prioritize putting trackers on her campaign events. The RNC, meanwhile, recently sent out a news release drawing attention to a radio interview in which Warren was pressed on her past claims of Native American ancestry.

But Trump aides are planning a barrage that extends well beyond the heritage issue, which has been the focus of Trump’s mockery and broadsides. They’re preparing to dig into her past as a professor and try to pick apart her laundry list of policy proposals.

“There’s no question that Elizabeth Warren is on the move, has momentum and could well end up as our opponent,” said Tim Murtaugh, a Trump 2020 spokesman. “We have to make sure voters know about her proposals for government takeover of health care, free health care for illegal immigrants, radical environmental restrictions, and increased taxes — all proposals that will devastate this country.”

A Warren spokesperson did not respond to a request for comment.

Warren is enjoying a renaissance after a painful campaign rollout. Trump attacked her mercilessly after she released a DNA test that attempted to put the controversy over her blood lines to rest only to reveal she’s between 1/64th and 1/1,024th Native American.

During an appearance at his Mar-a-Lago resort in March, the president lamented to donors that he knocked Warren out of the race too early and that he should have saved his jabs for later. During a late April rally in Wisconsin, the president said Warren was “finished.”

In the weeks that followed, though, the anti-Wall Street crusader engineered a turnaround with a litany of policy plans, a nonstop campaign schedule and a hard-charging populist message.

In the most recent national poll, from Quinnipiac University, Warren was at 15 percent, only slightly behind Sanders for second place. And in polls released this week of California and Nevada — two key states that vote in late February and early March, respectively — Warren leapfrogged Sanders, running behind only Biden.

The latest view inside the Trump campaign is that Warren has a more coherent message and a more passionate liberal following than Biden, whose support they see as soft. “Her politics are where the Democratic party has moved,” said Trump campaign adviser Raj Shah. “She’s primed to pick up more support as Bernie fades and Biden erodes.”

Biden and his supporters, however, are confident the Democratic electorate is more centrist than prognosticators think.

Not everyone agrees that going after Warren is the right move. Some Trump aides contend that her liberal positions would make her an easier general election opponent and that they should hold off on attacking her. Others, however, argue that guessing a particular candidate’s level of electability is impossible and that the Democratic nominee — no matter who it is — needs to be defined well before next year’s convention.

“Now I see that Pocahontas is doing better,” the president said during a Friday morning appearance on Fox News, using his favorite nickname for the Massachusetts senator. “I would love to run against her frankly.”

Source: https://www.politico.com/story/2019/06/15/donald-trump-elizabeth-warren-2020-election-1365816
Droolin’ Dog sniffed out this story and shared it with you.
The Article Was Written/Published By: aisenstadt@politico.com (Alex Isenstadt)