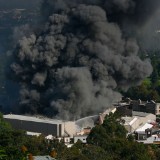 At least 10 artists whose master recordings may have been destroyed in a 2008 fire at a storage facility on the grounds of Universal Studios Hollywood plan to sue Universal Music Group, the Los Angeles Times reports. Attorney Howard King told the newspaper that his firm King, Holmes, Paterno & Soriano plans to file lawsuits…

Source: https://www.spin.com/2019/06/universal-music-group-fire-lawsuit/
Indie Brew found this story and shared it with you.
The Article Was Written/Published By: Tosten Burks