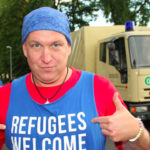 Germany’s parliament adopted the first part of a new legislation packet to restrict the rights of asylum-seekers and refugees in Germany, denying them the right to work, sending them to prison once room in the deportation centers runs out, and even allowing apartment raids in search of “illegal” immigrants

Source: https://therealnews.com/stories/germany-passes-deportation-legislation
Droolin’ Dog sniffed out this story and shared it with you.
The Article Was Written/Published By: Jocelyn Dombroski