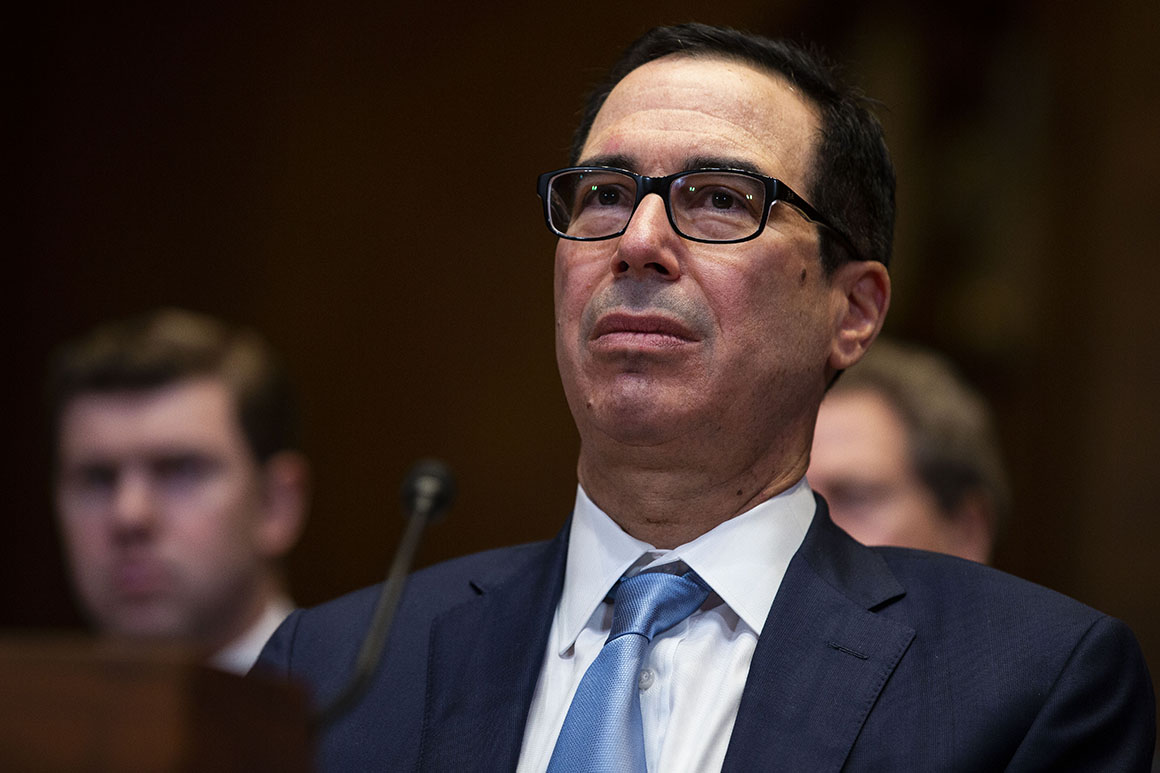 Federal tax payments by big businesses are falling much faster than anticipated in the wake of Republicans’ tax cuts, providing ammunition to Democrats who are calling for corporate tax increases.

The U.S. Treasury saw a 31 percent drop in corporate tax revenues last year, almost twice the decline official budget forecasters had predicted. Receipts were projected to rebound sharply this year, but so far they’ve only continued to fall, down by almost 9 percent or $11 billion.

Though business profits remain healthy and the economy is strong, total corporate taxes are at the lowest levels seen in more than 50 years.

At the same time, overall taxes paid by individuals under the new tax law are up so far this year by 3 percent, thanks to higher wages and salaries, according to the Congressional Budget Office. Last year tax payments by individuals went up 4 percent.

The drop comes even as some Republicans, such as Treasury Secretary Steven Mnuchin, have claimed, dubiously, that the law will pay for itself.

The revenue decline may fan complaints the law gave too much to big business and provide new fodder for Democrats now trying to roll back the cuts. Sen. Elizabeth Warren, a Democratic presidential candidate, is calling for a dramatic increase in corporate taxes while House Ways and Means Chairman Richard Neal (D-Mass.) has proposed hiking the corporate rate by a percentage point to help pay for expanded breaks for low- and middle-income people.

Analysts agree they can’t yet explain the decline in corporate tax payments.

They have a host of theories though, such as businesses making wider-than-expected use of the law’s expanded breaks for business investments. It may also be an unexpected side effect of President Donald Trump’s trade wars.

“I don’t think any of us can point to something specific and say this is definitely what’s going on,” said Kyle Pomerleau, chief economist at the Tax Foundation.

Analysts expected corporate payments to fall in the wake of the Tax Cuts and Jobs Act, which slashed the corporate tax rate by 14 percentage points, to 21 percent, and expanded breaks for buying machinery and equipment.

In April 2018, less than four months after the cuts were signed into law, the nonpartisan CBO predicted corporate receipts would drop that year to $243 billion, which would have been an 18 percent decline from 2017. But payments ended up coming in at $205 billion, a nearly one-third decline from the previous year.

Then, in January, CBO projected receipts would bounce back this year, increasing by 20 percent or $40 billion. But through last month, they’re down 8.7 percent.

“Weakness in corporate tax collections” goes “beyond that which can be explained by currently available data on business activity,” the agency says.

One reason, CBO says, could be that companies shifted deductible expenses — like funding for their workers’ pensions — into 2017, when the corporate rate was still 35 percent, because that made those deductions worth more. That would still show up in the government’s data for the 2018 fiscal year, which began in October 2017. The agency doesn’t know the extent to which that might be happening.

Other analysts see other possibilities.

Companies may be making greater use of so-called expensing, an incentive that allows them to immediately write off the cost of investments rather than having to stagger them over a number of years. Having more stuff to deduct means smaller tax bills. If that’s the case, it could mean receipts will rebound in coming years because companies will not have those write-offs available to them in the future.

Another potential explanation: Trump’s tariffs, which could hurt corporate tax revenues in two ways. If a U.S. company that relies on components made in China suddenly sees the cost of those items increase, it will have more to deduct as business expenses. Alternatively, if a company is seeing fewer sales because it is passing along the cost of the tariffs to its customers, it will have fewer profits to tax.

“You either reduce business receipts or increase deductible costs, and either of those things reduce corporate taxable income,” said Pomerleau. “It may mean corporate tax liability is lower than we expected not because our projections of the TCJA were wrong, but maybe because we didn’t account for the fact that tariffs were going to lower corporate receipts.”

A fourth possible factor: The law isn’t reducing profit shifting by multinational corporations as much as forecasters expected. By cutting the corporate rate, the Tax Cuts and Jobs Act was supposed to reduce the incentive for companies operating in multiple countries to stockpile profits abroad, out of the reach of the IRS.

Overall corporate revenues last year amounted to 1 percent of GDP, a level they’ve dipped to only twice since 1965. Both of those previous instances, in 2009 and 1983, came in the wake of recessions, when business profits had cratered.

Source: https://www.politico.com/story/2019/06/13/big-businesses-pay-less-tax-law-1364591
Droolin’ Dog sniffed out this story and shared it with you.
The Article Was Written/Published By: bfaler@politico.com (Brian Faler)