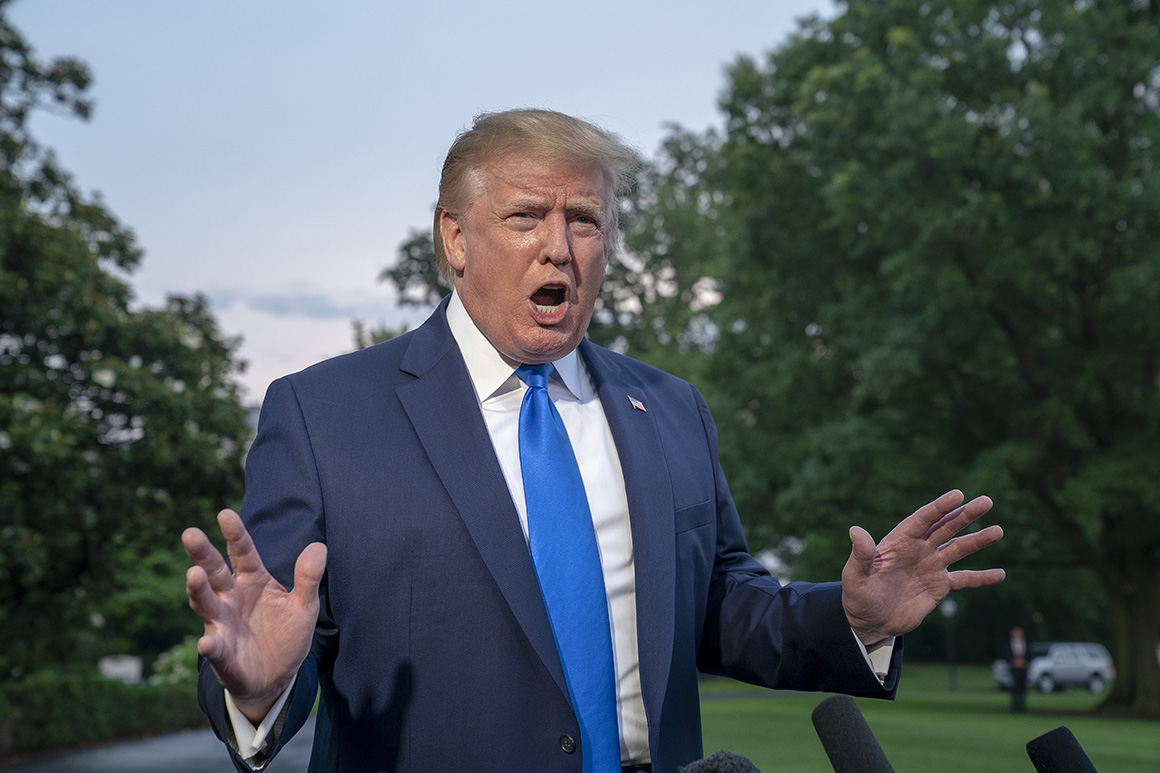 President Donald Trump has no direct control over his impeachment, but that’s not stopping him from trying to weaponize the process.

It’s shaping up to be a classic Trump scheme — counterattack, demean the opposition, predict absolute victory, reduce the argument to a few talking points, and never, ever, cede ground. And it’s a messaging strategy born of necessity. Since Trump and his team have no say in whether Democrats launch impeachment proceedings, they’re trying instead to bend the chatter around the issue to their advantage, knowing the topic will dominate the national conversation as the 2020 election ramps up.

A dozen people around Trump said the approach is rooted in recent history and the president’s own love for a fight. Trump has discussed with aides how a cascading series of investigations helped propel President Bill Clinton to a second term in 1996 and then led to historic setbacks for House Republican in the 1998 midterms when they ran on a platform to impeach the Democratic president. Trump himself is also telling people that anything House Democrats write into impeachment articles against him will fall short of the loosely defined “high crimes and misdemeanors” threshold spelled out in the Constitution, making him confident of an acquittal in the GOP-led Senate.

“Nobody wants to be impeached, but if they do it will benefit the president,” said Trump legal adviser Joseph diGenova. “They’ll be looked at as maniacs.”

Democrats aren’t convinced. Lawmakers pushing for a formal impeachment inquiry in the House Judiciary Committee say special counsel Robert Mueller’s investigation has given them all the material they need. The president must be held accountable through televised hearings, they argue.

Several Democratic 2020 White House hopefuls are making the case that it’s time to begin the impeachment process, pushing back on the post-Clinton conventional wisdom that Trump would benefit from an impeachment effort that didn’t end with his ouster.

“You know, I understand the political implications of this. But I think this moment calls for us to look beyond the politics and the polling, and even the next election,” Beto O’Rourke, one of the Democrats vying for the White House, said last month during a CNN town hall.

The fight over Trump’s potential removal has become something of a fixation for the president. Even though he branded impeachment a “dirty, filthy, disgusting word” when leaving the White House last week en route to Europe, the president often mentions variations of the term unprompted — nearly two dozen times on Twitter this year alone.

A former senior Trump White House official said the president’s impeachment chatter is a way for him to vent his frustration over the investigations that have shadowed his term. It also helps to create drama and a “diametric choice between us and them.”

“It plays into his rhetoric, but I don’t think they want to go through impeachment hell,” said the former official. “In his heart of hearts, he doesn’t want [to get impeached], but the specter of it creates that production value that’s so important to him.”

Trump’s White House counsel’s office has the most important legal role dealing with House Democrats considering impeachment. The office is fighting attempts to line up interviews and public hearings with the people in Trump’s orbit who could vividly illustrate the instances when Mueller said the president was trying to stymie the Russia probe — charges that some Democrats say merit impeachment. The office is also negotiating with Democrats over efforts to access White House and Justice Department documents tied to those instances.

But it’s the campaign team that will serve as the external megaphone in this fight, aides and advisers told POLITICO. And if Democrats do start the impeachment process, the campaign will work to amplify what they say is at stake.

“We’ll provide message support for the president and criticize the Democrats for engaging in all-out war at the cost of the country and good policy,” said one senior campaign adviser.

Tim Murtaugh, the Trump campaign’s communications director, jumped at the chance to explain how the specter of impeachment will shadow the 2020 campaign.

“Democrats have never hidden their ambition to overturn the legitimate results of the 2016 election,” he wrote in an email, while criticizing the House for staying “fixated on impeachment instead of the business they were sent to Washington to conduct.”

Trump’s confidence in this strategy stems in part from the logistical reality in Congress. While impeachment proceedings originate in the House, the Senate would need to convict the president by at least a two-thirds majority. So even if the Democratic-controlled House advanced articles of impeachment, the chances of the Republican-led Senate voting to oust Trump seems all but impossible in the current political environment.

And Trump is working to keep his GOP allies in line on impeachment. Aides said comments like the one the president made last week in London — “I have a … 94 percent approval rating as of this morning in the Republican Party” — are a not-so-veiled reminder that any Republicans voting for impeachment would be at odds with the Trump-supporting base.

“It’s a reminder that nothing is ever going to happen in the Senate. No matter what House Democrats do, it’s DOA when it goes to the other side of the Hill,” said former Trump 2016 campaign spokesman Jason Miller.

For now, House Democrats are still dancing around the fundamental question of whether to begin the impeachment process. Speaker Nancy Pelosi has resisted Judiciary Chairman Jerry Nadler’s request to kick-start the formal proceedings. Nadler has made the case that starting the process could benefit the party’s chances of defeating Trump in legal fights over access to documents and testimony.

Still, the impeachment train may have left the station. Several Democratic 2020 campaigns have weighed in to support removing Trump, including Elizabeth Warren, Bernie Sanders and O’Rourke. News organizations including The New York Times and NBC are already keeping online counts of who is for impeachment and who isn’t backing it.

Current and former Trump aides acknowledge impeachment presents the president with something of an existential challenge, too. As much as they bash Democrats, Trump’s allies realize they can’t control the outcome.

“It’s out of the hands of Republicans,” Miller said. “We can speculate what the ramifications might be should Democrats go down this road, but ultimately we can’t do anything about it.”

Trump’s “bring it on” mantra isn’t embraced everywhere. Some Republicans in the president’s orbit see impeachment as a recipe for more drip-drip coverage reminding voters of the Mueller probe, not to mention the prospect of unrelated surprise revelations. Already, Mueller’s probe uncovered details about hush-money payments Trump made during the campaign to women to cover up claims of extramarital affairs.

And the more Democrats focus on the topic, the more likely Trump will have more Twitter tantrums that further distract from his own core reelection messages.

“The problem with the impeachment proceeding is that once it opens, you don’t know what you’re going to find or what’s going to come up,” said a Republican close to the White House, who noted the mystery that remains surrounding a dozen cases Mueller referred to federal prosecutors that have yet to be revealed publicly.

Democrats say Trump’s attempts to block congressional hearings on the matter show that the president actually wants to move on, even though his resistance has only fueled more impeachment chatter.

“They’re not being subtle about it. I think they want to move past it. They don’t welcome a detailed conversation about what’s in it, nor do they welcome any new lines of inquiry or investigation,” said Michael Feldman, a longtime Democratic strategist who served as Al Gore’s traveling chief of staff during the 2000 presidential campaign.

“He realizes when it stays in the bounds of a 400-page document, it’s less dangerous than when people are exposed to what’s in it,” Feldman added.

Daniel Lippman contributed to this report.

Source: https://www.politico.com/story/2019/06/11/donald-trump-impeachment-democrats-2020-1359086
Droolin’ Dog sniffed out this story and shared it with you.
The Article Was Written/Published By: dsamuelsohn@politico.com (Darren Samuelsohn)